Rumours suggest that Apple’s upcoming new iPhone 6 will come with the additional ability to couple with a keyboard base, transforming it into a hybrid notebook in a snap.

For the first time, official confirmation of Apple’s interest in launching a convertible notebook have been released, thanks to Patently Apple, which has listed the Cupertino-based firm’s patent approval for the device.

Details of Apple’s upcoming hybrid notebook are now out, and shed light on how it is planning to counter the upcoming hybrids as well as those already available in the market today. 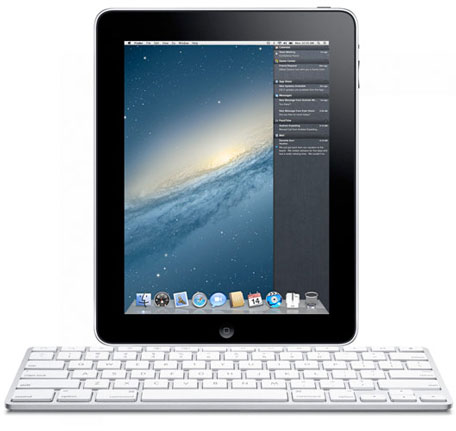 According to the patent, the notebook’s display will be both detachable from the base (like a hybrid), and will be rotatable (like a convertible).

And that’s what will be different with Apple’s iBrid. Until now, while the hybrids and convertibles have been available in the market, but they haven’t been bundled together in the same device – Apple will be attempting it with new iBrid.

The hybrid, for the uninitiated, is a tablet that turns into a laptop, or a laptop that breaks apart into a tablet. In short, it has two pieces that can work standalone as well as together. The keyboard base generally has extra ports and connections like USB, as well as an extra battery. The top part’s a tablet that’s also the screen, and its own battery, usually less powerful than the base’s.

Most hybrids available in the market – examples include HP Envy X2, Lenovo ThinkPad Tablet 2, Lenovo IdeaTab Lynx and Asus Vivo Tab – run either on the Windows 8 or the Windows RT platforms.

On the other hand, a convertible looks like a laptop, but can be swivelled around and folded backwards to make it look like a tablet.

The key difference between a convertible and a hybrid is that the parts stay together in a convertible. While convertible laptops have been around for years, Windows 8 has given the form new life with touchscreen ability. Examples include the Lenovo IdeaPad Yoga, Asus Taichi and Dell XPS Duo 12.

Then there’s also the slider (like the Sony Vaio Duo II or the Toshiba Satellite U925t) which is a special-case version of the convertible that doesn’t open up like a regular laptop; instead, its keyboard slides out and the top screen angles up, almost like a giant smartphone, to become a laptop-like device that feels more like a tablet with a permanently docked keyboard.

Until now, however, no one has successfully attempted a hybrid-cum-convertible-cum-slider in one device. Apple’s iBrid is expected to do just that.

It will be the combination of the iPhone 6, the iPad 5 and the MacBook Air in one – the ultimate mobile computing device.

We believe Apple will use the iPhone 6 XL (Read details here: iPhone 6 release rumours: Screen you can write on with a pencil… features to kill Galaxy S4?) as the display, and couple it up with the iPad 5 and the MacBook Air to transform the hybrid/convertible market.

According to the patent, when connected or coupled to the base, the display will be rotatable and may pivot from an open position to a closed position.

On the other hand, when disconnected or decoupled from the base, the display will be positioned in substantially any manner suitable by the user for viewing the display.

The patent filing includes details of a very cool display with a retractable magnetic mechanism that hides itself once detached from the MacBook’s main body. Now, on paper at least, Apple has finally revealed their first patent filing about a hybrid notebook-tablet with actual details.

The base wireless chip transmits data from the processor to the display, which suggests that it will be able to communicate with the screen even when decoupled from it. Also, early designs suggest that the device will charge both batteries – the one within the base and that in the display – simultaneously even when the two are decoupled, without the need to charge them separately. 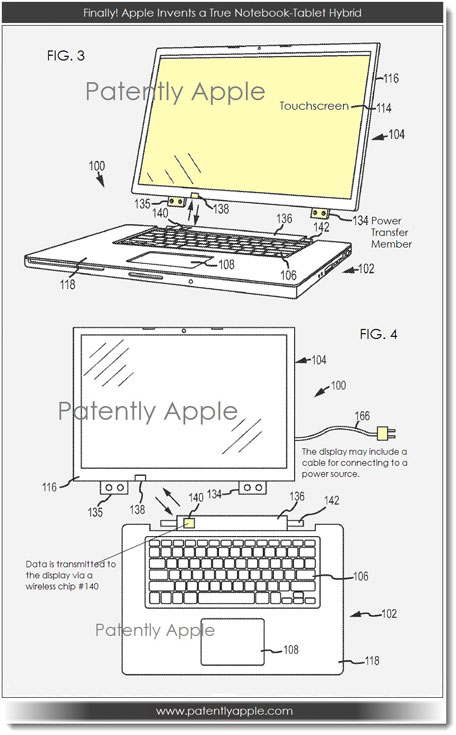 The images that Apple supplied with the patent can be misleading because this isn’t a design patent. In this case, the exact look of the end result would have been kept under wraps by Apple and the patent figure simply conveys the mechanics of the device – not its design.