When I was a kid I knew that a pebble was a stone, but today the smart watch makers have transformed its name. A simple online search will prove the point where a search for pebble will give you 90 per cent results for the new smartphone.

In fact it has been a phenomenal run for Eric Migicovsky and his team who launched their new project on the Kickstarter in 2012 and went on to receive funding worth several millions rather than the $100,000 they had initially asked for. The company has already managed to sell over 300,000 smart watches, a significant achievement for a new venture, and especially when you are competing with the likes of Samsung Gear and Sony’s smartwatch.

Although about 3 million apps and watchfaces meant for Pebble have been downloaded so far, it has all been done directly through independent third party resources. The company has now decided to launch its own dedicated app store. 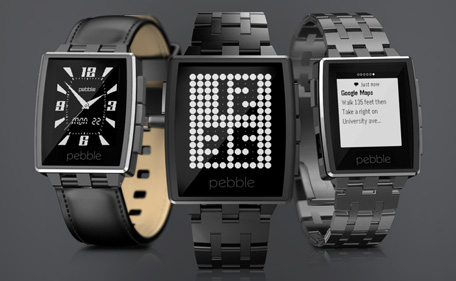 Later today the company is expected to launch its first dedicated app store in the form of a smart application on the iOS and Android app stores that will point out to various third party apps built for the smartwatch.

In its announcement earlier in January the company had hoped that the app store would be up and running by the end of the month with over 500 dedicated apps.

“We’re getting ready to launch the Pebble app store — the very first open platform for sharing apps optimized for wearables.

The app store will live within the existing Pebble app on your iOS or Android device, so you can find and download Pebble apps directly from your smartphone,” the Pebble blog post said.

“By the end of January, the Pebble appstore will offer a centralized location for users to discover, manage, and install apps and watchfaces,” it added.

Earlier this month the watch got a serious makeover when steel was introduced for the first time.

The company has started shipping the smartwatch globally, so technically you can still get the smartwatch shipped to you. Although select online retail stores like jadopado have listed the basic model originally priced at $150 for Dh799, you can still buy some used ones on souq for Dh500.