Mumbai and the National Capital Region (NCR) have lost their position as prime real estate markets in India, with Bengaluru, the Silicon Valley of the country, topping the list of most attractive real estate investment city, states a new report.

In its report titled 'Top 10 cities in the Indian real estate marke', PropEquity, a real estate data and analytics firm, said it while ranked #6 in 2009, Bengaluru has now replaced Mumbai, which is placed at #8 in 2015.

All the cities of NCR declined compared to 2009. 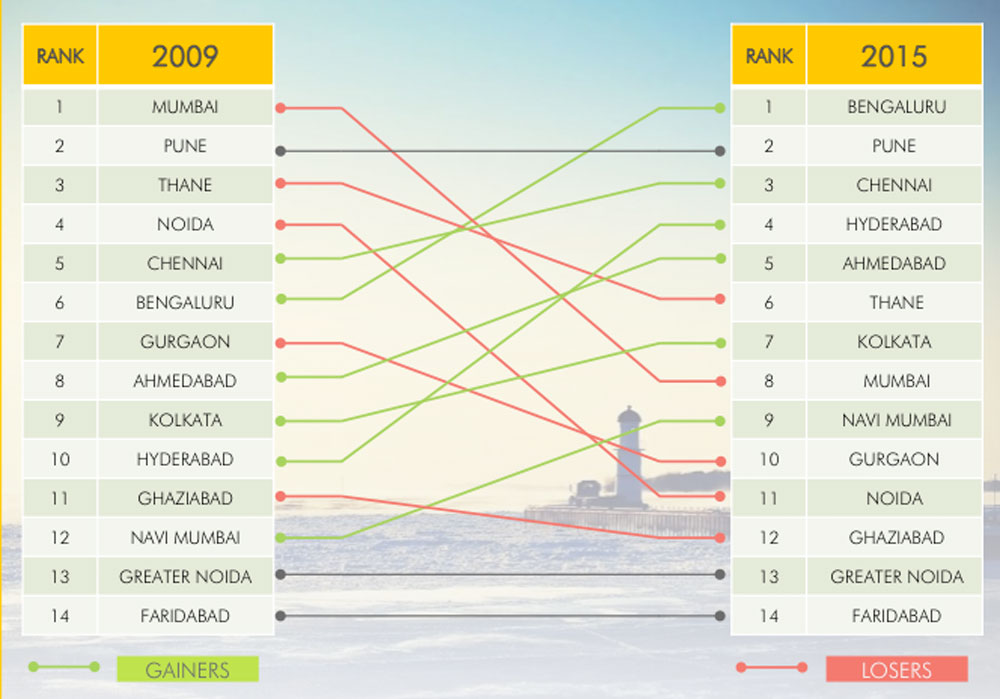 NCR’s inventory rose by 14 per cent due to increase in inventories in Noida, Greater Noida, and Ghaziabad, while MMR and Southern region saw a marginal decline.

All the five cities of NCR reported an inventory overhang of more than 50 months in 2015 with Bengaluru having the lowest overhang at 22 months, followed by Pune at 24, and Ahmedabad at 25 months.

Despite a “significant” slowdown in real estate sector in the past two years, new launch prices continued to rise, ranging from five to 16 per cent on a compounded annualized price rise (CAPR), over a four year period.

The maximum increase was witnessed in Gurgaon, with a CAPR of 16 per cent, followed by Thane at 14 per cent, and Pune and Mumbai at 12 per cent each.

Mumbai continued to be the most expensive city with weighted average price of Rs16,000 (Dh925) per square feet (psf), followed by Gurgaon at Rs6,700 psf.

Bengaluru topped the list of market size, leading with Rs360 billion of primary yearly sales, an increase 4 per cent from last year, the report added.

PropEquity, which tracks over 16,000 developers, and 65,000 projects in 40 cities across India, has based the report on indicators such as projects launched; projects offered possession; units launched; units absorbed; total unsold stock; launch price increase; inventory overhang and size of market.