Sweden's Princess Madeleine has given birth to a baby boy, her second child with husband Christopher O'Neill.

The 33-year-old princess and her husband, financier Christopher O'Neill, welcomed their second child into the world on Monday afternoon and both mother and baby are doing well.

The newborn son of Princess Madeleine and Christopher O'Neill. (Reuters)

An official statement read: "The Marshal of the Realm is delighted to announce that HRH Princess Madeleine gave birth to a son on June 15 at 1.45pm.

"Both mother and child are in good health."

It has not yet been confirmed what the little boy - a brother for 15-month-old Princess Leonore - will be named.

The new arrival will be raised in Chris' native UK as the family are preparing to move to London by the end of 2015.

The couple moved to Stockholm last year from New York, where they first met.

Madeleine - who spent four years living in America and has resided in the UK before- has previously spoken of how much she adores being married to Chris.

She has said: "The sweetest feeling now that we are married is that we really are a team. It really brings a special bond." 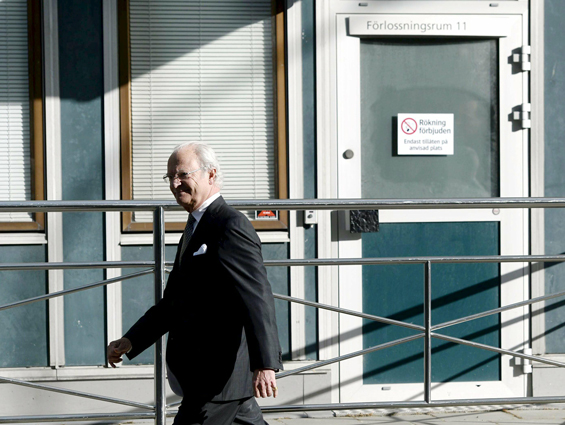 Sweden's Princess Madeleine and her husband Christopher O'Neil arrive with their daughter Leonore to the wedding of her brother Prince Carl Philip to Sofia Hellqvist at the Royal Chapel in Stockholm. (Reuters)

Princess Madeleine, Princess Leonore and Chris O´Neill arrives to the Prince Carl Philip and Sofia Hellqvist during their wedding the Royal Chapel in Stockholm, Sweden. (AP)