The Duchess of Cambridge seems to like her first official portrait, which is lucky for the artist. Many critics don't.

Paul Emsley's portrait of the former Kate Middleton shows the 31-year-old royal against a dark background, her lips pursed into a wry smile, with an ethereal light against her face and hair. Her pale complexion brings out the fine lines under the eyes, and the light adds a hint of silver to her rich brown hair. 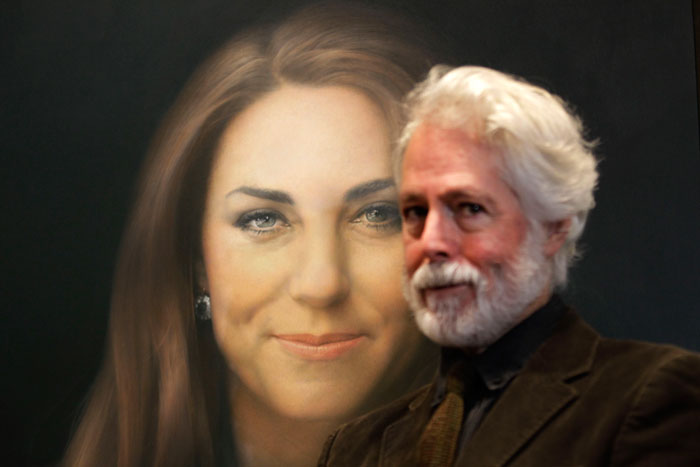 The portrait, called HRH The Duchess of Cambridge, has been painted by award-winning artist Paul Emsley who said he wanted to capture Kate's natural beauty. (AP)

Shortly after the portrait was unveiled Friday at the National Portrait Gallery in London, critics began grousing.

"It's a great, great opportunity missed," British Art Journal editor Robin Simon said. "The best thing you can say about it is that she doesn't actually look like that."

In a telephone interview, Simon said that Kate's nose was too large and that the painting drained the duchess of her sparkle.

Kate "transmits a sense of joie-de-vivre," he said. "This is dead, dead, dead."

Guardian arts writer Charlotte Higgins picked up on that theme, saying the portrait had a "sepulchral gloom" about it.

"Kate Middleton is - whatever you think of the monarchy and all its inane surrounding pomp - a pretty young woman with an infectious smile, a cascade of chestnut hair and a healthy bloom," she wrote in a post to her newspaper's website. "So how is it that she has been transformed into something unpleasant from the `Twilight' franchise?"

Emsley told reporters at the opening that it was always going to be tough painting Kate, who sat for the portrait last year, before she became pregnant.

"A person whose image is so pervasive, for an artist it is really difficult to go beyond that and find something which is original," he said. "You have to rely on your technique and your artistic instincts to do that and I hope I've succeeded."

The Duchess diplomatically said, "It's just amazing, I thought it was brilliant." (AP)

Royal portraits tend to veer between the staid and the controversial. Lucian Freud's 2001 portrait of Queen Elizabeth II remains a particularly notorious example, with some describing the heavy, severe painting of the monarch as deeply unflattering and others calling it groundbreaking.

In fairness to Emsley, some artists had praise for his work.

"I liked it, very much so," said Richard Stone, who has frequently painted members of the royal family. "So often with official portraits they can be rather stiff and starchy, but this has a lovely informality about it, and a warmth to it."

In any case, Emsley appeared to have won over his most important audience. Kate, who was with her husband, Prince William, at the gallery earlier Friday, called the portrait "just amazing." William liked it too, saying it was "absolutely beautiful."