H.H. Sheikh Abdullah bin Zayed Al Nahyan, UAE Minister of Foreign Affairs and International Cooperation, visited Expo 2020 Dubai on Thursday, and expressed satisfaction at its degree of readiness ahead of the opening in October next year.

The visit of Sheikh Abdullah comes at an important point in Expo 2020 Dubai’s preparations. With more than 190 countries and international organisations confirmed to participate for the six months of Expo, and with so much of the Expo construction completed, H.H. was able to see how the site is already coming to life. The Expo site covers a total of 4.38 sqkm, including a 2 sqkm gated area.

He enjoyed a medley of cultural performances from different nationalities, reflecting the wide array of entertainment that will enthrall millions of visitors from around the world from 20 October next year. He was welcomed with artwork proclaiming ‘Hayyakum’, the Arabic word denoting welcome.

Sheikh Abdullah noted the importance of this global platform as a significant moment for the UAE, welcoming the world for six months to demonstate its international cooperation agenda.

H.H. also remarked on the sizeable efforts being taken by countries and international organisations around the world in the design of their pavilions.

He said: "Through the efforts being taken by the Expo 2020 Dubai organising committee to bring countries together, locating them alongside one another according to their common themes and building connections between them, and with the large volume of expected visitors, our aspiration is to highlight commonalities between people, communities and cultures from around the world. This will enable them to build new connections with each other that last beyond the six months of our event."

Sheikh Abdullah added: "The World Expo comes at a unique moment in time for our region and I hope that what our youth will see when they visit will inspire a thirst to learn more about the world and about each other. They will find they have more in common than differences, and discover unity in diversity. I believe the World Expo will provide our own youth with a desire to become responsible and active members of a global community." 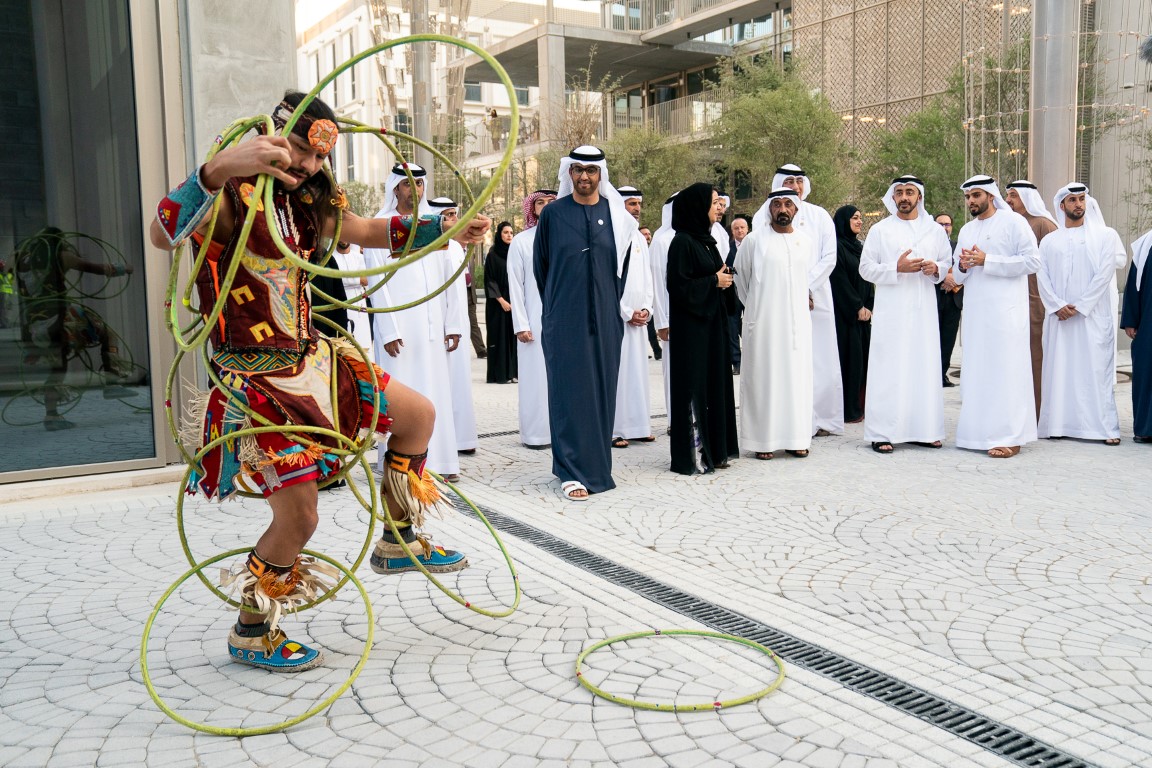 H.H. Sheikh Ahmed bin Saeed Al Maktoum, Chairman of the Expo Dubai 2020 Higher Committee, said: "We were honoured to greet H.H. today and hear his feedback on the work being conducted to bring the site to life for so many international participants and 25 million visits. His visits always inspire us."

His Highness Sheikh Mohammed bin Rashid Al Maktoum, Vice President and Prime Minister of the UAE and Ruler of Dubai, announced earlier this month a new national logo featuring the Ghaf tree, which will be used by government and private entities for campaigns, initiatives and programmes during 2019.

Sheikh Mohammed said at the time that the Ghaf, a source of life and resilience, and a symbol of stability in the middle of the desert, exemplified UAE values of hospitality, coexistence and diversity.

A lone Ghaf tree – estimated to be more than 70 years old – has been protected on the Expo 2020 site as construction has gone on around it. Standing on a raised sand area, the tree marks the original height of the landscape before it was levelled for construction to begin in early 2016.

Sheikh Abdullah, who presides over The Supreme National Committee of the Year of Tolerance, also saw a 3D representation of the Ghaf tree, the national symbol for the UAE’s Year of Tolerance 2019.

Some 35,000 workers are now working on the site and more than 60 million work hours have been completed. Several features, including many public realm spaces visited today by Sheikh Abdullah, have already been completed.

Organisers of the next World Expo, the first to be staged in the Middle East, Africa and South Asia region, MEASA, in the 168-year history of the event, have committed to ensuring all major shell and core construction work will be finished a year before gates open.

Expo 2020 Dubai will be a celebration for all, which, through its theme ‘Connecting Minds, Creating the Future’, will provide a platform to encourage creativity, innovation and collaboration. This is underpinned by Expo’s three pillars seen as key to tackling humanity’s challenges: Opportunity, Mobility and Sustainability.

Expo 2020 Dubai runs from 20 October, 2020, to April 10, 2021. More than 200 participants, including 190 nations, multilateral organisations, corporations and educational institutions, are expected to take part. Expo 2020 expects 25 million visits, with 70 percent of visitors to come from outside the UAE – the largest proportion in the 168-year history of World Expos.

Expo 2020 also has an ambitious volunteer programme, which aims to include more than 30,000 volunteers from a wide range of ages, nationalities, cultures and backgrounds.

Expo 2020 Dubai is the first World Expo to take place in the Middle East, Africa and South Asia, MEASA, region.