80 killed in Spain train crash; speeding said to be cause

The driver of a Spanish train was under investigation on Thursday after at least 80 people died when it derailed on a sharp bend and caught fire in a spectacular accident which an official source said was caused by excessive speed.

The eight-carriage high speed train came off the tracks just outside the pilgrimage centre of Santiago de Compostela in northwestern Spain on Wednesday night. It was one of Europe’s worst rail disasters.

The source had knowledge of the official investigation into a crash which brought misery to Santiago on Thursday, the day when it should have celebrated one of Europe's biggest Christian festivals. Authorities cancelled festivities as the city went into mourning.

Dramatic video footage from a security camera showed the train, with 247 people on board, hurtling into a concrete wall at the side of the track as carriages jack-knifed and the engine overturned.

One local official described the aftermath of the crash, on the eve of one of Europe's biggest Christian festivals, as like a scene from hell, with bodies strewn next to the tracks.

The impact was so huge one carriage flew several metres into the air and landed on the other side of the high concrete barrier.

There were 94 injured, 35 of those were in a serious condition, including four children, the deputy head of the regional government said on Thursday.

Spanish police officers walk next to derailed cars at the site of a train accident near the city of Santiago de Compostela early on July 25, 2013. AFP

"We heard a massive noise and we went down the tracks. I helped get a few injured and bodies out of the train. I went into one of the cars but I'd rather not tell you what I saw there," Ricardo Martinez, a 47-year old baker from Santiago deCompostela, told Reuters.

The train driver was under formal police investigation, a spokeswoman for Galicia's Supreme Court told Reuters, without naming him. The train had two drivers and one was in hospital, the Galicia government said.

It was not immediately clear which driver was under investigation or in hospital. The train, operated by state-owned company Renfe, was built by Bombardier and Talgo and was around five years old. It had almost the maximum number of passengers.

Newspaper accounts cited witnesses as saying one driver, Francisco Jose Garzon, who had helped rescue victims, shouted into a phone: "I've derailed! What do I do?".

The 52-year-old had been a train driver for 30 years, a Renfe spokeswoman said. Many newspapers published excerpts from his Facebook account where he was reported to have boasted of driving trains at high speed. The page was taken offline on Thursday and the reports could not be verified.

El Pais newspaper said one of the drivers told the railway station by radio after being trapped in his cabin that the train entered the bend at 190 kilometres per hour (120 mph). An official source said the speed limit on that stretch of twin track, laid in 2011, was 80 kph.

"We're only human! We're only human!" the driver told the station, the newspaper said, citing sources close to the investigation. "I hope there are no dead, because this will fall on my conscience."

Investigators were trying to urgently establish why the train was going so fast and why failsafe security devices to keep speed within permitted limits had not worked.

Spain's rail safety record is better than the European average, ranking 18th out of 27 countries in terms of railway deaths per kilometres travelled, the European Railway Agency said. There were 218 train accidents in Spain between 2008-2011,well below the European Union average of 426 for the same period, the agency said.

Cranes were still pulling out mangled debris on Thursday morning, 12 hours after the crash. Emergency workers had stopped their search for survivors, the court spokeswoman said.

Firefighters called off a strike to help with the disaster, while hospital staff, many operating on reduced salaries because of spending cuts in recession-hit Spain, worked overtime to tend the injured.

The disaster happened at 8.41 p.m. (1841 GMT) on the eve of a festival dedicated to St James, one of Jesus' 12 disciples, whose remains are said to rest in the city's centuries-old cathedral.

The apostle's shrine is the destination of the famous ElCamino de Santiago pilgrimage across the Pyrenees, which has been followed by Christians since the Middle Ages.

U.S. citizens were amongst the injured, the U.S. embassy said in a statement and at least one British citizen was wounded, the British embassy spokesman said. Several other nationalities were believed to be among the passengers.

One of the train drivers had been sedated, said Juan Jesus Garcia, the secretary general of the Renfe train drivers union, adding he hoped to visit him later on Thursday.

Neighbours ran to the site to help emergency workers tend to the wounded. Ana Taboada, a 29-year-old hospital worker, was one of the first on the scene.

Emergency personnel respond to the scene of a train derailment in Santiago de Compostela, Spain, on Wednesday, July 24, 2013. AP

"When the dust lifted I saw corpses. I didn't make it down to the track, because I was helping the passengers that were coming up the embankment," she told Reuters. "I saw a man trying to break a window with a stone to help those inside get out."

Prime Minister Mariano Rajoy, who was born in Santiago deCompostela, the capital of Galicia region, visited the site and the main hospital on Thursday. He declared three days of official national mourning for the victims of the disaster.

Passenger Ricardo Montesco told Cadena Ser radio station the train approached the curve at high speed, twisted and wagons piled up one on top of the other.

"A lot of people were squashed on the bottom. We tried to squeeze out of the bottom of the wagons to get out and we realised the train was burning. ... I was in the second wagon and there was fire. ... I saw corpses," he said.

Both Renfe and state-owned Adif, which is in charge of the tracks, had opened an investigation into the cause of the derailment, Renfe said.

The official source said no statement would be made regarding the cause until the black boxes of the train were examined.

Clinics in Santiago de Compostela were overwhelmed with people flocking to give blood, while hotels organised free rooms for relatives. Madrid sent forensic scientists and hospital staff to the scene on special flights.

The train was travelling from Madrid to Ferrol on the Galician coast when it derailed, Renfe said in a statement. It left Madrid on time and was travelling on schedule, a spokeswoman said.

Allianz Seguros, owned by Germany's Allianz, owns the insurance contract for loss suffered by Renfe passengers, a company spokeswoman told Reuters. The contract does not coverRenfe's trains. The company had sent experts to the scene, she said.

The disaster stirred memories of a train bombing in Madridin 2004, carried out by Islamist militants, that killed 191people, although officials do not suspect an attack this time.

Spain is struggling to emerge from a long-running recession marked by government-driven austerity to bring its deeply indebted finances into order.
But Adif, the state railways infrastructure company, told Reuters no budget cuts had been implemented on maintenance of the line, which connects La Coruna, Santiago de Compostela and Ourense and was inaugurated in 2011.

It said more than 100 million euros a year were being spent on track maintenance in Spain.

Wednesday's derailment was one of the worst rail accidents in Europe over the past 25 years. 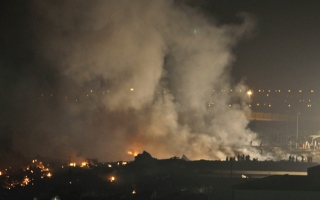 Top 8 most secure jobs today that are here to stay