Back to Dubai: Why reverse migration from Sharjah, Ajman

A growing focus of developers in the affordable segment coupled with government laws will lower movement of Dubai residents to neighbouring emirates, says a new report.

“We can witness from 2005 to 2009, the percentage of people living outside increased dramatically as rents close to tripled.

“However, as rental rates plunged in the wake of the global financial crisis, the population living outside began to shrink, as Dubai became more affordable,” Unitas Consultancy and Reidin.com said in a report titled: ‘Dubai: Growth and the Second City’.

In the subsequent market cycle, although rents spiraled upwards, the population living outside continued to taper.

The consultancy said that the reason for this continued decrease was an increase in affordable housing options.

Emirates 24|7 was the first to reveal in March 2015 that Dubai had allocated over 100 hectares of land for affordable housing, mostly to meet the demand for people earning between Dh3,000 and Dh10,000 per month.

“In just three areas — Muhaisnah 4, Al Qouz 3 and 4 — we allocated land in excess of 100 hectares for affordable housing and that will take up more than 50,000 people.

“We have many more areas where similar housing will come up,” Abdulla Mohammed Rafia, Assistant Director General for Engineering and Planning Sector, Dubai Municipality, had said.

A break-down of the structure of Dubai’s freehold supply in relation to rental rates in monitored areas revealed that only 36 per cent of the units are below the Dh70,000 annual rental mark, Unitas said.

Within that segment, the majority was skewed towards studios and one-bedrooms, making it not suitable for families.

The report suggested that developers will have to shift course by offering larger dwellings at reasonable rates in order to attract families.

An analysis of two-bedroom rental rates across freehold and lease-hold communities revealed the latter was better suited to accommodate the Dh70,000 level.

Furthermore, the Dubai Statistics Centre has said that close to 1.1 million reside outside Dubai, but commute into the city for work.
The higher rents in Dubai had caused people to find alternate housing options in other emirates, creating satellite cities. 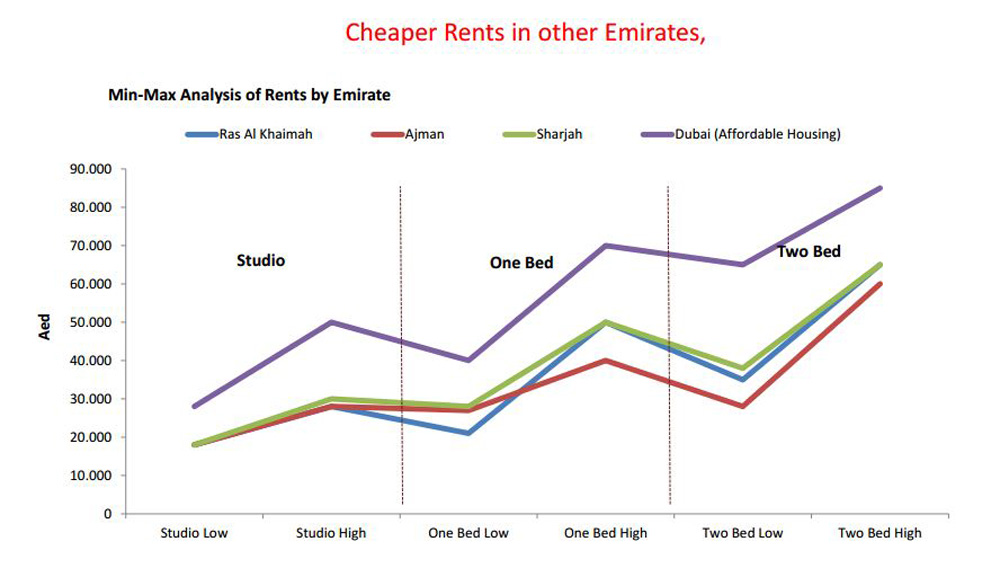 Sharjah, Ajman, and Ras Al Khaimah (RAK) have options that are 30-40 per cent cheaper compared to Dubai’s affordable housing.