As the pieces of the puzzle come together, workers on site finally have a clearer picture as to why a pipe burst that fateful Thursday night, sending hot flood waters into The Gardens neighbourhood that lead up to an explosive fire near the district cooling station.

But for residents of the relatively quiet community, the aftermath is nothing short of a war zone.

While some streets are littered with debris, others remain water-logged, with a few cars still abandoned mid-stream. 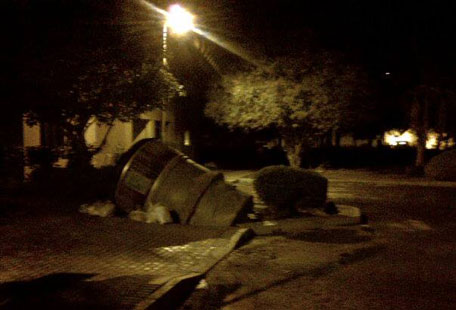 Debris still peppered across the community

However, worst off remained the inhabitants of buildings four to eight, who had the misfortune of being in absolute proximity of Ground Zero, the place where the water main burst in the first place, sending a hot geyser into the sky before the flood commenced. 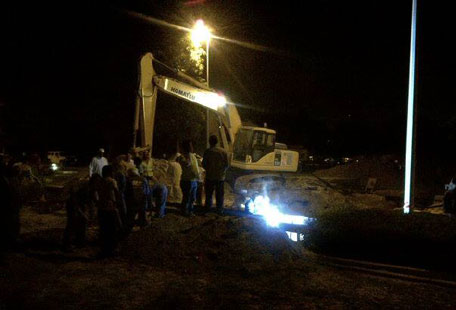 These residents remain without water, with a Dewa employee on site coordinating a tanker supplying them with this basic essential, as they battle a scorching summer and 15 hours of fasting in the midst of Ramadan.

A sea of pipes surrounds the gaping hole in the ground where contractors are working around the clock to replace the damaged main. 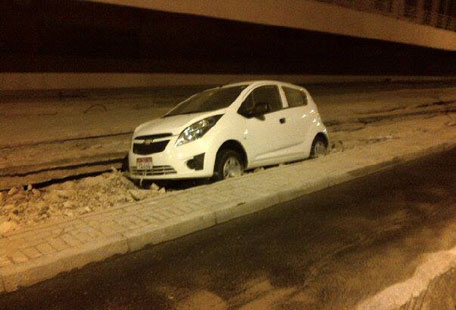 The smaller rim (on the ground) exploded first, resulting in the main pipe (foreground) following suit

“It was the intense heat that built up gas in the water main; it was the pressure that finally resulted in the explosion of the rim that seals the pipe,” he explained, on the condition of anonymity. “This also impacted 1,200mm pipe that’s attached to the rim, which exploded in a domino effect.”

Surely these pipes would be heat resistant?

He further explained: “They are, but because the main runs underground from Jebel Ali, the 50 degrees summer heat can play havoc; add to that is the fact that in these months, water is consumed on a smaller scale so the gas builds up in the relatively stagnant flow, almost like a pressure cooker.

“When cars move at high speeds on these roads, even a tiny wayward vibration is enough to set things in motion.

“And the flow cannot even be reduced because people will complain if they don’t have running water in their taps. What can we do?”

As the welding work continued, the site manager said the wayward pipe was now being replaced by another, which comes with a 100-year warranty.

He continued: “Unfortunately, these weren’t available when the groundwork was first laid. So while this will be replaced, the remaining areas will continue on with the old grid for now.”

“No, there’s no guarantee that others may not set off in future.”

A panoramic view from Ground Zero paints a ragged site, with the neighbouring pavement having sunk into the ground, in pieces, while a lone Chevrolet Aveo has somehow managed to fall into the gaping cleft.

Building six’s Al Madina Supermarket had a relatively empty shelf in the space for half litre water bottles, while nearly every weary resident in the 10 minutes this reporter stood there, was exiting with five-litre water bottles cradled in each arm.

Running water still remains a mystery for most of these building dwellers as the water pain undergoes repairs; the DEWA worker explained that a tanker is bringing in supplies through the day in these poor refuge-like conditions.

He urged residents to call and complain; help will be at hand.

But workers in nearby shops are exhausted, some unable to go home for 24-hours until the roads were passable.

The neighbouring mosque had fewer attendants for the main Friday sermon due to this.

An elderly Pakistani couple, who are visiting their son during this holy month, were saddened by this turn of events.

“It’s the holy month of Ramadan and we were unable to reach the mosque for the Friday Fajr prayers,” said Mr Khan. “Bless our son though; he found us a way to head to reach another mosque in Jebel Ali for the afternoon prayer. We couldn’t have missed that.”

The couple continued with their evening walk behind Ibn Battuta Mall, only to halt in their tracks as a car came barrelling down the pavement in bid to reach the neighbouring complex, which had become impassable with barricades lining up the roads, while others remained water-logged and cut off.

Other cars followed suit, even as two Honda City vehicles were entrenched in the soft sand and had to be towed out by passers-by.

The traffic chaos continued well into the night, with no authority members on hand to direct drivers or erect signboards for alternate routes.

Even at midnight, the relatively quiet suburban community faced traffic snarls, with cars stretching for kilometres amidst this melee.

Access point at Exit 27 from Sheikh Zayed Road remained closed Friday night, with one frustrated driver stating on a social media site: “Driving from Dubai, the first exit after Marina was closed by police and everyone was queuing (very badly) at the next junction.

“I suggest you go to the next junction and come back as if you were driving back from Dubai and take the exit after Jebel Ali Gardens back into Ibn Battuta.

“Park at Geant up to the midway point only, as the rest of the parking towards the cinema side are still flooded.

“When leaving, do not exit by the road that leads you to the Discovery Gardens side, it is closed and cars were doing three-point turns and reversing back in chaos. We had to drive through high flooding (some minor damage to the front of the car) and then back the wrong way in the opposite directions to traffic and into some no entry signs to drive through the car park back towards Geant side.”

The stories were the same: a Korean couple were lost trying to reach a friend’s home; a weary traveller returned from a flight, only to find out access to his home had been cut off; a third simply wanted to take his car back home after having abandoned it beyond the flood waters on Thursday night.

Meanwhile, those seeking refuge in Ibn Battuta Mall were in for a shock as most of the toilets were closed without running water.

A worker with developer Nakheel, overseeing the drainage of the flooded areas, appeared confident that by Saturday evening, the streets should return to normal.

Indian worker Suman, said: “There are 15 pumps such as this, which is directing the water out of the sewage and onto the streets, where tankers lay in wait to drain the neighbourhoods out. The rescue operation has been non-stop, and we are confident it will happen by Saturday evening.

“The Dubai Police has been very active in rescuing stranded people, who had climbed trees and the roofs of their cars when the boiling water sent them in search for higher ground.

“Their cars are also being pulled out by towing vans.”

The clean-up drive is another story entirely, with muddy residue, fallen plants and tipped over trash cans painting a grim picture.

However, the workers said all authorities are united in this mission, with even Dubai Municipality helpers at hand to return the neighbourhood to its normal state.

“It will happen; everyone just needs to be patient,” said the DEWA site manager.