His Highness Sheikh Mohammed bin Rashid Al Maktoum, Vice-President and Prime Minister of the UAE and Ruler of Dubai, attended the opening session of the Arab Media Forum (AMF) held under his patronage at Grand Hyatt Hotel in Dubai on Tuesday.

In her opening speech of the 12th Arab Media Forum, Director General of the Government of Dubai Media Office (DGMO) and Chairperson of AMF Organising Committee, Mona Ghanim Al Marri welcomed Sheikh Mohammed and the participants in the Forum which will last for two days and will be concluded with the distribution of Sheikh Mohammed bin Rashid Al Maktoum Arab Journalism Awards.

She described the forum as a renewable event bringing together elite of thought symbols and media leaders.

She added that the event explores the strengths, weaknesses, opportunities and threats of the Arab media.

Al Marri stressed that AMF, since its launch 12 years ago, has retained a clear approach throughout its journey, hoping to reach the best possible formula in dealing with the reality of our media in an effective manner that guarantees its evolution.

Al Marri noted that this year’s edition of AMF is characterised by depth and comprehensiveness and focuses on various phenomena to discuss their background and assess their impact on the media profession as well as its ability to achieve its goals and mission.

Addressing the audience, Grand Imam of Al Azhar Al Sharif, Dr. Sheikh Ahmed Al Tayyib said that the word is a mixed-blessing weapon in terms of building or ruining societies. He warned of the dangers of the word in light of the knowledge and digital revolution and telecommunications, urging media people to do their best to bring back life to the Arabic language. He also urged them to repair the image of Islam and Arabs amidst the stereotyped besmirching of this image by people of religion in the West despite the international agreement combating defamation of sanctuaries, religious symbols and places of worship.

Closing his speech, Dr Al Tayyib called on exercising the freedom of speech and expression regarding any thought, opinion and innovation, pushing, at the same time, for the need to taking into consideration the Arabic and Islamic traditions and culture.

Arab League Secretary General Dr. Nabil Al Araby thanked in his speech, Sheikh Mohammed and the organisers of the forum for inviting him to take part in the forum, which he described as a valuable Arab event which plays a pivotal role in enhancing the standing of Arabic media at this particular stage of enormous challenges and variables in the Arab World.

Al Araby thanked the Dubai Press Club for their distinguished achievements year after year in supporting the profession of journalism and the struggle to devote freedom and professionalism in the Arab media community. He touched on other various issues including the Arab Spring and the Palestinian issues and the media impact on these issues.

After Al Araby’s speech, Sheikh Mohammed left the forum’s venue surrounded by media persons who greeted him and thanked him for his honouring standing of media. They also congratulated him on the UAE’s hosting of this renewable forum.

Sheikh Mohammed greeted media people and welcomed them in their second home, the UAE, wishing them success in their discussions, and stressing his support for any decisions and recommendations they may reach regarding the Arab nation’s issues and media.

He praised the efforts and perseverance of AMF Organising Committee, chaired by Mona Ghanem Al Marri and her assistants in the Dubai Press Club and those in the Government of Dubai Media Office who are making commendable efforts to reunite Arab journalists here in the UAE and in the city of life, dreams and pleasure.

His Highness Sheikh Mohammed bin Rashid Al Maktoum, Vice-President and Prime Minister of the UAE and Ruler of Dubai received Dr Sheikh Ahmad Mohammed Al Tayeb, the Grand Imam of the Al Azhar, on the sideline of the Arab Media Forum (AMF) at Grand Hyatt Hotel in Dubai today.

During the meeting, which saw the attendance of Dubai Deputy Ruler Sheikh Maktoum bin Mohammed bin Rashid Al Maktoum, Sheikh Mohammed and Dr Al Tayeb discussed several Arab media-related issues and means by which media can be utilised to serve in repairing the image of Islam in the foreign media, especially rooting out Islamic extremism when dealing with the ‘other’ and stopping using “Islam” as a mean for expressing our political, social and religious oppositions.

Sheikh Mohammed lauded Al Azhar’s moderate role related to Islam and Muslim’s issues, stressing that extremism and violence are not part of the characteristics and principles Islam which adopts methods of moderation, tolerance and coexistence among all religions, sects and understanding the other. 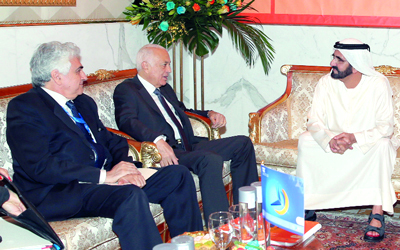 During the meeting, which was held at Grand Hyatt Hotel in Dubai, Al Araby briefed Sheikh Mohammed about the latest developments in the peace process between the Palestinians and the Israelis in the light of the talks held by the delegation of the Arab Follow-up Committee in Washington with US Secretary of State John Kerry concerning the Arab peace initiative.

Talks also touched on the international efforts to resolve the Syrian issue and bring to a halt the killings and destruction in Syria.

In this regard, Sheikh Mohammed reiterated that the UAE is against all forms of violence and killing, considering that the priority in the Syrian crisis is to stop the bloodshed and to resort to dialogue.

They exchanged views about current Arab issues in the light of the political variables in the Arab World as well as the positive and negative consequences of the Arab Spring, especially in terms of internal stability in societies that have experienced this development.

The discussion also dealt with Sheikh Mohammed’s book ‘Flashes of Inspiration’. The interlocutors concurred in the significance of the book for the Arab leaders in general and the young leaders in particular as it lights the road for them in the field of government and non-government management.

Sheikh Mohammed expressed pride at the opinions he heard and received pertaining to his book which records his experiences and expertise since his graduation from the Saint Herst Military College in London.

He added that the two leaders had lived all forms of challenges and were able to overcome all financial, social, economic and other hurdles thanks to their perseverance and wisdom.

He went on to say that through his travels with the late Sheikh Zayed and Sheikh Rashid he honed his experience and expertise in life that helped him to proudly serve his people.