The People of Determination Retreat, which came as part of the nationwide efforts made to mobilise resources in support of this significant segment of society, outlined eight main tenets: Sports, Quality of Life, Education & Labour, International Representation, Health, Culture, Services, and Media.

A number of Sheikhs, ministers, national figures and a number of People of Determination, and social specialists participated in the sessions.

His Highness Sheikh Mohamed bin Zayed commended the efforts made by the government under the leadership of H.H. Sheikh Mohammed bin Rashid, to ensure the integration of the People of Determination through a series of national programmes and initiatives.

"This retreat carries a humanitarian message of sublime meanings with regards to Corporate Social Responsibility from the UAE to the entire world," Sheikh Mohamed added.

At the end of the retreat, a total 31 initiatives and national programmes have been approved to support the future of this segment of society and ensure their integration across various sectors.

H.H. Sheikh Mohammed bin Rashid said," We have declared 31 initiatives as part of our national responsibility toward mobilising efforts and maximising energies for the sake of the People of Determination. We are committed to delivering their future and providing them with all available opportunities." 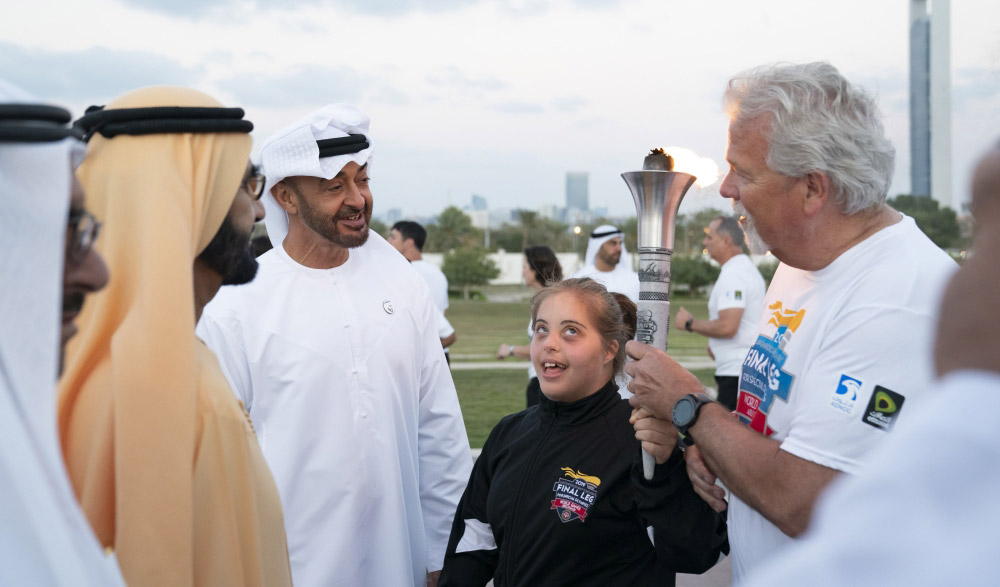 He affirmed that hosting the Special Olympics reflects the trust placed by the entire world in the UAE, being a forward-thinking and multicultural centre of tolerance, faith and inclusion as well as a favoured destination for sportsmen and creative people.

On Quality of Life, the Retreat called for ensuring the empowerment and protection of the People of Determination's families and enabling them to attend key national activities among VIPs, approving an initiative to coordinate with a university to endorse a training programme for sign language translators.

The Education & Labour Tenet is focused on integrating the People of Determination in public and private education, starting from kindergarten up to higher education. It adopts a legislation supporting SMEs, including the issuance of entrepreneurship licenses, banking finances, and cancellation of government fees with the ultimate goal of encouraging the integration of People of Determination in the private sector.

The International Representation Tenet is aimed at facilitating the participation of the People of Determination in international gatherings. The Health Tenet ensures the provision of best health services to meet their needs while working on a comprehensive health-oriented legislation covering the needs of People of Determination of all ages in addition to establishing a national diagnosis cetnre providing quality medical services.

At the cultural level, the retreat called for developing a policy that ensures their participation at the same footing with all other segments of society in all cultural events organised in the country.