Officials in Colombia's second-largest city on Monday inaugurated a giant, outdoor escalator for residents of one of its poorest neighborhoods.

For generations, the 12,000 residents of Medellin's tough Comuna 13, which clings to the side of a steep hillside, have had to climb hundreds of large steps authorities say is the same as going up a 28-story building.

Now they can ride an escalator Medellin's mayor says is the first massive, outdoor public escalator for use by residents of a poor area.

"It turned out very well," said Mayor Alonso Salazar, adding that he has not heard of any such project elsewhere in this world.

Salazar said officials from Rio de Janeiro plan to visit Medellin to see if such an escalator would work in that city's favelas, which also cling precariously to hillsides.

Comuna 13 residents came out to celebrate and study the $6.7 million escalator which officials say will shorten the 35-minute hike on foot up the hillside to six minutes. Use of the escalator is free.

Cesar Hernandez, head of projects for Medellin, said the electric stairway is divided into six sections and has a length of 384 metres (1,260 feet). An escalator goes up and a second goes down. Authorities plan to build a covering for inclement whether.

Salazar described Comuna 13 as the city's district that has "suffered the greatest urban violence... but lately this has been receding and we hope this social package will help it move forward." 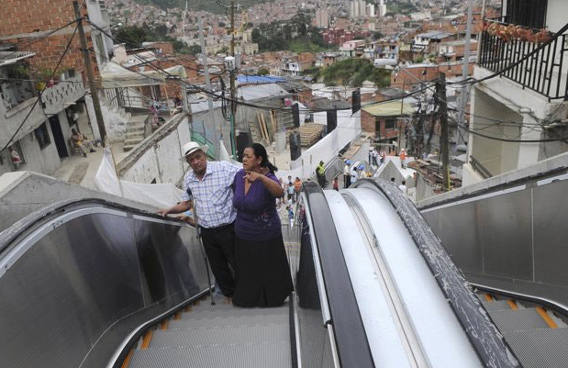