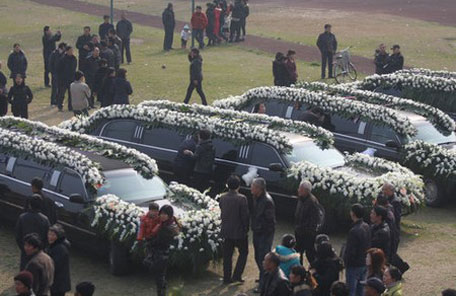 CHINA - A Chinese businessman threw a lavish funeral for his mother that cost close to S$1 million.

The funeral procession included a fleet of eight stretched Lincoln limousines and other luxury cars for transporting family members.

There was also a large marching band of more than 600 musicians, and a row of 16 gold-painted cannons which fired a salute as the coffin passed.

Reports said that 600 monks carried out the funeral rites, and monks had to be recruited from neighbouring provinces because there were not enough monks in the province where the funeral was held.

Mourners and other onlookers who were not able to get close to the funeral procession were able to watch the event unfold live on screens on either side of a stage.

It is reported that 10,000 onlookers crowded around the area, causing a huge traffic jam.

It was used in a pioneering operation after twin Hannah was born at only 28 weeks, weighing just 2lbs 4oz and suffering from a rare heart condition, reports The Sun.

Doctors warned Charlotte and husband David that Hannah was likely to die.

Yesterday Charlotte, 38, said: "It really is incredible to think a cow's vein has been used to keep our daughter alive."

The pregnancy had seemed to be going fine until a scan at 20 weeks picked up a problem with Hannah.

Hospital tests revealed truncus arteriosus - where a blood vessel does not develop properly.

Instead of it dividing into two as it leaves the left and right sides of the heart, there was just a single large one, sending too much blood to the lungs. Charlotte told the daily: "It was devastating news to hear."

As soon as she and identical twin Lauren were born in September, Hannah had tiny bands clipped round her arteries to slow the flow of blood.

Three months later, when she was deemed strong enough for a second operation, the section of a cow's jugular vein was used to reconstruct a pulmonary artery, the paper said.

Now five-month-old Hannah, who became the youngest baby in the UK to have the operation, is finally set to go home.

JAPAN: It sounds just too good to be true – the prospect of cakes and chocolate bars that help you burn off calories.

But manufacturers claim to have discovered an ingredient derived from chilli peppers that could be added to any pudding or treat to make the red hot idea a reality.

This ‘miracle’ extract – known as dihydrocapsiate (DHC) – speeds up the body’s metabolism, helping it use up more calories, reports Daily Mail.

It is already sold in the form of diet supplement pills in the US and Japan, but it could be about to be used as a food additive in Britain.

The ingredient, which is tasteless, is one of several chemical compounds known as capsinoids found in a particular variety of chilli, the paper says.

Now a Japanese food firm has submitted plans to the Food Standards Agency watchdog with the aim of adding it to chocolate bars, desserts and ready meals targeted towards slimmers.

The FSA has recently declared the extract safe.

CALIFORNIA: A surgeon specializing in regenerative medicine on Thursday "printed" a real kidney using a machine that eliminates the need for donors when it comes to organ transplants.

"It's like baking a cake," Anthony Atala of the Wake Forest Institute of Regenerative Medicine said as he cooked up a fresh kidney on stage at a TED Conference in the California city of Long Beach.

Scanners are used to take a 3-D image of a kidney that needs replacing, then a tissue sample about half the size of postage stamp is used to seed the computerized process, Atala explained.

The organ "printer" then works layer-by-layer to build a replacement kidney replicating the patient's tissue.

College student Luke Massella was among the first people to receive a printed kidney during experimental research a decade ago when he was just 10 years old.

He said he was born with Spina Bifida and his kidneys were not working.

"Now, I'm in college and basically trying to live life like a normal kid," said Massella, who was reunited with Atala at TED.

"This surgery saved my life and made me who I am today."

About 90 per cent of people waiting for transplants are in need of kidneys, and the need far outweighs the supply of donated organs, according to Atala.

"There is a major health crisis today in terms of the shortage of organs," Atala said. "Medicine has done a much better job of making us live longer, and as we age our organs don't last."

BRITAIN: Britain was last night poised to become the first European country to force all cigarettes to be sold in plain packs - with no logos or graphics.

Distinctive colours on packets will be banned under a crackdown expected to be announced this week.

All that will remain is the name of the brand - and the health warning.

The aim is to make fags less alluring to the estimated 200,000 teens who take up smoking each year.

The Tobacco Manufacturers' Association blasted the idea as a boon to makers of counterfeit cigarettes.

Worms in space 'living in asteroids'

US: We are not alone and alien life forms may have more in common with life on Earth than we had thought, according to a NASA scientist.

The out-of-this-world research by Dr Richard B. Hoover, an astrobiologist with NASA's Marshall Space Flight Centre, was published in the March edition of the Journal of Cosmology.

In the report, Dr Hoover describes the latest findings in his study of an extremely rare class of meteorites, called CI1 carbonaceous chondrites - only nine such meteorites were known to exist on Earth.

The scientist was convinced that his findings revealed fossil evidence of bacterial life within such meteorites and by extension, suggests we are not alone in the universe.

"I interpret it as indicating that life is more broadly distributed than restricted strictly to the planet Earth," Dr Hoover said.

"This field of study has just barely been touched because quite frankly, a great many scientists would say that this is impossible."

In what he called "a very simple process," Dr Hoover fractured the meteorite stones under a sterile environment before examining the freshly broken surface with the standard tools of the scientist: a scanning electron microscope and a field emission electron scanning microscope, which allowed him to search the stone's surface for evidence of fossil remains.

He found the fossil remains of micro-organisms not so different from ordinary ones found underfoot on Earth.

"The exciting thing is that they are in many cases recognisable and can be associated very closely with the generic species here on earth," Dr Hoover said.

JAPAN - A preparatory school student arrested over the posting of university entrance exam questions on an Internet bulletin board has told police that he hid a cell phone under his desk and operated it with his left hand during the tests, investigative sources said Friday.

The 19-year-old student allegedly posted all the questions in mathematics from his seat in Kyoto University's exam room onto Yahoo Japan Chiebukuro (pearls of wisdom), a question-and-answer site. He did so apparently because he was weak in the subject and had failed to achieve good marks in preliminary entrance exams administered by the government, the sources said.

Kyoto prefectural police arrested the youth Thursday on suspicion of obstructing the university's operations by fraudulent means. According to the police, he probably registered mathematical signs in his cell phone's dictionary in advance, as he was able to quickly post the questions with such signs soon after the test started.

During the Kyoto University math exam, the student posted all seven questions on the Internet over six occasions. The first question appeared seven minutes after the test began, with the others coming at intervals of five to 11 minutes.

It took the student 40 minutes to post all seven, the sources said.

The questions contained diagrams and simultaneous inequalities and used many mathematical signs, including square root, greater-than, logarithms and absolute values. Although these signs are rarely used in daily life, the youth was able to post them correctly on the bulletin board.