In a bizarre case of cannibalism, an engineering student is accused of dismembering his roommate with a knife and eating his brain and heart.

According to a 'Daily Mail' report, 21-year-old Alexander Kinyua of Maryland, confessd to police that he ate his roommate's heart and portions of his brain after killing him.

Police found the victim's head and hands in metal tins. He then led cops to the remainder of body parts.

Police were alerted by Kinyua's father when his other son told him that he found somethng akin to a human head at home.

His facebook page shows a troubled student who claims that campus killings are actually 'ethnic cleansing'.

He is charged with firt-degree murder.

The dingy corridors and gloomy wards of a long-abandoned Saudi Arabian hospital have drawn hundreds of amateur ghost hunters who believe it to be haunted by jinn.

The macabre fascination with Riyadh's Irqa Hospital, which treated Gulf War combatants in 1991, began with tweeted rumors and escalated to the point where hundreds of youths broke into the grounds, smashing windows and starting fires.

"Teenagers sent text messages calling for an operation against some of the jinn who live in the hospital, and they broke into the hospital and smashed its facilities and burned 60 percent of it," Okaz newspaper reported last week.

The rampage prompted angry press complaints the authorities were allowing the building to fall into disrepair.

Several films have since been posted on YouTube showing grinning young men exploring the building's deserted rooms in search of evidence of spectral activity.

One showed blazing palm trees that had been torched by the ghost hunters.

Jinn fever reached the point where the Health Ministry issued a terse statement on Monday disclaiming responsibility for the decaying building, which it said was privately owned and too decrepit to be revived as a working hospital.

A columnist in the English-language Saudi Gazette daily on Tuesday recommended that authorities form "a committee for the jinn" to help the owners of possessed houses.

"It would be no understatement to say we are sick and tired of evil sorcerers," said the article.

Even police shocked by gore in face-mauling attack 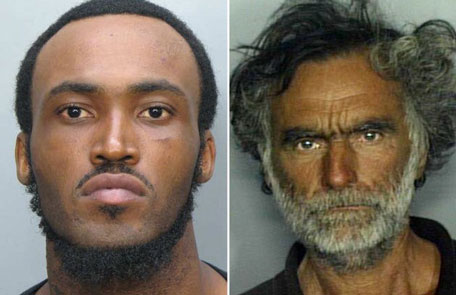 It is being called one of this city's goriest crimes: A naked man was on top of another nude man along a busy highway, biting into the man's face, tearing it to pieces. A police officer arrived to help, but the mauler growled at him and continued to chew away, stopping only when he was shot to death.

Miami police said little Tuesday about the attack, which took place Saturday afternoon in the shadow of The Miami Herald headquarters. Surveillance video from the newspaper's security camera showed cars, motorcycles, pedestrians and bicyclists passing by.

The victim, identified as 65-year-old Ronald Poppo, a homeless man who lived under the causeway, was in critical condition.

"He had his face eaten down to his goatee. The forehead was just bone. No nose, no mouth," said Sgt. Armando Aguilar, president of the Miami Fraternal Order of Police. "In my opinion, he just happened to be in the wrong place at the wrong time."

Sgt. Javier Ortiz, vice president of the Miami Fraternal Order of Police, said it was one of the bloodiest "and goriest scenes I've ever been to."

"It was not only grotesque, it was just very sad, the amount of blood. It was very sad to see what happened to this gentleman that had his face eaten," Ortiz said.

"I wouldn't say he had mental problem but he always felt like people was against him ... No one was for him, everyone was against him," she told the station. She and Eugene's mother declined comment when reached by The Associated Press.

Larry Vega was riding his bicycle off the causeway, which connects downtown Miami with Miami Beach, when he saw the attack.

"The guy was, like, tearing him to pieces with his mouth, so I told him, 'Get off!'" Vega told Miami television station WSVN (http://bit.ly/L6kwWt). "The guy just kept eating the other guy away, like, ripping his skin."

Vega flagged down the Miami police officer, who can be seen exiting his car on the Herald video. Vega said the officer repeatedly ordered the attacker to get off. Eugene just picked his head up and growled at the officer before continuing to maul his victim, Vega said.

Vega refused to comment when reached by The Associated Press, saying he wanted to put what he witnessed behind him.

Detective William Moreno would not release details about the shooting, citing the ongoing investigation. The Miami-Dade County medical examiner declined to provide any information until after the autopsy, which was scheduled for Tuesday. Police have not released details from the autopsy and it could be weeks before the results of toxicology tests are available.

Ortiz said the officer, who is part of a crisis intervention team and trained to deal with the mentally ill, had no choice but to fire.

"He's clearly shaken up," Ortiz said, adding that the officer had been administratively reassigned pending an investigation, as is standard after an officer-involved shooting.

After the shooting, the Herald's video zooms in on the scene. Most of it is blocked by an overpass, but two sets of uncovered legs can be seen. One set never moves, while the other twists and turns as if the person is in pain.

"It was just a blob of blood," Vega said. "You couldn't really see, it was just blood all over the place."

According to Miami-Dade court records, Eugene had been arrested for multiple misdemeanors, mostly marijuana-related charges. The most recent arrest was in 2009. The Herald reported that he played football at a Miami area high school in the late 1990s.

Ives Eugene, who identified himself as Rudy Eugene's uncle, described his nephew as a "nice and hard-working" man who washed cars at a local dealership.

He said his nephew had asked his girlfriend to borrow her car, but she said no. "So he rode the bicycle, and he never came back home," he said. 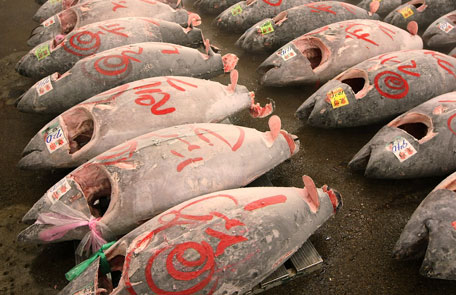 Across the vast Pacific, the mighty bluefin tuna carried radioactive contamination that leaked from Japan's crippled nuclear plant to the shores of the United States 6,000 miles away - the first time a huge migrating fish has been shown to carry radioactivity such a distance.

"We were frankly kind of startled," said Nicholas Fisher, one of the researchers reporting the findings online Monday in the Proceedings of the National Academy of Sciences.

The levels of radioactive cesium were 10 times higher than the amount measured in tuna off the California coast in previous years. But even so, that's still far below safe-to-eat limits set by the U.S. and Japanese governments.

Previously, smaller fish and plankton were found with elevated levels of radiation in Japanese waters after a magnitude-9 earthquake in March 2011 triggered a tsunami that badly damaged the Fukushima Dai-ichi reactors.

But scientists did not expect the nuclear fallout to linger in huge fish that sail the world because such fish can metabolize and shed radioactive substances.

One of the largest and speediest fish, Pacific bluefin tuna can grow to 10 feet and weigh more than 1,000 pounds. They spawn off the Japan coast and swim east at breakneck speed to school in waters off California and the tip of Baja California, Mexico.

Five months after the Fukushima disaster, Fisher of Stony Brook University in New York and a team decided to test Pacific bluefin that were caught off the coast of San Diego. To their surprise, tissue samples from all 15 tuna captured contained levels of two radioactive substances - ceisum-134 and cesium-137 - that were higher than in previous catches.

To rule out the possibility that the radiation was carried by ocean currents or deposited in the sea through the atmosphere, the team also analyzed yellowfin tuna, found in the eastern Pacific, and bluefin that migrated to Southern California before the nuclear crisis. They found no trace of cesium-134 and only background levels of cesium-137 left over from nuclear weapons testing in the 1960s.

The results "are unequivocal. Fukushima was the source," said Ken Buesseler of the Woods Hole Oceanographic Institution, who had no role in the research.

Bluefin tuna absorbed radioactive cesium from swimming in contaminated waters and feeding on contaminated prey such as krill and squid, the scientists said. As the predators made the journey east, they shed some of the radiation through metabolism and as they grew larger. Even so, they weren't able to completely flush out all the contamination from their system.

"That's a big ocean. To swim across it and still retain these radionuclides is pretty amazing," Fisher said.

Pacific bluefin tuna are prized in Japan where a thin slice of the tender red meat prepared as sushi can fetch $24 per piece at top Tokyo restaurants. Japanese consume 80 percent of the world's Pacific and Atlantic bluefin tuna.

The real test of how radioactivity affects tuna populations comes this summer when researchers planned to repeat the study with a larger number of samples. Bluefin tuna that journeyed last year were exposed to radiation for about a month. The upcoming travelers have been swimming in radioactive waters for a longer period. How this will affect concentrations of contamination remains to be seen.

Now that scientists know that bluefin tuna can transport radiation, they also want to track the movements of other migratory species including sea turtles, sharks and seabirds.

Sentenced to death for singing at wedding 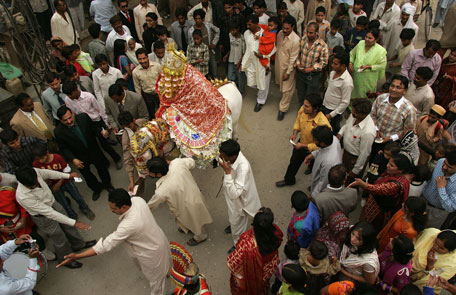 Four women and two men have been sentenced to death in northern Pakistan for singing and dancing at a wedding, police say.

Clerics issued a decree after a mobile phone video emerged of the six enjoying themselves in a remote village in the mountainous district of Kohistan, 176km north of the capital Islamabad.

Pakistani authorities in the area said local clerics had ordered the punishment over allegations that the men and women danced and sang together in Gada village, in defiance of strict tribal customs that separate men and women at weddings.

"It was decided that the men will be killed first, but they ran away so the women are safe for the moment. I have sent a team to capture them and am waiting to hear some news," he said, adding that the women had been confined to their homes.

Afridi said the events stemmed from a dispute between two tribes and that there was no evidence the men and women had been mingling.

"All of them were shown separately in the video. I've seen the video taken on a cell phone myself. It shows four women singing and a man dancing in separate scenes and then another man sitting in a separate shot," he said.

"This is tribal enmity. The video has been engineered to defame the tribe," he added.

The Human Rights Commission of Pakistan said at least 943 women and girls were murdered last year for allegedly defaming their family's honour.

The statistics highlight the scale of violence suffered by many women in conservative Muslim Pakistan, where they are frequently treated as second-class citizens.