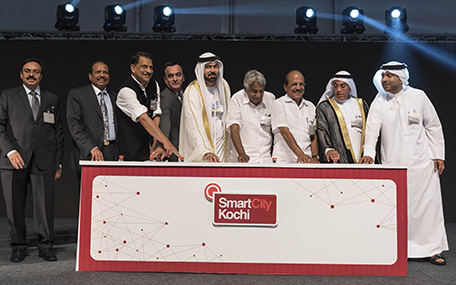 The pressing of a buzzer marked the joint inauguration of the first phase of SmartCity by Gergawi along with Kerala Chief Minister Oommen Chandy; India’s Union Minister for Skill Development Rajiv Pratap Rudy; India’s Minister for Industries and IT and Chairman, SmartCity Kochi, P K Kunhalikutty; and UAE-based Indian businessman M.A. Yusuf Ali, among others.

SmartCity Kochi is an initiative by Dubai-based Tecom, in association with the Government of Kerala.

When fully complete, the project, will comprise of 8.8 million sq ft of built up space, out of which at least 6.21 million sqft will be specifically for IT/ITES/allied services.

The launch of the 4.7m sqft phase 2 was also held simultaneously at the same function.