Capital appreciation has been one of the prime reasons for global investors to buy property in Dubai and now a report from an international real estate consultancy ratifies their decision.

Since early this year, experts have predicted prices to soften, experiencing a decline of 5 to 10 per cent.  Rents have, however, remained high, offering a rental yield of between seven to eight per cent.

The report said prime home prices fell by 4.5 per cent the second quarter 2015, but the decline was smaller compared to the mainstream segment’s 12.2 per cent fall.

“Also, the new residential supply pipeline for the prime segment is not significant, suggesting that prices over the next 12-18 months should maintain a greater degree of resilience,” it added.

Oversupply fears have been quashed by developers in the emirate, with HSBC Global Research also stating earlier that Dubai may see supply of 90,000 new units by 2018, but the market will absorb fairly easily all the supply even if the population grows less than five per cent per year.

The report emphasised that Dubai remains one of the safest locations in the world, with excellent connectivity, strong economic prospects, a low tax regime and a stable political system – combined, these factors will undoubtedly play an important role in paving the way for its success as a global hub. 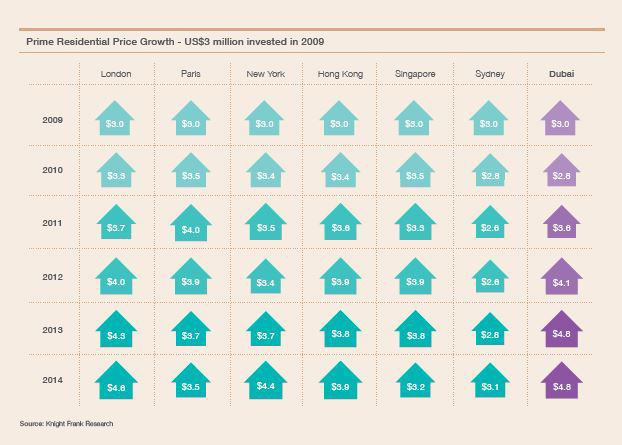 “Admittedly, the sector has faced some headwinds over the past 12-18 months, however, the wealthy continue to be attracted to Dubai due to the fact that it remains one of the safest locations in the world, with excellent connectivity, strong economic prospects, a low tax regime, and strong lifestyle factors,” Khawar Khan, Research Manager at Knight Frank Middle East, in a press statement.

Moody’s Investors Service, a global ratings agency, has said that government spending on infrastructure and encouraging foreign investments in various sectors will support the real estate market over the next five years.

Knight Frank further adds that as per the forecast from the International Monetary Fund the UAE’s economy will outperform the likes of the UK, US, Germany, Hong Kong and Singapore over 2015-2020. This, alongside the fact that the federation is among the easiest places to do business globally, should help to extend Dubai’s lead as a financial and business services hub in the Middle East. 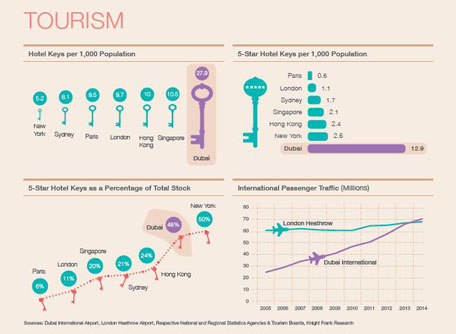 “All else equal, this suggests that tenant demand for good quality, Grade A office space will remain healthy in the short to medium-term,” it added.

As to the industrial property sector, the consultancy said strong growth over the past decade in manufacturing and exports have been important drivers of demand for logistics facilities in and around Dubai.

A number of reasons have supported this, including the excellent quality of the UAE’s transport infrastructure and the emirate’s strategic location between Europe, Africa and the Far East, The Hub Report said.

Dubai continues to make strides as a tourist destination and an air travel hub with visitors to the emirate staying longer to enjoy the city’s attractions, with the average length of stay rising from 2.6 nights in 2004 to 3.8 nights in 2014. 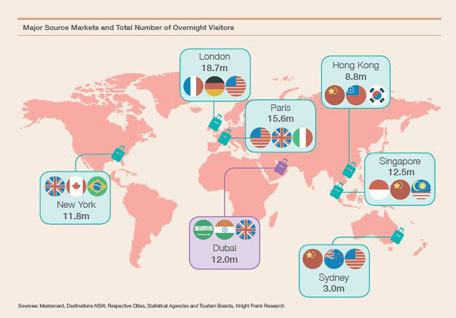 James Lewis, Head of Knight Frank Middle East, added: ‘‘Unsurprisingly the impact on real estate has been positive, with higher levels of occupier demand being generated across the office, industrial and hospitality sectors, respectively.

“Moreover the emirate has established itself as a safe, family-friendly and low tax environment – which combined with its connectivity to other global centres – has been attracting the world’s growing population of high-net-worth individuals. Naturally then, demand for luxury residential property has been gathering momentum.”