Andy Murray's 10-month-old daughter Edie smashed him in the face and gave him a nose bleed during playtime. 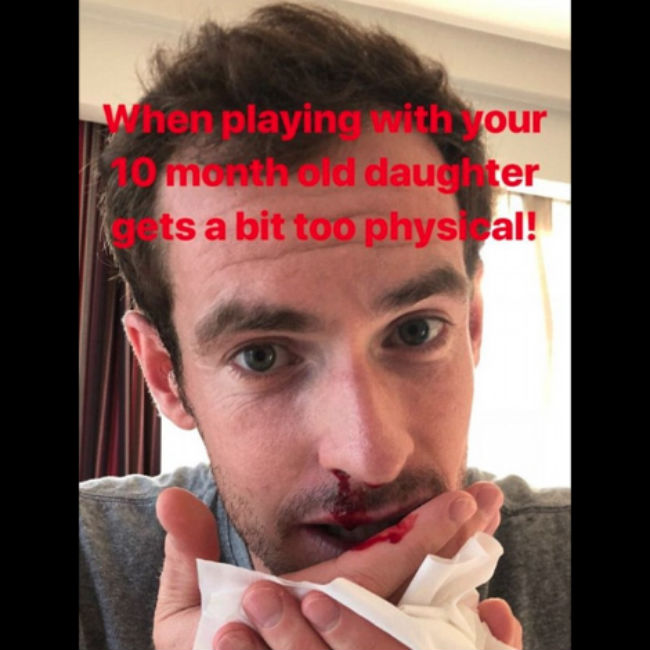 The 31-year-old professional tennis player was left with a swollen and bloodied snout on Tuesday night after playtime with his 10-month-old daughter Edie, whom he has with his wife Kim Sears, turned "a bit too physical."

Taking to his Instagram Stories, the sportsman uploaded a photograph of his blood-soaked tissue and fragile nose and captioned it: "When playing with your 10 month old daughter gets a bit too physical."

Andy's unfortunate injury comes just hours before his match against Fernando Verdasco in the second round of the US Open after he beat James Duckworth earlier this week.

While Andy - who also has two-year-old daughter Sophia with Kim - is thinking about his tennis, his mother Judy Murray is on the hunt for an actress to play her in a biopic.

When asked who she'd want to play her if a blockbuster was made about her life, she said recently: "For TV I'd go for Hermione Norris. I quite often get mistaken for her when I'm out in the street and she's fantastic in 'Cold Feet'. She is fantastic. And I think for Hollywood it has to be Jamie Lee Curtis."

However, Judy, 58, would never want to play herself on screen because she gets really nervous in front of the cameras - even though she did 'Strictly Come Dancing' in 2014.

She said: "I watched little bits of it. I watched the launch show [of 'Strictly Come Dancing'] to see who they all got paired up with and you remember the terror of that first night of actually standing there when the music comes on and I'm thinking 'Oh s**t, I'm going to have to do it now.' And then suddenly you've got to perform in front of loads of people doing something that you're totally unsuited for. As you could see."

And that's not the only thing she's scared of as she hates the dentist.