Aretha Franklin's family to host public viewing before her funeral

Aretha Franklin's fans will be able to visit the late star during two public viewings before her funeral at the end of this month.

The Queen of Soul tragically passed away on Thursday at the age of 76, and before she is laid to rest at the end of this month, the beloved singer's devoted fans will be given the chance to pay their respects to her.

Aretha's publicist tells People magazine that on August 28 and 29, public viewings will be held at the Charles H. Wright Museum of African American History in Detroit, Michigan, where members of the public will be able to visit the 'Respect' hitmaker between 9am and 9pm.

The music icon's funeral will then take place on August 31 at Greater Grace Temple in Detroit, but the ceremony - which will begin at 10am - is strictly limited to friends and family of the late singer.

Following the ceremony, Aretha will be laid to rest at Woodlawn Cemetery, where several of her family members - including her father, brother, and two sisters - are also buried.

The 'Natural Woman' singer passed away after having been "gravely ill" for some time.

In a statement, her family said: "In one of the darkest moments of our lives, we are not able to find the appropriate words to express the pain in our heart. We have lost the matriarch and rock of our family. The love she had for her children, grandchildren, nieces, nephews, and cousins knew no bounds.

"We have been deeply touched by the incredible outpouring of love and support we have received from close friends, supporters and fans all around the world. Thank you for your compassion and prayers. We have felt your love for Aretha and it brings us comfort to know that her legacy will live on. As we grieve, we ask that you respect our privacy during this difficult time."

Aretha Franklin, the music icon, legendary singer and "Queen of Soul" loved by millions whose history-making career spanned six decades, died at her Detroit home on Thursday. She was 76.

The multiple Grammy winner cemented her place in US music history with a powerful, bell-clear voice that stretched over four octaves. In a career crossing generations, her hits spanned from soul and R&B, to gospel and pop.

After a long battle with pancreatic cancer, Franklin passed away at 9:50 am (1350 GMT) surrounded by her family and loved ones, her family said in a statement issued by her publicist.

"It is with deep and profound sadness that we announce the passing of Aretha Louise Franklin, the Queen of Soul," the statement said.

"We have lost the matriarch and rock of our family. The love she had for her children, grandchildren, nieces, nephews, and cousins knew no bounds."

The family thanked fans around the world for their "incredible outpouring of love" since it first emerged earlier this week that she was gravely ill.

Fans mourning the death of Franklin left balloons, flowers and mementos at Detroit's New Bethel Baptist Church, where as a child the star kicked off her storied career singing gospel.

Reverend Charles Turner described her passing as a "Great loss -- can't nobody replace her," adding that the grief felt by mourners was akin to the loss of a parent.

In this Oct. 16, 2011 file photo, Aretha Franklin sings before President Barack Obama speaks during the dedication of the Martin Luther King Jr. Memorial in Washington.

And in California similar tributes quickly amassed on Franklin's star on the Hollywood Walk of Fame.

In this April 17, 1978 file photo, Aretha Franklin and her new husband, Glen Turman, arrive at a Los Angeles hotel for their wedding reception.

In 1987, she became the first woman ever inducted into the Rock and Roll Hall of Fame. In 2010, Rolling Stone magazine put her at the top of its list of the 100 greatest singers of all time, male or female.

She performed at the inaugurations of presidents Bill Clinton and Barack Obama, singing "My Country 'Tis of Thee" at the investiture of the country's first African-American head of state.

In this May 17, 2011 file photo Aretha Franklin and Oprah Winfrey acknowledge fans during a star-studded double-taping of "Surprise Oprah! A Farewell Spectacular," in Chicago.

In a heartfelt tribute from the Obamas, the former president and his wife Michelle praised Franklin's "unmatched musicianship," which they said "helped define the American experience."

"Every time she sang, we were all graced with a glimpse of the divine," the Obamas said in a statement. "In her voice, we could feel our history, all of it and in every shade - our power and our pain, our darkness and our light, our quest for redemption and our hard-won respect. She helped us feel more connected to each other, more hopeful, more human."

US President Donald Trump called the singer "terrific," saying she "brought joy to millions of lives and her extraordinary legacy will thrive and inspire many generations to come."

Clinton and his wife, former secretary of state Hillary Clinton, on Thursday hailed her as "one of America's greatest national treasures."

Singers and musicians quickly flooded social media in mourning her passing, which came on the same day that fellow US music giant Elvis Presley died at his home in Memphis, the city where Franklin was born, 41 years ago.

Paul McCartney called Franklin an inspiration and "the Queen of our souls," while Diana Ross hailed her "wonderful golden spirit." 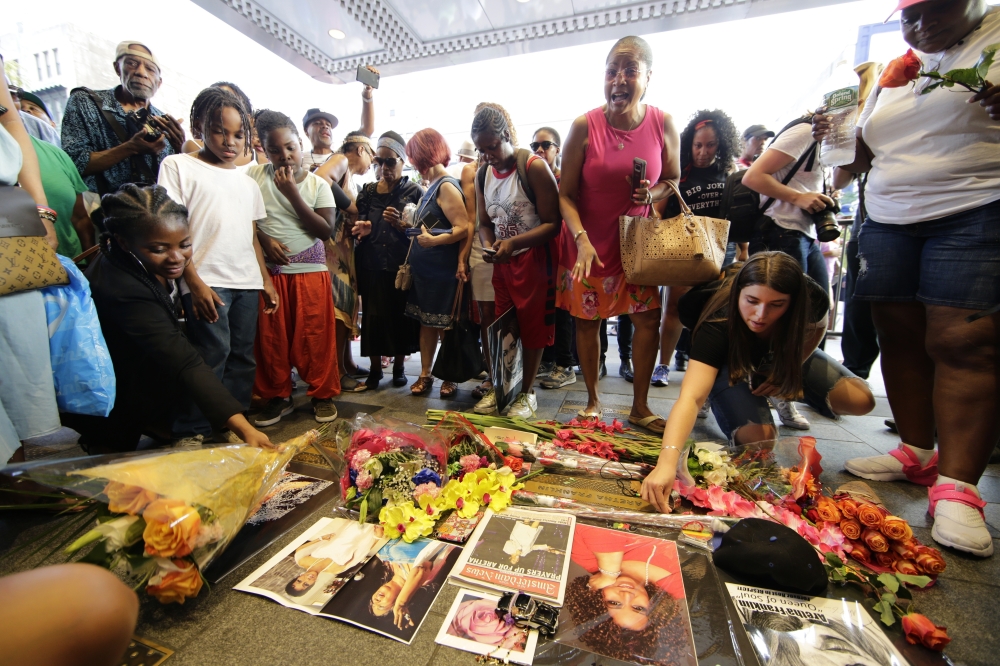 People place flowers at a makeshift memorial at the nameplate for singer Aretha Franklin outside the Apollo Theater. Photo: AP