Katrina Kaif bonded with ex-boyfriend Salman Khan when they met up during 'Fitoor' promotions in 'Bigg Boss'.

Recently the media was abuzz with news that Katrina and Salman had gone for a late night long drive.

This news was interesting given the fact that Katrina just recently broke off with long time boyfriend Ranbir Kapoor.

Rumour mills were abuzz that Salman has become Katrina's shoulder to lean on, during these trying times.

However, the 'Fitoor' beauty has rubbished these rumours. Katrina's spokesperson denied this news saying, "The reports that have been floating are baseless and untrue. Wish the media would stop fabricating these stories".

Indian actress Kangana Ranaut is known for her honesty and candid remarks.

In most of her interviews Kangana doesn't mince words - at times slamming the movie industry or randomly picking on her colleagues.

Kangana has been making headlines for the past one week thanks to her devil-may-care attitude.

And this time Kangana is out to take on Hrithik Roshan.

Alleged ex-flames Hrithik and Kangana are spilling the beans on each other through social networking sites and interviews.

Since, the time when she referred Hrithik as her 'ex', Kangana-Hrithik's fight is going on but seems like there is a new twist in the story.

There were rumours of Hrithik using his influence and axing Kangana from 'Aashiqui 3' as he didn't want to share screen with her anymore.

Soon after that, Kangana referred to Hrithik as a 'silly ex'. Just when we were hoping things to calm down, Hrithik took it to Twitter and ridiculed her (indirectly).

According to the reports of Spotboye, the 'Tanu Weds Manu Returns' actress is openly blaming Hrithik's 'Mohenjo Daro' co-actress, Pooja Hegde for her breakup.

Well, earlier rumours coming from the sets indicate that Hrithik and Pooja were more than just co-stars.

They also share a very intimate scene in the movie. 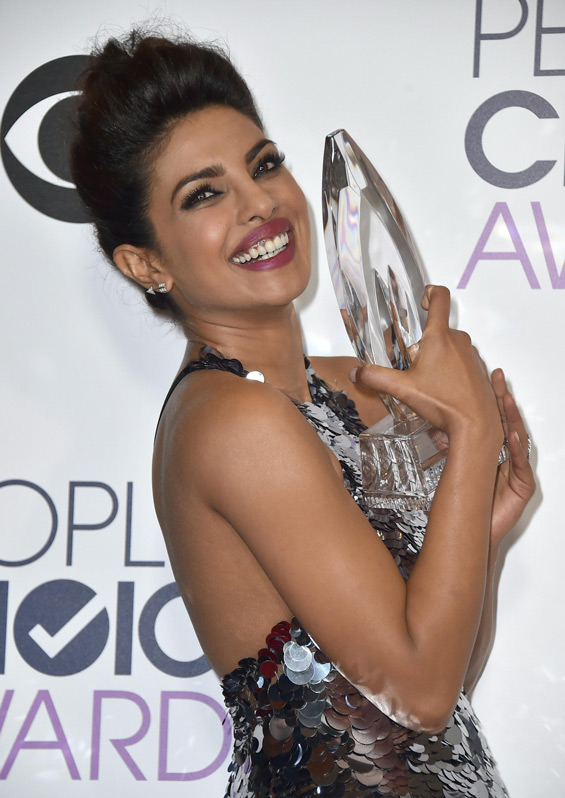 Priyanka Chopra poses in the press room with the award for favorite actress in a new TV series. (AP)

Indian catress Priyanka Chopra is undoubtedly one of Bollywood's most celebrated stars at present.

The 33-year-old, who was last seen in the critically acclaimed 'Bajirao Mastani', is making waves in Hollywood. Her TV series 'Quantico' has impressed the audience in the West and Chopra is hopping from one red carpet event to another.

During an interview given to a leading magazine, the actress recently opened up about her take on romance. She emphasized that her prince charming should be someone who can keep her happy and entertained at all times.

"I get bored very easily, so a man who can keep me engaged is surely worth it. I believe that an ideal man should be able to arrest a woman's attention." 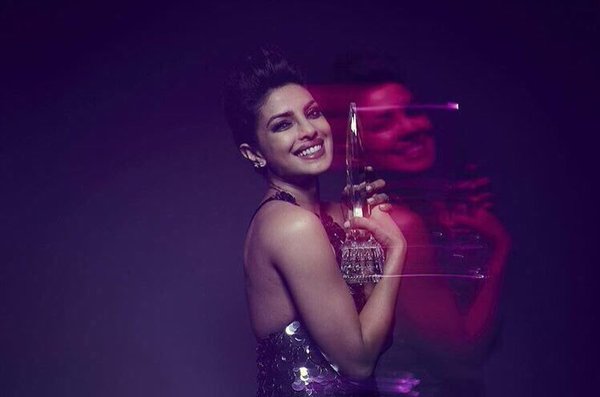 Interestingly, Priyanka also hinted that she is all set to tie the knot in the near future. We wonder who the lucky man is going to be.

On the professional front, Priyanka will soon in 'Jai Gangaajal'. Moreover, she has also been chosen as one of the presenters at the Academy awards.

Salman Khan is known for bringing a smile on the faces of his near and dear ones, quite regularly.

This time, his ex-girlfriend Katrina Kaif was at the receiving of the actor's sweet gesture.

Recently, Katrina visited another TV show to promote 'Fitoor' along with her co-star Aditya Roy Kapur and director Abhishek Kapoor.

The show was going as per the plan. However, something unexpected happened.

Katrina was pleasantly surprised to see Salman suddenly landing up on the show. Salman also caught Aditya by surprise.

Ever since Katrina allegedly broke up with Ranbir Kapoor, she has developed a close bond with Salman.

Right after the break-up, Katrina was seen having a candid chat with Salman at 'Sultan' director Ali Abbas Zafar's birthday bash.

Later on, Kat was also happy to be a part of the finale of Salman's reality TV show to promote her upcoming flick.

Is Katrina hinting Ranbir was dishonest?

The hot topic of conversation in Bollywood lately has been Katrina Kaif's love life, and her supposed break-up with boyfriend Ranbir Kapoor.

If you were expecting a meltdown, there is none. Unfazed by the probing media, she has been responding every question, never giving away her deepest thoughts.

The definition of love for Katrina narrows down to the basics – honesty and sticking to her loved one - no matter what may come.

The actress doesn't mince her words and paints a clear picture of her definition of love.

In an interaction with a leading daily, she admitted that the onscreen love stories sweep her off her feet and in reality she strongly believes in marriage and in 'the ability to love someone forever.'

On being asked about her views on infidelity, Katrina stated, "I would never be disloyal to the person I love. My loyalty would be only to that person."

And what are the qualities the actress feels that are must-have in a man? "Integrity, humour and kindness; I don't like dishonesty and indecisiveness."

Industry insiders were abuzz with news that Hrithik Roshan got Kangana Ranaut ousted from the third sequel of 'Aashiqui'.

It was rumoured for a long time that Bollywood heartthrob Hrithik was seeing Kangana, however, Hrithik was not very keen on going public about their relationship.

According to a report in Spotboye.com, when the makers of 'Aashiqui 3' came up with the idea of casting Kangana opposite Hrithik, the latter frowned upon the idea and asked them to think of a different star.

When Kangana was asked about how true are these reports, she told Pinkvilla, "Yes, many lame rumours are doing rounds, even a dumb *** can tell where these rumours are coming from. I don't know why exes do silly things to get your attention. For me that chapter is over and I don't dig graves."

In one go Kangana accepted their relationship but also declared loud and clear that it is now a thing of the past. 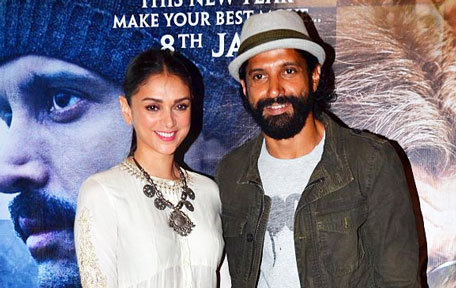 Bollywood seems to be rife with biggest break-ups in recent times.

Not long after Ranbir Kapoor and Katrina Kaif's alleged break-up, long time married couple Farhan Akhtar and Adhuna issued a joint statement about their divorce and shocked the country.

The couple famous for their style quotient in the industry were married for over 15 years.

According to a report in DNA, the real reason behind the couple's marriage going kaput is Aditi Rao Hydari.

Aditi and Farhan starred in 'Wazir' and have been really fond of each other.

Their growing proximity towards each other was the main reason Farhan and Adhuna started having multiple fights.

While the couple was still going through a lot of stress, Farhan who usually attends events and parties with wife Adhuna was suddenly seen making appearances alone.

But it's said that the hell broke loose at filmmaker Karan Johar's party last week where Farhan decided to make an entry with Aditi hand in hand.

It is being said that post the fiasco, Adhuna decided to separate from Farhan.

The gossip mills are abuzz with the speculations of Ranbir Kapoor and Katrina Kaif's breakup, but the two haven't officially confirmed it yet.

With each passing day, the relationship between Ranbir and Katrina seems to get more worse.

And now the latest rumour is Ranbir threw a party at his new apartment and didn't invite Katrina.

This rumour has added more fuel to the fire. While the speculations have been rife for quite some time that there have been tensions in Ranbir and Katrina's relation, but now it seems the two have parted their ways.

Ranbir has moved to the his new apartment but Katrina is still said to be at the couple's love nest.

According to reports, Katrina is still trying to solve the issues between the two.

On the work front, Ranbir Kapoor and Katrina Kaif will next be seen in 'Jagga Jasoos'.

From sneaking into Salman's house (as rumours suggest) to being at his side on his 50th birthday (as seen in pics), Iulia seems to be acing the girlfriend act to the T, but looks like there is trouble in love paradise for the alleged couple.

The duo's prolonged arguments have set rumour mills abuzz. As reported by a leading tabloid in India, Iulia Vantur is highly insecure of Salman Khan's closeness to Daisy Shah and Zarine Khan.

While she and Salman argue over her possessiveness, this one time, reportedly Iulia lost her cool and confronted Daisy about it. 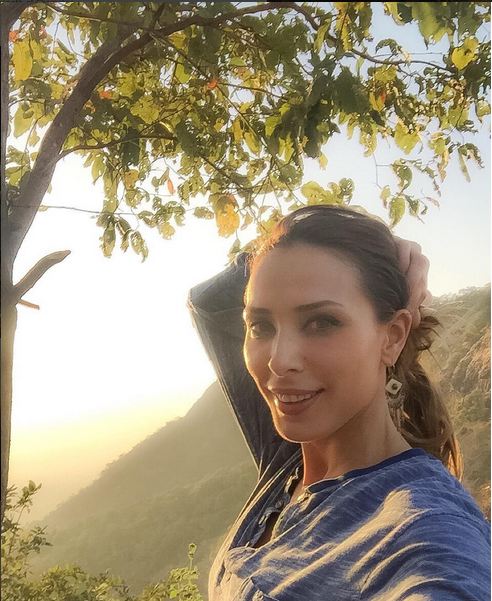 The two ladies are alleged to have had a heated argument with a crazy war of words.

Salman, however, is in no mood to change his ways as reported by Spotboy.com.

Sushant Singh Rajput and Ankita Lokhande have been in a relationship for a long time now.

They have finally confirmed that they will be walking down the aisle by end-December 2016.

The duo, who have been dating each other since their television days, looked comfortable sharing their wedding date with the media during Filmfare pre-awards party.

When the media asked them what their wedding plans were, Sushant said: "Yes, we will be getting married in December this year!"

Actress Asin Thottumkal is all to tie the knot with beau Rahul Sharma and will have an intimate wedding in January with just family.

It will be followed by a reception in Mumbai on January 23.

And the guest list is restricted and includes only people very close to the couple.

As the D-date appraches, the actress handed out the first invite to none other than Akshay Kumar.

Asin posted on her Instagram and shared, "The best man at the wedding obviously gets the first card of the wedding reception @Akshaykumar #ARwedding #MumbaiReceptionMainInvite#Bestiegetsfirstdibs."

Apparently, Rahul is Akshay's close friend and it was Akshay who made Asin and Rahul meet for the first time. The credit of their love story rightly goes to the action hero. 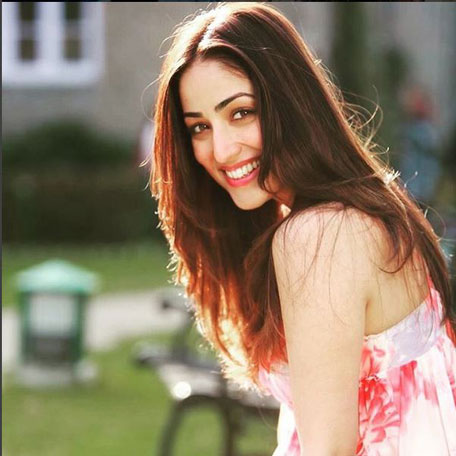 So will it be Yami Gautam finally opposite Hrithik Roshan?

Just a while ago director Sanjay Gupta had signed on Hrithik Roshan under the banner of Hrithik’s father Rakesh Roshan’s company for a film that is to see Hrithik as a blind man.

Actor-writer Sudanshu Pandey threw in a spanner in the works claiming that it was his script and has dragged the Roshans and Gupta to court.

Coming back to the story, Kareena Kapoor was first approached to play the heroine in the film, but she refused for two reasons.

One, she did not want to play a blind person.

Secondly, her screen presence was a tad too low for her liking.

Then Parineeti Chopra was asked to be the heroine.

The actress who has been in the news for her hot new look refused the offer politely stating her projects with Yash Raj Films as the reason for her inability.

Then it was Anushka Sharma who was asked to be the heroine.

Anushka, too, could not do the film after agreeing to the idea, because the dates did not seem to work out.

Anushka is busy with her next home production film after ‘NH 10’, and Hrithik wants to shoot immediately after ‘Mohenjo Daro’ because he has a big budget film coming up after this.

Hrithik in the, meantime, has also committed to Yash Raj Films and Aditya Chopra to work in a film called ‘Thug’ directed by ‘Dhoom 3’ director Vijay Krishna Acharya and will be busy with that after this Gupta film.

So it does seem that the ‘Vicky Donor’ actress Yami Gautam will be the heroine, unless the dates change again and provided Gupta and Roshan manage to scrape through the legal issues.