The Duke and Duchess of Sussex on Wednesday OCT 2 wrapped up a marathon tour of southern Africa by visiting South African President Cyril Ramaphosa after pledging millions for skills training for jobless youngsters.

The royal couple were welcomed by Ramaphosa and first lady Tshepo Motsepe in the capital Pretoria, where they exchanged gifts.

South Africa is battling stubbornly high unemployment levels at over 27 percent -- soaring to over 50 percent among young people. 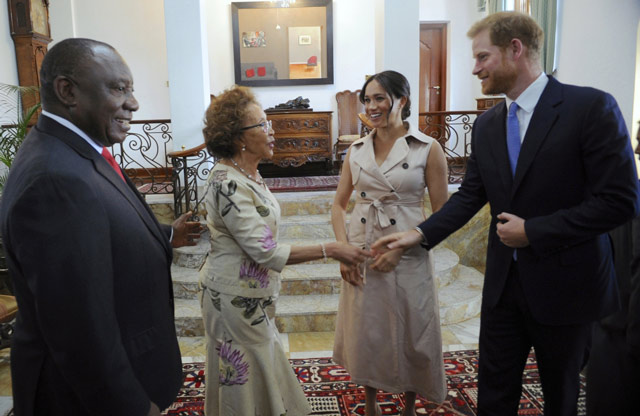 "Africa needs to create 20 million jobs by 2035, and while youth unemployment is a global challenge, it's particularly a problem here where nearly 57 percent of young people are unemployed," the prince said.

"Yet I have seen strength, resilience, a sense of hope and empathy that I can only aspire to replicate," he said.

The pressure is mounting for Ramaphosa, who vowed to reduce unemployment to 14 percent in the five years after his election in May.

The royal couple - who also carry the titles of Duke and Duchess of Sussex -- also spoke at the residence of the British Trade Commissioner Emma Wade-Smith, focusing on the importance of investments and business between Britain and South Africa.

The UK was South Africa's sixth largest global trading partner in 2017, with total trade at 79.5 billion rand ($5.18 billion, 4.76 billion euros), according to the presidency. 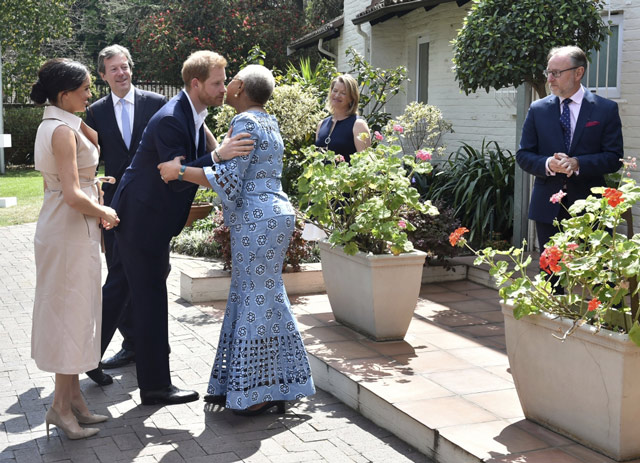 "When Africa prospers, the world prospers," Harry said,adding that the Africa Investment Summit, hosted in London next year, would be a "fantastic" opportunity to showcase Africa's potential.

Meghan reflected on the inner strength of Africa's female entrepreneurs in the face of economic and social challenges.

"At our visit earlier this morning I was struck by a small sign that was posted on the wall for the female entrepreneurs - and it said: "visualise your highest self, and show up as her'," Meghan told the audience. 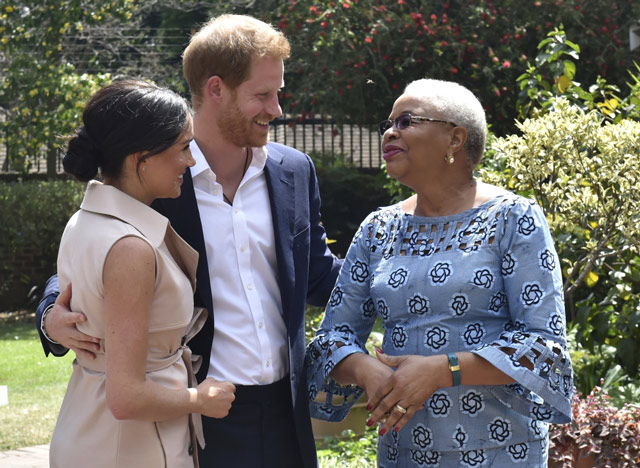 "This is the spirit of the women and girls I have met on this trip."

On their final day in the country, the royal couple also met Graca Machel, the widow of South Africa's first post-apartheid president, Nelson Mandela.
She shared a warm embrace with Harry, whom she last saw in 2015.

Machel, who does development work with women across the continent, told the duchess she was certain they would be working together in the future.
"I can feel the vibe," said 73-year-old Machel.

It was Harry and Meghan's first official tour as a family since their son Archie was born in May.

Little Archie also had the privilege of meeting one of South Africa's iconic anti-apartheid figures, Archbishop Desmond Tutu at his home in Cape Town.
While Meghan and Archie stayed in South Africa, Prince Harry visited Botswana, Malawi and Angola.

In those southern African states he advocated against illegal wildlife trade, and called for governments to act to slow down climate change and bolster conservation efforts.

In Angola Prince Harry paid what he described as an "emotional" visit to a street that was still a minefield when his mother Diana visited in 1997, shortly before her death. 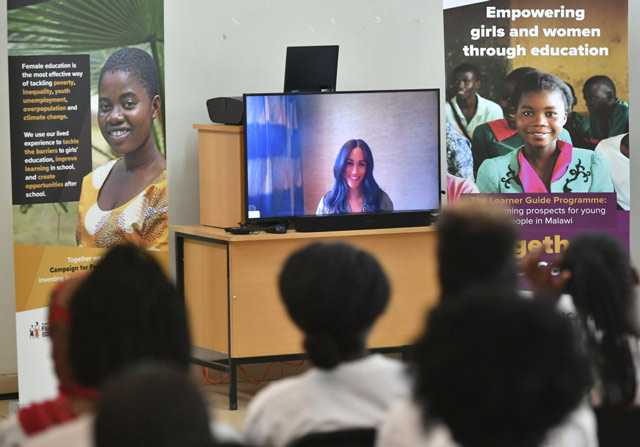 Meghan, Duchess of Sussex appearing via Skype during a visit by the Britain's Prince Harry to the Nalikule College of Education on day seven of the royal tour of Africa in Lilongwe, Malawi, Sunday, Sept. 29 2019.

The Duchess of Sussex has made a virtual appearance to pay tribute to the "valuable and vital" work thousands of women are undertaking to support schoolgirls through their education.

Meghan praised the female advocates via a video conferencing link from Johannesburg, as Harry sat with the group in a college in Lilongwe, the capital of Malawi.

The Duchess of Sussex donated a bag of her son's clothes to a charity she visited on Wednesday (25.09.19).

The 38-year-old former actress - who was known as Meghan Markle before her marriage to Prince Harry - spent time with women from the Mothers2Mothers organisation in Cape Town and before she left, she handed over a bag of garments previously worn by four-month-old Archie and some of her friends' children so they could be used again. 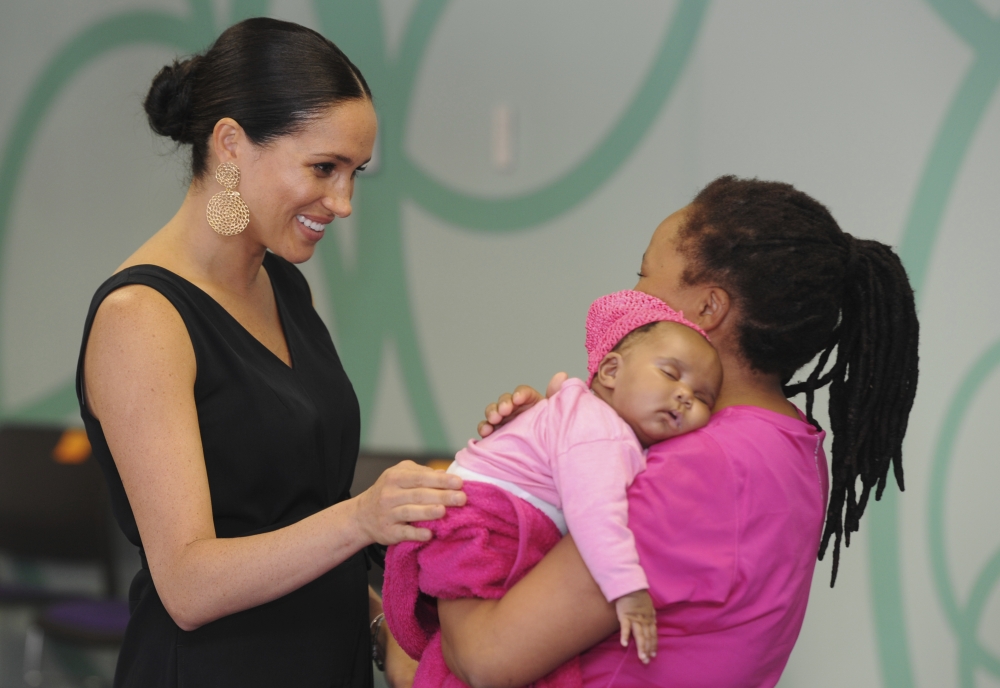 She said: "It's so important we're able to share what's worked for our family and know that we're all in this together with each other. So we wanted to share something from our home to each of yours." 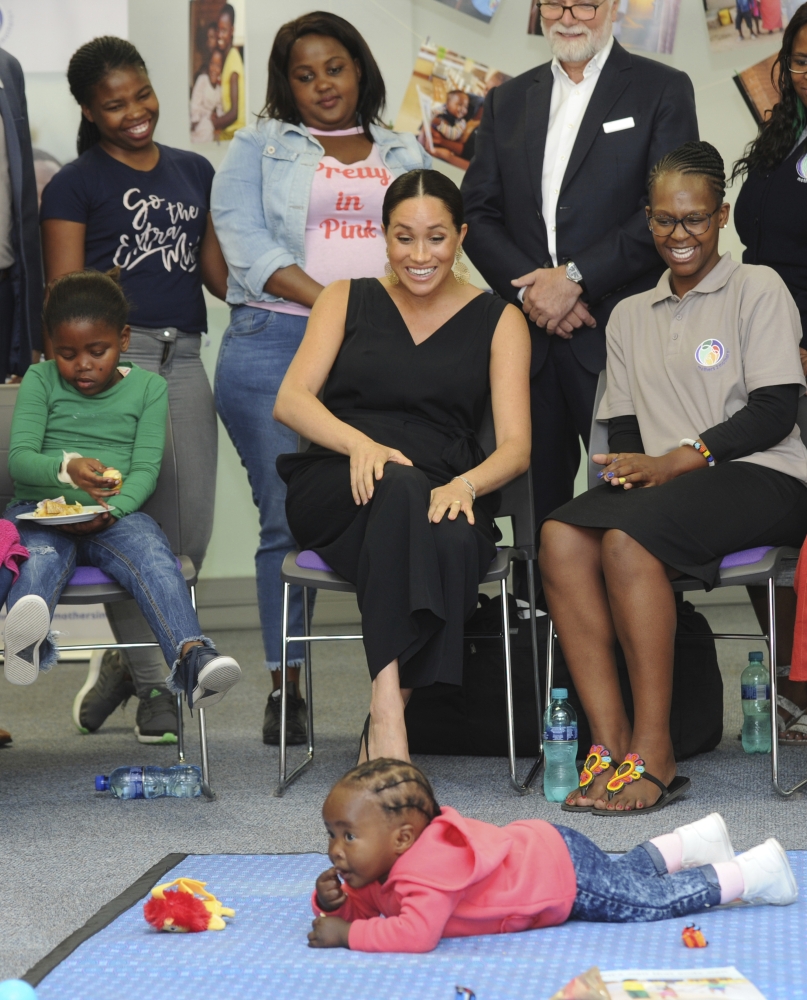 The Duchess showed off each piece to the group, including one vest bearing the slogan 'The Future' and another with the Invictus Games logo.

She said: "Here's a few little things that I thought would be helpful.

"I just thought that, in the spirit of community, what's so nice is to be able to share some of the things we have at home as well."

"And so we can obviously make sure everything you need is provided for you, but we've brought some of the things that my friends and I used for our kids and Archie that don't fit anymore." 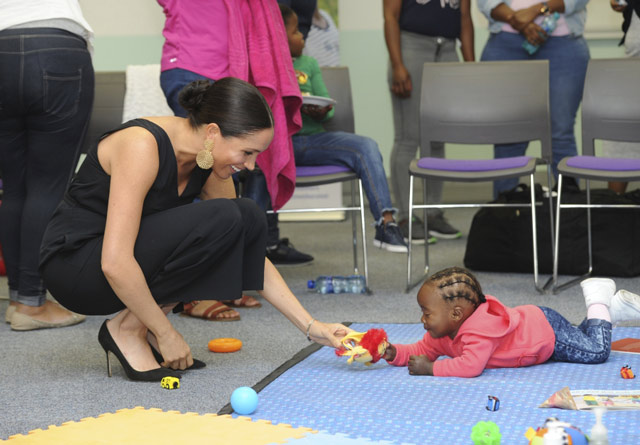 Meghan's meeting with the women from the organisation - which trains and employs women with HIV as frontline health workers - began with them sitting round in chairs, but the duchess quickly left her seat to sit on the floor, which was covered in toys, in order to make the gathered children feel more comfortable.

She said: "We should all sit down here. If it were Archie and we had all these toys in the middle, but I made him sit in the chair, it would be so unfair!"

Meghan spoke candidly to the group about being a working parent.

She said: "We're only five months in right now. Being a working mum and traveling as well with a baby, my goodness it's a lot, but it's all so exciting.

"There are days when it's a lot to juggle but then you meet someone and you have an impact on them and you say 'ah-ha,' and it's so rewarding."

The Duke and Duchess of Sussex, Prince Harry and his wife Meghan, visit Auwal Mosque, the first and oldest mosque in South Africa, in the Bo Kaap district of Cape Town, South Africa, September 24, 2019. 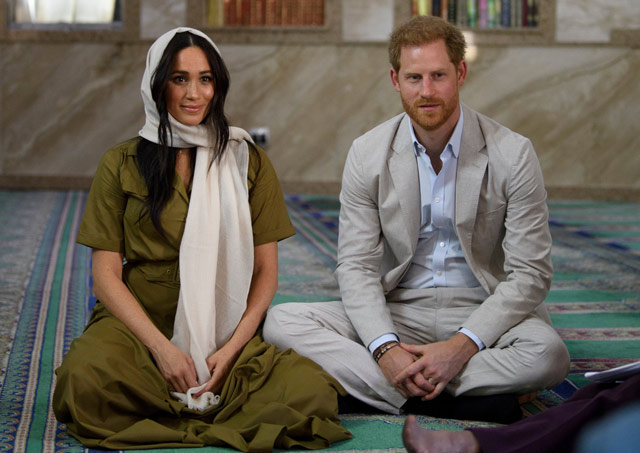 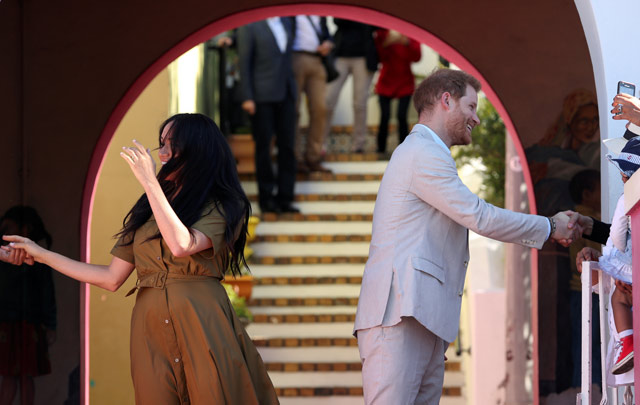 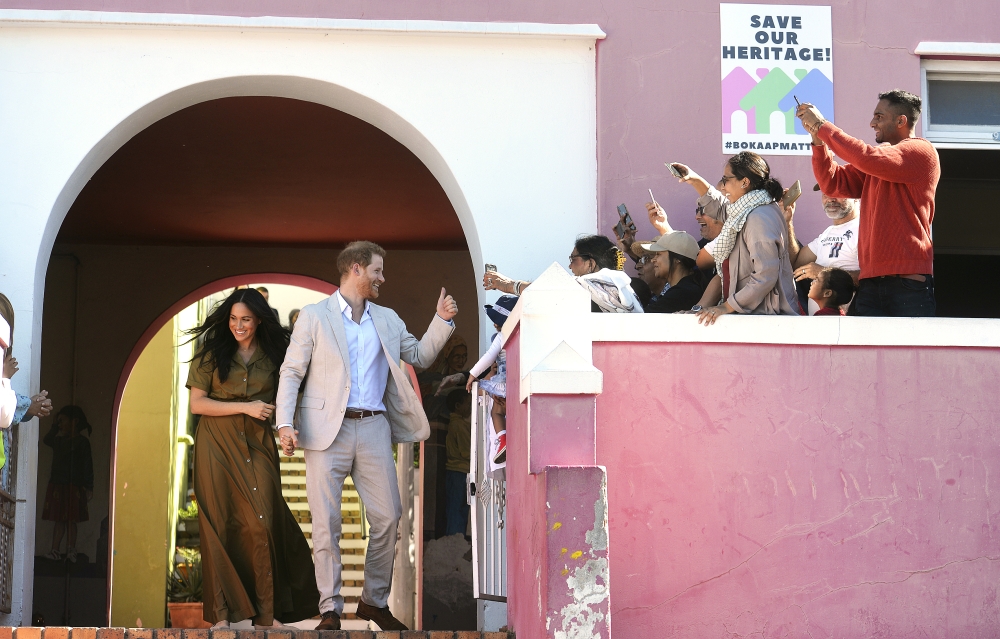 Britain's Prince Harry, right, and his wife, Meghan, the Duchess of Sussex, exit Auwal Mosque, the oldest in the country in Cape Town, South Africa, Tuesday, Sept, 24, 2019. The royal couple are on their second day of their African visit.

Prince Harry and family head to SAfrica for official visit

The Duke and Duchess of Sussex are scheduled to land in South Africa on Monday, bringing baby Archie along for their first official tour as a family.

Prince Harry, Meghan and their son will touch down in the coastal city of Cape Town for the first leg of their 10-day southern Africa trip.

The tour will begin with an education workshop in one of Cape Town's townships -- areas crippled by gang violence that sit just miles from the city's stunning beaches and rolling vineyards.

They will then visit District Six museum, a memorial to the forced relocation of some 60,000 non-white residents from the city centre during apartheid.

Harry, who has travelled widely across Africa, jointly founded the charity Sentebale in 2006, to help support children affected by HIV, after spending a gap year in Lesotho.

He and Meghan holidayed in Botswana at the start of their romance in 2016, and returned as a couple the following year.

For some in South Africa, the presence of Meghan -- a mixed-race American descended from slaves on her mother's side -- could make this royal visit particularly special.

Baby Archie, at less than five months old, will become one of the youngest royals to take part in an official visit.

The trip will also mark Archie's first major public appearance since his birth in May.

The duke and duchess have largely kept their son out of the spotlight, and some royal fans felt cheated when his christening was held privately.

He last appeared in public on the sidelines of a royal charity polo match in July.

The family is to remain together until Wednesday, when Harry will travel alone to Botswana, Angola and Malawi.

He will visit conservation and HIV prevention projects, and a cleared minefield in Angola through which his late mother Princess Diana famously crossed in 1997.

The duchess will remain in South Africa, where she will conduct various activities to raise awareness about women's rights.

She and Archie will reunite with Harry in Johannesburg next week, where they will complete the last day of the tour together and fly back on October 2.

Harry last saw Tutu in Cape Town in 2015, when he presented the archbishop with an honour in recognition of his services on behalf of UK communities and international peace.

Tutu and his wife have described their meeting with the royals, scheduled for Wednesday, as a "rare privilege and honour".

The family will be flying commercial after Meghan came under fire for using private jets several times during the summer.

Harry and Meghan said on Instagram earlier this year that they would be turning their "attention to the environment".