Jen Selter vs Kim Kardashian's battle of the selfies: Who's bringing up the rear? 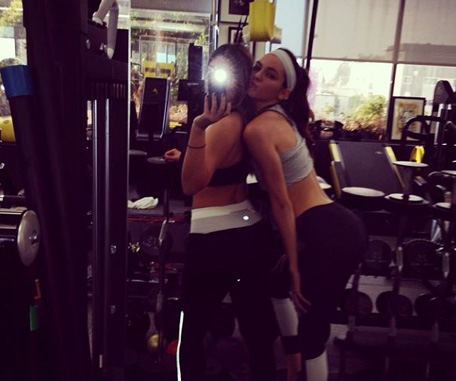 2014 has opening with only one online trend dominating the social network universe – the selfie.

The year’s early online battle to claim the title of queen of the selfie, at least for the first quarter, is turning into a battle between one of the divas of the medium – Kim Kardashian, and a newcomer, who ironically, is the creation of the medium itself – Jen Selter.

The battle is all about the curves and the figure with a clear emphasis on the type of ‘fullness’ that made Kanye’s West’s wife, and mother of North West, Kim, a paparazzi staple in the first place.

Post the birth of North West, Kim has surged back to shape as it were, despite speculation of hair loss and other fallouts.

Not wanting to bring up the rear in this battle of the sexiest figures, Kim, hit Instagram with a series of selfies, all aimed at, shall we say, showing her glute form thanks to her getting-back-in shape routine.

Jen Selter is the challenger. She stormed to the top of the Instagram and Twitter charts on the back of a ‘live’ blog that tracked the development of her figure, with a strong emphasis on the glutes, and what her gym routine was able to do.

To read what her story is about click here.

For the moment though, as Kim is proving she is back and full on form.

Kim Kardashian insists she has worked "so hard" for her post pregnancy figure and has slammed rumours she Photoshopped her Instagram photos.

Kim Kardashian insists she has worked "so hard" for her post pregnancy figure.

The 'Keeping Up with the Kardashians' star has blasted rumours she digitally altered a recent photograph of her and her friend Blac Cyna to make them appear thinner before posting it on Instagram.

Addressing the allegations on Twitter for the first time on Friday (10.01.14), the 32-year-old star wrote: "It sucks when people make up surgery or Photoshop lies when I am so disciplined & work so hard! Just trying to motivate others & show anyone struggling with weight they can totally achieve whatever they want if they are dedicated!"

The reality TV star recently revealed she has lost more than 50 pounds since giving birth to her daughter, North West, in Los Angeles in June.

Kim, who is engaged to rapper Kanye West, has been hitting the gym regularly and following the Atkins diet to slim down but recently revealed her New Year's resolution was to "get in better shape" in 2014.

The blonde beauty, who suffered from the condition preeclampsia while pregnant, which caused her body to swell, previously admitted she craved "everything with cheese" when she was expecting North and gained weight everywhere.