Meghan, Duchess of Sussex, will only take three months of maternity leave after she gives birth to her first child.

The 37-year-old former actress is expecting her first child with husband Prince Harry any day now, and although she has the opportunity to take a full year away from royal duties in order to care for her tot, sources say she's planning just three months off before she heads back to work.

Meghan - who was known as Meghan Markle before joining the royal family in May last year - finished her official royal duties six weeks ago but continues to work behind the scenes with various charities, and reportedly wants to return to public life in time for Queen Elizabeth's official birthday in June.

A source told The Sun newspaper: "Meghan has made it very clear she wants to return to work as soon as possible. She has huge amounts of energy, is extremely determined and wants to be as hands-on as possible with her charities.

"Nothing has been written into her diary just yet, as she wants to wait and see how she feels after having the baby. She's pencilled in three months, but she'll most likely return to public life in six weeks - on the Queen's official birthday, Trooping the Colour, in June.

"Three months' maternity is standard in the US for American mums - they don't normally get the six or even 12 months women get here in the UK. So this is totally normal for Meghan."

Prince Harry, 34, is also planning on taking paternity leave, though it isn't known how long he plans on being away from royal duties. 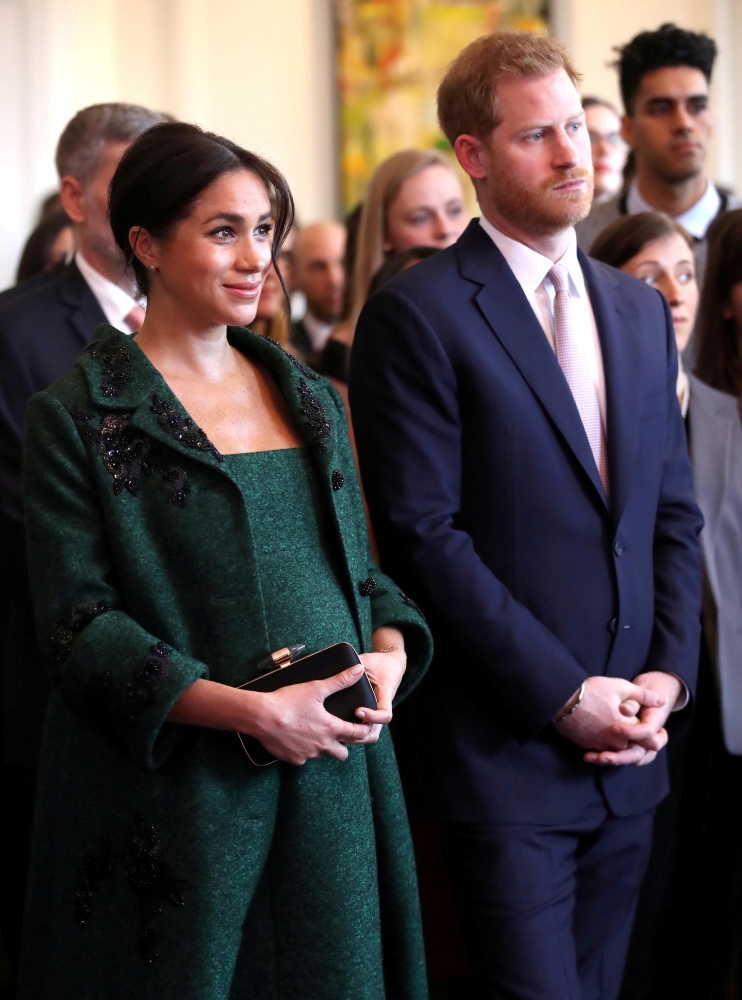 Meanwhile, it was recently claimed Meghan has been "nesting" with £60 scented candles from luxury brand Diptyque in her and Harry's new home at Frogmore Cottage.

A source said: "Meghan has really been struck with the nesting impulse in the last few weeks. She loves the candles and the cottage smells divine."

Bing users predicting Prince Harry's baby will be a girl

As excitement about the royal baby grows British Bing users are predicting that the couple are having a girl as 58 per cent searches are regarding Prince Harry and Duchess Meghan having a daughter.

Speculation is rife that the royal baby will arrive any day now and with Prince Harry and Meghan not letting slip what the sex of the tot is going to be fans of the British Royal Family have logged onto the internet for info.

Searches on Bing reveal that in March 83 per cent of searches about the royal baby were looking for the answer to the question 'Royal Baby - Boy or Girl?' and a Bing Poll suggests that 58 per cent of the public believe that Harry and Meghan will have a daughter.

Bookmakers have been offering generous odds on what the baby's name will be but Bing users are seemingly uninterested in wagering money on the tot's moniker as only 13 per cent of searches were looking for the name of the baby.

Thomas Markle's father won't be travelling to the UK for the birth of his grandchild but hopes he can reconcile with his daughter, the Duchess of Sussex.

The retired lighting director hasn't seen his daughter, Meghan, Duchess of Sussex since before she married Prince Harry last May and it seems that won't be changing soon because he's staying in the US for the forseeable future, even though the former actress is due to give birth this month.

Sources told TMZ that Thomas - who missed the couple's wedding due to health issues - has decided not to visit because he still hasn't reconciled with the former 'Suits' star and believes she is in a "cone of silence", but he is hopeful their relationship can be repaired after she has her baby.

Meghan's mother, Doria Ragland, arrived in the UK a few days ago and Thomas is said to be "glad" that she'll be by their daughter's side.

In February, Thomas made public a five-page letter which he'd received from his daughter last August, in which she told him she had "broken [her] heart into a million pieces" for causing her "unnecessary and unwarranted pain".

The note also complained he had made no attempt to contact her, rebuked him for giving interviews claiming he had been shunned, turning down their help and siding with her half-sister Samantha Markle with her "vicious lies", who she "barely knows".

In one extract, Meghan questioned why he told the media he had been in touch to tell her wouldn't be attending her and Harry's wedding after suffering a heart attack, because she didn't receive a call from him.

But he said: "I sent Meg and Harry a text telling them I wasn't coming. It was too dangerous after my heart attacks."

Meghan also hit out at her father for publicly criticising Harry, despite the prince being "nothing but patient, kind and understanding" and begged him to stop "exploiting" their relationship and "fabricating" stories.

And she insisted Thomas had done nothing to try and get in touch with her, despite his public claims she had rejected his attempts.

She wrote: "You haven't reached out to me since the week of our wedding, and while you claim you have no way of contacting me, my phone number has remained the same.

"This you know. No texts, no missed calls, no outreach from you - just more interviews you're being paid to do to say hurtful and harmful things that are untrue."

Thomas, 74, branded Meghan's lengthy letter a "dagger to the heart" and dismissed her claims, showing texts he believes prove he'd made attempts to communicate with his pregnant daughter and her spouse.

He said: "I thought it would be an olive branch. Instead, it was a dagger to the heart."