India-Pakistan relations are blossoming. At least in the world of films.

Bollywood’s star power is luring many Pakistani actresses to give up on their flourishing career in Pakistan and move base to India.

Over the years Mumbai film industry saw many aspiring actors come from different corners of India to get a foot-hold in Bollywood.

Times have changed and now, not only Indians but many other nationalities throng Bollywood to shine on the silver screen.

Bollywood is seeing a bevy of beautiful Pakistani actresses charming their way into cinemas and television. 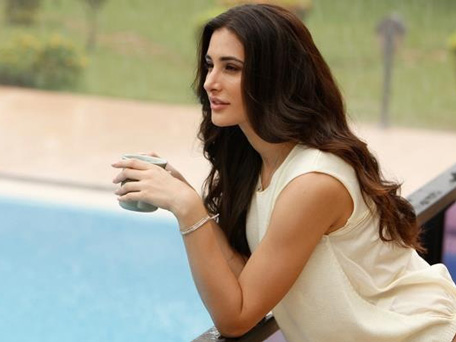 Nargis Fakri: Actress and model Nargis Fakri, who has Pakistani origin, mesmerised the whole of India in her debut film opposite Ranbir Kapoor in ‘Rockstar’. There is more coming from this beauty.

Mona Lizza: Pakistani starlet Mona Lizza is being re-launched in Bollywood as the lead actress of 'Murder 3' opposite Randeep Hooda.

Lizza made her official debut in Himesh Reshammiya's 'Kajraare', is hoping to get a fresh lease of life to her career by getting in the Bhatt camp and starring in 'Murder 3'.

Humaima Malick: She made headlines with her performance in Pakistani director Shoaib Mansoor’s ‘Bol’. And now, it looks like Humaima Malick has caught the attention of filmmaker Vidhu Vinod Chopra. Humaima is one of the girls in the running to play the female lead in Chopra’s next, ‘Chitthiyan’.

Humaima is believed to have done an elaborate look test with cinematographer Binod Pradhan at Chopra’s office.

Prominent personalities from the Pakistani TV and film industry including super model Mehreen Saeed who has been chased by many Indian filmmakers before Sanjay managed to sign her for his yet-to-be-titled film, which is believed to have Pakistan as one of its important backdrops.

Muskan Khan: The talented Pakistani Actress and Singer Muskan Khan, is all set to debut in Kabir Raj’s next project.

According to media sources, it was a dream of Khan to work in an international environment, and now her dream come true through Raj’s next directorial venture ‘Just MMS’.

Veena Malik: The actress who is known for her motor mouth, Veena Malik and her curves, her association with Ashmit Patel and her sizzling jig in Bigg Boss made her a household name.

Meera: Meera also debuted in an Ashmit Patel movie called 'Nazar', but lately she has been in news due to her controversy with Mahesh Bhatt. Meera is known to be the arch rival of Veena Malik.

Laila Khan: A lot of women had a desire to make love to Rajesh Khanna but those were in his heydays, not now.

Pakistani actress Laila Khan was doing exactly that in a movie released in 2008 'Waafa: A Deadly Love Story'. Rajesh Khanna got a lot of flak and Laila, well; she chose a wrong movie for her debut.

Somy Ali: Ex-girlfriend of Salman Khan and now one of his close confidantes, Somy Ali an actress of Pakistani origin, debuted in 'Anth', back in the 90s.

Then she did some really forgettable movies like Krishna Avtr, Yaar Gaddar and Andolan.

Following a bitter breakup with Salman Khan, Somy Ali packed her bags to US where she was involved in a lot of charity work. She also started a boutique business, the profits of which funded her charity 'Human Being'.

Zeba Bakhtiyar: Zeba Bakhtiyar debuted in an acclaimed movie oppposite Rishi Kapoor called 'Henna'. Last heard, she was in news for a high-profile split with ex-husband Adnan Sami and custody battle for her sons.

Salma Agha: Salma Agha is one of the most formidable Pakistani actresses who had a strong presence in the 80s. The song 'Dil Ke Armaan' sang nasally by her for the movie 'Nikaah' in 1982 made her win a Filmfare Award.