The last few weeks has seen a new take on the star wars 'Phantom' menace, one that is far removed from the George Lucas-directed episode.

In the aftermath of the ban slapped on Saif Ali Khan's latest thriller in Pakistan and the headline grabbing outcry that has seen award-winning actors and political henchman etch a new line of control for the entertainment industry, two singers attempt to rise above the 'Ban-istan' policies brandished in their respective countries for the love of their craft.

Speaking ahead of their concert in Dubai, Sonu Nigam and Atif Aslam stood united in their efforts to "leave politics for those who play the game."

Aslam, who has moved to Dubai this past year, stated: "There should never be any lines or demarcations in the creative field. Arts and music transcends such petty politics. 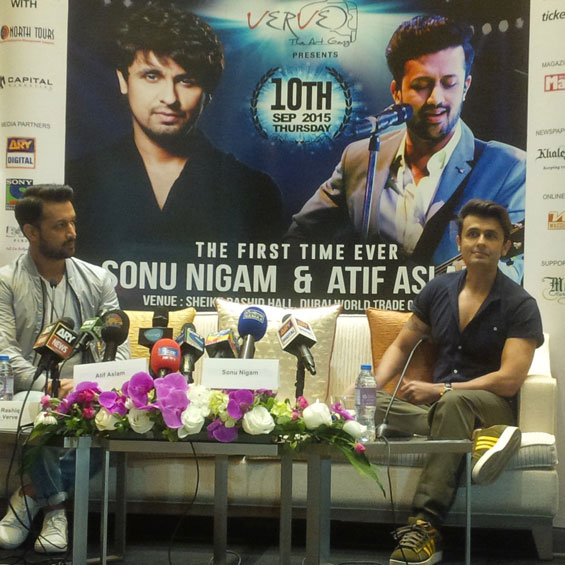 "Which is why, both Sonu and myself, were united in our decision to perform together, as one unit. Audiences in Dubai will not be seeing two solo concerts on one stage tonight; they will see us performing largely together as a tribute to India and Pakistan."

Nigam's and Aslam's responses stem from the controversy broiling in the media following Khan's comment stating he had no "faith" left in Pakistan after 'Phantom' was banned in the country.

The actor's statement followed a string of scathing replies from Pakistan's notable actors, including Shaan and Hamza Ali Abbasi.

Nigam dismissed the hullabaloo surrounding the film and its aftermath, saying: "We will show the people how two artistes, from India and Pakistan, can share a stage in the name of unity. This concert will set an example of how the community needs to behave.

"But why preach; I believe our work will speak for itself."

The duo refused to further divulge the collaboration act planned for tonight's concert at Dubai World Trade Centre; however, the award-winning singers stated the performance will pay tribute to the UAE martyrs who lost their lives in Yemen.

Neither artiste has shied away from controversy during their musical journey, with Nigam the more vocal of the two, be it his stance on the headline grabbing Radhe Ma scandal or his refusal to sing for Bollywood over legal rights.

Quiz Nigam and he states: "I don't believe in mincing words. I consciously moved away from singing in Bollywood because of the obnoxious illegal contracts we as singers were being forced to sign. 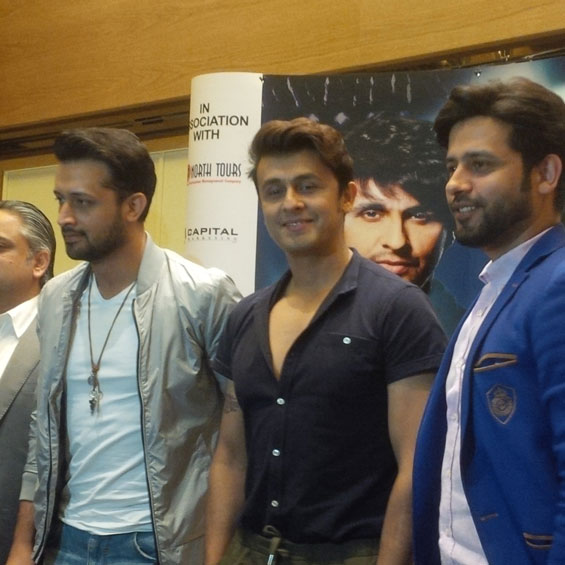 "Someone had to take a stand, and I was chosen as the man to do so."

Nigam further revealed, his stance lost him some plum projects, adding: "I had dubbed for 'Hangover' [later crooned by Salman Khan for 'Kick'] and 'Galat Baat Hai' ['Main Tera Hero'] but those tracks were dropped in lieu of another stepping in my place.

"I had the courage to stand and today, everyone is benefiting from the same."

Aslam, meanwhile, has won acclaim and drawn harsh criticism for his Coke Studio Qawwali, 'Tajdar-E-Haram', which was originally composed by the Sabri brothers.

The Pakistani singer has angered purists that have found fault with the recomposition and his Urdu diction, to which Aslam simply has to say: "You can't compete with legends such as them. This rendition was giving them respect. You must understand, this was a 20-minute Qawwali that had to be restricted to 10 minutes. That in itself was extremely challenging."

Aslam is also looking forward to another phase in his career, with the singer confirming he is considering Bollywood film projects as a mainstream actor, much like his peers Ali Zafar and Fawwad Khan.

He stated: "Bollywood production houses are in touch, yes, but it would be very crazy to take everything on without committing my 100 per cent. I have sidelined movies in the past and maybe I need acting classes too."

Nigam, who has a failed Bollywood career as a leading man, said he was happy sticking to what he does best.

"I am in the industry and people do question, if you have the resources, why not launch your own music production unit," he said. "But my reply is simple: I am not good at the business side of things. I should concentrate on what I do best."

As the singer celebrates over 30 years in the music industry, he states his one wish is the Indian music scene would not be so Bollywood centric.

"It is all about getting a Salman Khan to shake his leg in the video; the craft of music needs equal importance," he confessed.

But both the singers, who have sung for the Khan in question in the past, state they are content in their careers after years of struggle.

Aslam added: "My first gig saw me earn Rs500 in Pakistan", while Nigam revealed his first gig earned him a meager Rs200 in India.

Nigam added: "Today's singers earn at least Rs20,000 for a gig. The industry has progressed by leaps and bounds.

"My only hope is that the future generation of musicians remain true to their craft like we have."

Ask whether either would have their son enter the music industry and Aslam stated: "I wouldn't want my son to join this industry. I don't want to choose a career path for him.

"I wanted to be a cricketer and my parents did not let me. He will carve out his own career as he pleases."

Tickets for tonight's concert are priced at Dh500, Dh1,000 and Dh1,500. The remaining categories are soldout.