Keeping up with the Kardashians: Kylie Jenner's implant rumours

Kylie Jenner has admitted she is "surprised" that people think she has had plastic surgery as "there's no way in hell" her mother Kris Jenner would let her.

The 'Keeping Up With The Kardashians' star is bemused by the fact that people are convinced she has gone under the knife multiple times, insisting her mother Kris Jenner would never allow it.

When a Twitter used asked her why she has "more plastic in your body than a Barbie doll," she responded: "Well, I haven't done anything except my lips but nobody seems to believe that, so ... I don't really care. But, I did just turn 18, so it kind of surprises me when people think I've undergone so many surgeries.

Meanwhile, the 18-year-old beauty - who previously confessed to wearing Spanx and using waist trainers - recently denied she had got breast implants. 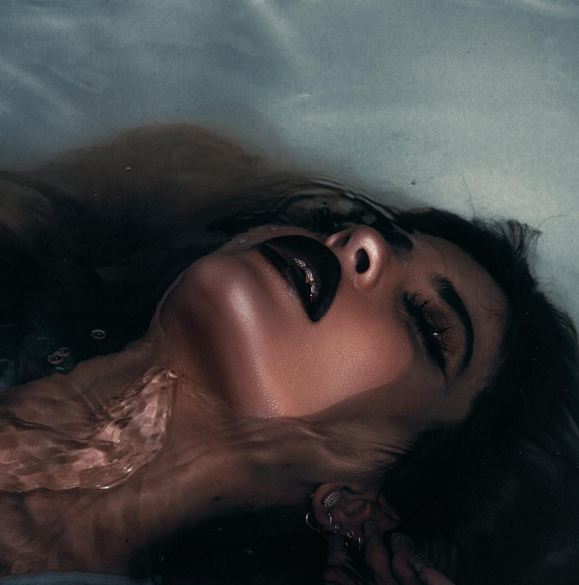 She shared: "No, people - I haven't gotten breast implants! Everyone is obsessed with that. Truth is, as I've gotten older, I've gained 15 pounds and my body has changed; I've definitely filled out.

"I swear there are things you can do to work on problem areas without having to think about plastic surgery. Contouring has changed my life!"

No 'split custody' for Kourtney

Kourtney Kardashian reportedly doesn't want her former partner Scott Disick to have split custody of their three children as she thinks he is a "drunk mess". 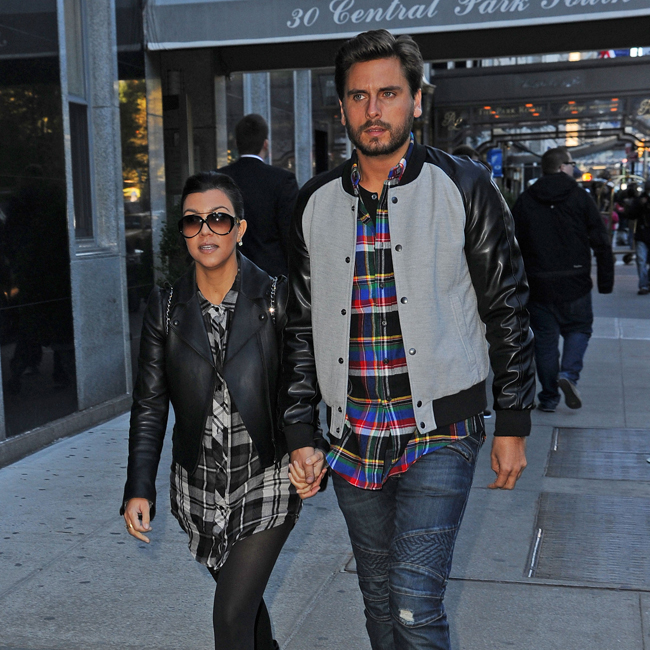 The 'Keeping Up With The Kardashians' star is reportedly planning to deny her former partner - with whom she has Mason, five, Penelope, three and Reign, nine months - equal access to their children as she doesn't think he's "fit to be a parent without supervision".

A source said: "Kourtney really seems finished with Scott this time. Everything is getting finalised [but] there is nothing in writing yet.

"However, Kourtney won't allow Scott split custody. She thinks he is a drunk mess and not fit to be a parent without supervision."

And whilst the 36-year-old television personality doesn't find it "easy" being a single mother, the insider claims she is used to it.

They added: "She will only agree to supervised and limits visits. Although being a single mom is not easy, Kourtney is used to taking care of the kids by herself. She has them on a great schedule and everything runs smoothly even when she is alone with them.

"She had some nanny help, too, since she is working, but she spends as much time as possible with the kids. They are her world and she loves being a mom."

Kourtney also keeps a close eye on the 32-year-old model but refuses to get upset by his "latest shenanigans".

A source told PEOPLE magazine: "She keeps an eye on Scott via social media and has come a long way and instead of getting upset about Scott's latest shenanigans, it helps her realise splitting was for the best."

Kendall Jenner has shocked fans after she was filmed riding the Underground last week when she touched down at London Heathrow from Paris, France.

The 19-year-old model, who usually travels via private jet or in first class, hopped on the chaotic mode of transport after she arrived at London Heathrow airport from Paris, France.

Taking to her website KendallJenner.com, the reality TV star uploaded a short clip of herself jumping on the train with her suitcase in tow after the sliding doors opened at the station.

She captioned the video: "A little taste of what my sisters and I were up to on live stream this week!"

Dressed in a smart black trouser suit with a pair of chunky headphones slipped over her ears, Kendall was bursting with excitement as she clung on to the handrails, while flashing her beaming white smile to the camera.

Despite her celebrity status, her fellow commuters seemed to be unfazed by her presence as they gazed out of the window and continued with their journey through the capital.

Kendall, who has become an in-demand model over the past two years, jetted into London last week after spending a few days working with Chanel boss Karl Lagerfeld.

Meanwhile, the brunette beauty - who strutted her stuff for designer brands Chanel, Balmain and Calvin Klein at numerous fashion weeks around the world last month, recently admitted her globe-trotting career is "exhausting."

She said previously: "I've learned that modelling isn't as easy as everyone thinks. There are a ton of early mornings and late nights-it's exhausting. And there's a lot of travelling... I have thought, 'What if it doesn't all work out, what else would I do?' I haven't figured it out just yet, but that's okay because I'm still young."

The 'Keeping Up With the Kardashians' star - who recently split from long-term boyfriend Scott Disick - arrived along to The Nice Guy in Los Angeles, but later left the venue with the 21-year-old singer, who kept his head down as they were pictured exiting the nightspot, before getting into a waiting SUV.

Despite their apparent closeness, it is unclear whether the pair had enjoyed a romantic date as the 'What Do You Mean?' singer is a long-time family friend of the Kardashians and has even babysat for the 36-year-old beauty's eldest son Mason, five, in the past. 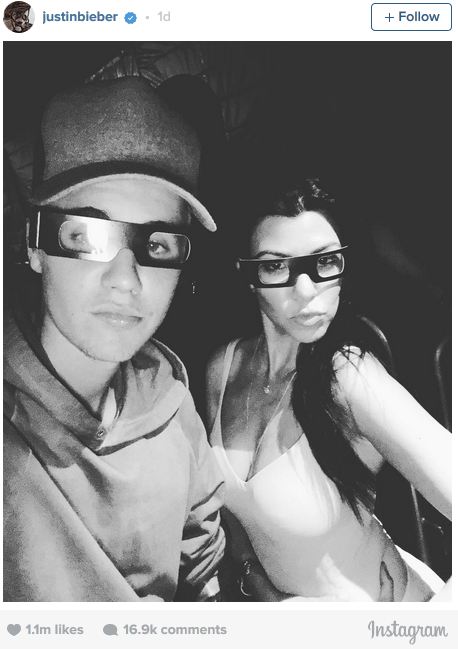 And the 'Beauty and a Beat' hitmaker seemed to enjoy the day too, as later he shared the same picture, captioning it: "cool fan (sic)"

But Kris has reportedly been keen for the pop star to date her 19-year-old daughter Kendall Jenner.

A source previously said: "Kris would absolutely love for Kendall and Justin to be the next 'it' couple. She adores Justin and thinks he is perfect for her daughter.

"And of course to have him on ['Keeping Up With the Kardashians'], would be a fabulous extra bonus. And believe me, she lets Kendall know it every opportunity she can."

Kendall and Justin have been linked romantically previously when they were seen dining together in Paris.

Kylie Jenner and Tyga were involved in a car accident.

The couple had enjoyed a night out at Los Angeles nightspot 10ak, where the 'Rack City' hitmaker had performed but their evening ended on a bad note when the rapper's $320,000 Rolls Royce was hit from behind by another vehicle.

Neither Kylie nor Tyga were hurt in the accident and the car suffered minor damage, with just a few scratches to the rear.

Meanwhile, 18-year-old Kylie has revealed she keeps a framed copy of Tyga's 2012 mugshot at her home.

The 'Keeping Up with the Kardashians' star has given fans a behind-the-scenes look at her $2.7 million Calabasas mansion, which she bought eight months ago, via her new app and has revealed it features a three-year-old police photograph of her rapper boyfriend.

The image was taken after Tyga spent a night in Clark County Detention Center in Nevada and sits below a vintage snap of Kylie's grandmother Esther.

Kanye West is "proud" of Caitlyn Jenner and the rest of his family for "breaking ground for the generations to come".

The 'All Day' rapper has shot down critics of his wife Kim Kardashian West's step-parent following her gender transition earlier this year and said he is thrilled to be part of the perception-changing family.

Asked about Caitlyn, he said: "F**k what people say, f**k what people think. I feel proud to be in a family that has so many people breaking ground for the generations to come.

"I feel proud that ... I could be next to a wave of thought of 'this is who I am'. And that is all I'm about. To let your life be controlled by public opinion would be like asking to sit in traffic for the rest of your life.

However, the father-of-one made a slip up during the interview with SHOWstudio and accidentally referred to Caitlyn as Bruce, which is what she was known as before her transition.

Telling a story about the former athlete, he said: "And Bruce just got off the exit sign and drove as fast as he wanted to.

"It's new, it's modern - you know what I mean? This is like Roman times bro, it's like this time we have on Earth, this 100 years, it's really the beginning of the future.

"We've finally tapped into the type of technology and acceptance and thought that we need to ... And look at the new Pope! Like, it's a bunch of dope mother***ers out here that I like. Just pushing towards the future."

Scott Disick "feels free" after splitting from Kourtney Kardashian and friends believe it would take "a miracle" for them to get back together. 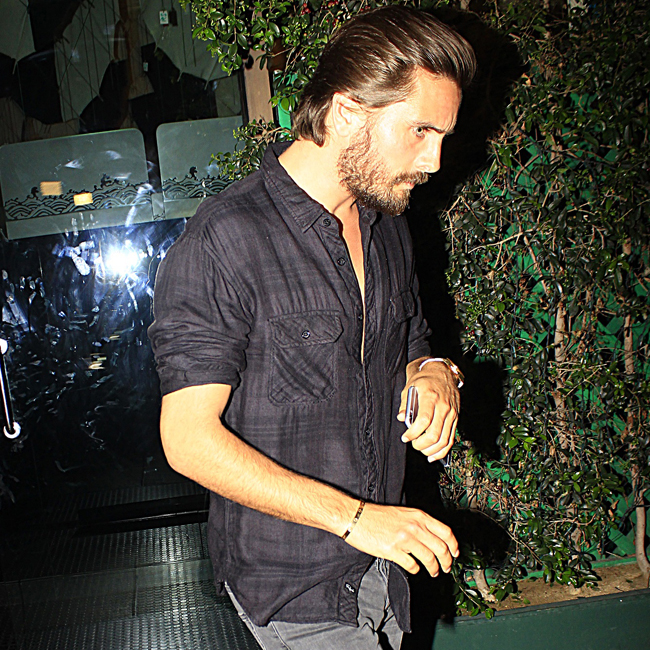 The 32-year-old star, who was dumped by the 'Keeping Up with the Kardashians' beauty after nine years together in July after he was spotted holidaying in the South of France with an ex-girlfriend, reportedly has no interest in rekindling their relationship.

A source close to the entrepreneur said: "Unless there's a miracle, he's not getting back with Kourtney. He feels free and ready to have fun."

Scott, who has three children, Mason, five, Penelope, three, and nine-month-old Reign with Kourtney, was recently photographed in Miami getting cosy with 18-year-old model Lindsay Vrckovnik, but isn't dating anyone seriously.

The insider told PEOPLE.com: "Scott likes to party with young hot girls. It's nothing serious.

"He's no longer tied down. [He] feels free to do whatever he pleases, and that's exciting."

A source close to Kourtney, 36, recently insisted she wasn't fazed by his new romance, adding: "She's moving on. She knows it's just a fling.

"She's trying hard to ignore it and just focus on the kids. She knows they'll never get back together."

But her mother Kris Jenner previously predicted the former couple would eventually work things out.

She said: "My wish is that, you know, they work it out and figure it out and we'll see what happens. He's a great dad and he loves the kids and he loves Kourtney... I love him."