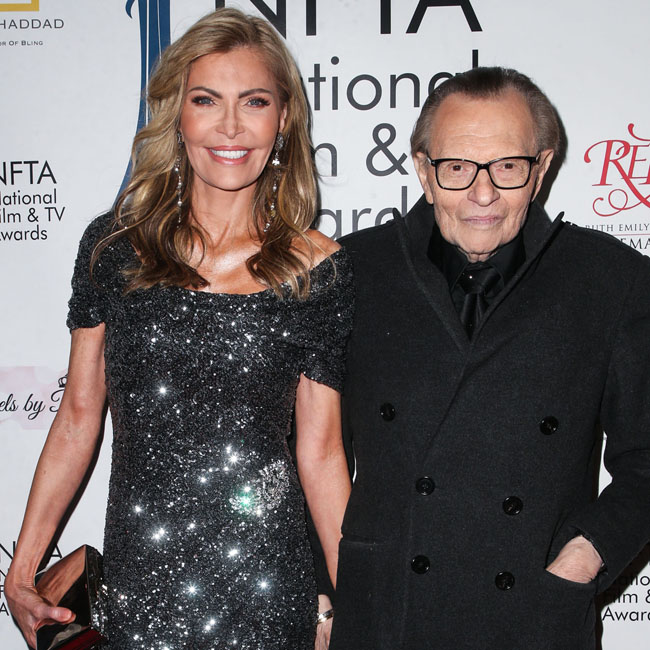 The 85-year-old TV legend filed legal documents on Tuesday to terminate his 21-year marriage to seventh spouse Shawn Southwick King and she is said to be "devastated" by the move.

Sources told TMZ that the 'Christmas Eve' actress had no idea Larry was planning to file for divorce and she only found out when she received a call from one of the website's reporters.

It had been claimed that Larry reached breaking point when he was in hospital after suffering a heart attack earlier this year as Shawn allegedly presented him with legal documents that would have given her certain rights to their property which would adversely affect their two sons, Chance, 20, and Cannon, 19, prompting them to urge their father to end the marriage.

However, according to an insider who spoke with Shawn, she'd been told Larry may only have three days to live and their estate planning lawyer had told them to update certain documents, which they had mutually agreed to do, and so she presented them to him in his hospital bed. Shawn "strongly denies" doing anything that would compromise her offspring's inheritance.

The 'Larry King Live' star had a rocky marriage with Shawn, 59, and it was alleged in 2016 that his estranged wife had been having an affair, although both Larry and Shawn later slammed the allegations.

Larry said at the time: "You said an interesting word, 'rumour.' I've been in the business - next May, it'll be 60 years - and I've dealt with rumours a long time. Interviewed people involved with rumours. Rumours are what they are - they're rumours. And I tell you the truth, I don't pay any attention to them."

The 'Bee Movie' actor married Shawn in 1997, and she was his seventh spouse after marriages to Freda Miller, Annette Kaye, Alene Akins, Mickey Sutphin, Sharon Lepore, and Julie Alexander.

Shawn, meanwhile, had been married three times before tying the knot with Larry.