Liam Hemsworth has posted a picture of the remains of his home, after it burned down in the Californian wildfires. 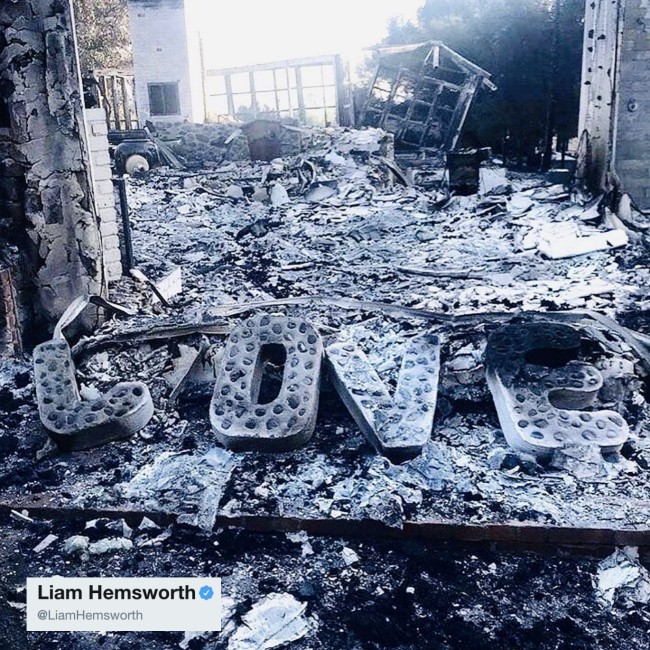 The 28-year-old actor evacuated the home he shares with fiancée Miley Cyrus over the weekend as the Woolsey fire tore through the Malibu and Calabasas area, and on Tuesday, he returned to the site where his house once stood, and shared a picture of the rubble, including concrete letters that spelled out "love".

Posting the snap on Twitter, Liam wrote: "It's been a heartbreaking few days. This is what's left of my house. Love. Many people in Malibu and surrounding areas in California have lost their homes also and my heart goes out to everyone who was affected by these fires.

Liam's post comes after 25-year-old 'Malibu' hitmaker Miley shared the "devastating" news that they had lost their home to the blaze, but she's "grateful" that she, Liam and their pets safely evacuated the abode before the fire hit, and she knows she'll always have fond memories.

She wrote on social media: "Completely devestated by the fires affecting my community. I am one of the lucky ones. My animals and LOVE OF MY LIFE made it out safely & that's all that matters right now.

"My house no longer stands but the memories shared with family & friends stand strong. I am grateful for all I have left.

"Sending so much love and gratitude to the firefighters and LA country Sheriff's department!

"If you are interested in getting involved see next tweet.... Donate $ , Time , Supplies I love you more than ever , Miley.(sic)"

The couple aren't the only stars to have lost their home in the fires, which have been raging since Thursday (08.11.18).

Robin Thicke and April Love Geary's house burned down over the weekend, shortly after they were evacuated from the property.

Meanwhile, stars including Cher, Liam Payne, Iggy Azalea, and Kim Kardashian West have all had to evacuate their homes.