Welcome to our Oscars fashion blog!

Hollywood's crème de la crème hits the Oscars red carpet for its annual show of glitz and pageantry honouring cinema's finest. The night is also about the drama unfolding on the red carpet.

88th Academy Awards not only draws the biggest names in Hollywood, but is one of the most politically-charged ceremonies of all time and will hosted by Chris Rock for a second time. 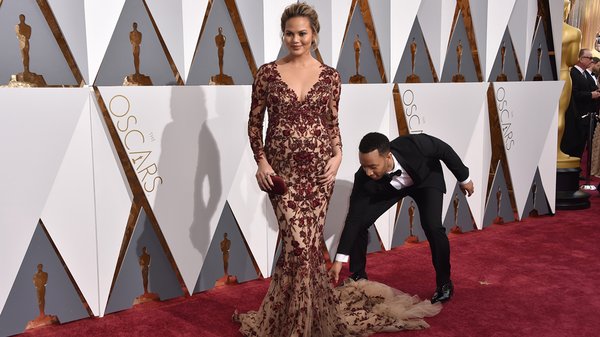 The glowing, very pregnant model stunned us all in a tight ruby red lace gown featuring intricate beading and sparkling flowers all over her belly.

John was so supportive, guiding his wife and baby-to-be down the red carpet. He stopped to fix Chrissy’s flowing train when they posed for pictures, kissed her on the cheek, then put his hand on her stomach.

Jennifer Lawrence, racy in lace, arrives at the Oscars in the nick of time. Make sure you don't take the tumble this time girl.

Jennifer Lawrence showed off her toned figure in a layered lace gown at the 2016 Academy Awards red carpet.

Posing up outside the Dolby Theatre, Jennifer looked perfectly poised - despite making a late arrival just moments before the show began.

The nominated peroxide-haired actress stunned in her custom altered plunging lace gown from Christian Dior’s Spring 2016 Couture collection which has just been unleashed onto the catwalks, although her version is more streamlined and hits the floor.

Emily Blunt confirmed last month that she is expecting her second child with husband John Krasinski, and she showed off her blooming bump in a fitted baby pink Prada dress with silver beading, teamed with old Hollywood style waves and rosy make-up.

Arriving at the city's famous Dolby Theatre alongside the great and the good of Hollywood, the 33-year-old actress looked stunning as she subtly concealed her blossoming bump.

Best actor nominee Michael Fassbender looks as dapper as ever on the Oscars red carpet.

Charlize Theron is almost always a red carpet favorite, but at the 2016 Oscars, she just made a stunning appearance that will erase the memory of all her past looks.

Theron was all about the sex appeal in a very low-cut and slinky red gown.

A stunning crimson hue complimented by a plunging neckline and statement jewels.

The 'Mad Max' beauty did not wear a traditional complex ball gown that is par for the course at Hollywood's big nights.

Instead, she wore a simple but ultra-sexy Dior creation which skimmed her slim physique before flowing behind her with a mini train.

Her blonde locks provided the perfect contrast to the gown's hue, and the star wore her hair styled in a similar theme - simple - slicked back with one section fastened back with a soft wave.

Blanchett pretty much stole the spotlight on the 2016 Oscars red carpet. We just love how her seafoam dress complimented her fair skin and blonde locks, and that breathtaking train paired with pops of silver.

The Australian beauty also looked completely fresh-faced with nude lips and a light smokey eye. Her freshly chopped locks and minimal makeup truly brought the whole look together and complimented her fairytale dress so well.

Kerry Washington took a risk in a black and white Atelier Versace gown with a leather top and slit skirt.

On top, the dress featured a sleek, form-fitting black leather bodice that perfectly showcased her gorgeous curves before giving way to a sexy, floor-grazing white skirt. Between it’s curve-hugging silhouette and sexy, thigh-high slit, Kerry clearly pulled out at all of the stops with this look and we’re definitely not hating it.

While her dress may have veered towards the sleek and simple, Kerry made sure to add an extra dose of sparkle when it came to her accessories.

This year, the Scandal actress partnered with Harry Winston jewelers, who decked her out in vintage 1963 three row diamond hoop earrings and a 12.02 carat diamond platinum ring.

Our heart goes on...

While she was no nominated for any category, Witherspoon did look a bit too simple for the event.

This is the sixth Academy Award nomination for Leonardo DiCaprio who portrays Hugh Glass in 'The Revenant'.

A red carpet moment that might be the cutest of the night: Kate and Leo reunite!

Best actor hopeful DiCaprio poses with his 'Titanic' co-star Kate Winslet, who is up for Best Supporting Actress for her role in 'Steve Jobs'.

Kate Winslet is the ultimate style chameleon when it comes to playing a role - from 'Titanic' to her latest film, 'Steve Jobs'.

But when it comes to the red carpet, the actress is consistently on point.

The Oscar vet, who is no stranger to the Dolby Theater, walked the red carpet in a Ralph Lauren gown. The 40-year-old topped off her look with beachy waves and our personal favorite accessory — old friend Leonardo DiCaprio.

Leonardo poses with Kate Winslet on the red carpet.

Lady Gaga - a bit too white.

Nominated for Best Original Song, Gaga wore another creation by her stylist Brandon Maxwell - a white pantsuit with a train.

Lady Gaga has been continuing her love affair with classic Hollywood glamour on the red carpet once more with a wavy Marilyn-style long blonde bob and a white strapless jumpsuit and over skirt.

However, it was her Lorraine Schwartz diamonds that really kicked things up a notch, with her dangling earrings totaling an eye-watering $8 million in cost.

The emerald cut diamond drop earrings total 90 carats with the top portions being 30 carats and the bottoms 60.

The 'American Horror Story' actress showed off her impressive jewels with a soft wave that tucked behind her left ear.

Our all time favourite Julianne Moore in Chanel (Left) and Jennifer Garner in Atelier Versace.

We can't get enough of this stunner in white. Priyanka Chopra looks stunning everywhere she goes, so the Academy Awards was just another one of those times.

Priyanka's Oscar dress is beautiful and angelic and she complimented her look with a simple pony and no dramatic attempt for the make-up.

Eddie Redmayne, who is nominated for the second time in a row in the best actor category, went arm-in-arm with his lovely wife Hannah Bagshawe, who is expecting their first child together

Best Actress nominee Brie Larson went all out for the star-studded ceremony in a bright blue gown with dramatic ruffled skirt and train, which was nipped in at her tiny waist with a sparkling belt.

She has been nominated for her brilliant performance oin 'Room'.

A supermodel just made her way to the red carpet!

Heidi Klum opts for a multicolored, feminine dress to strutter down the red carpet.

'Newsroom's' Olivia Munn brightens up the red carpet in an orange, one-shoulder gown. 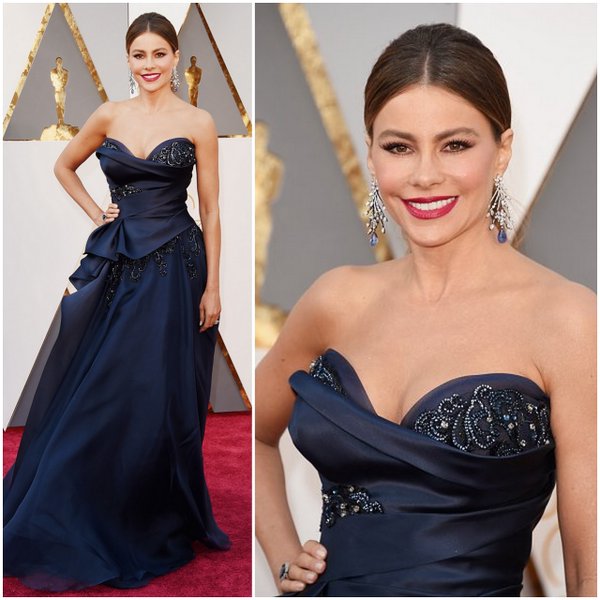 Priyanka Chopra is a vision in white on the red carpet

The 'Quantico' star, who will be presenting at the Oscars, is wearing a Zuhair Murad Couture for the 2016. 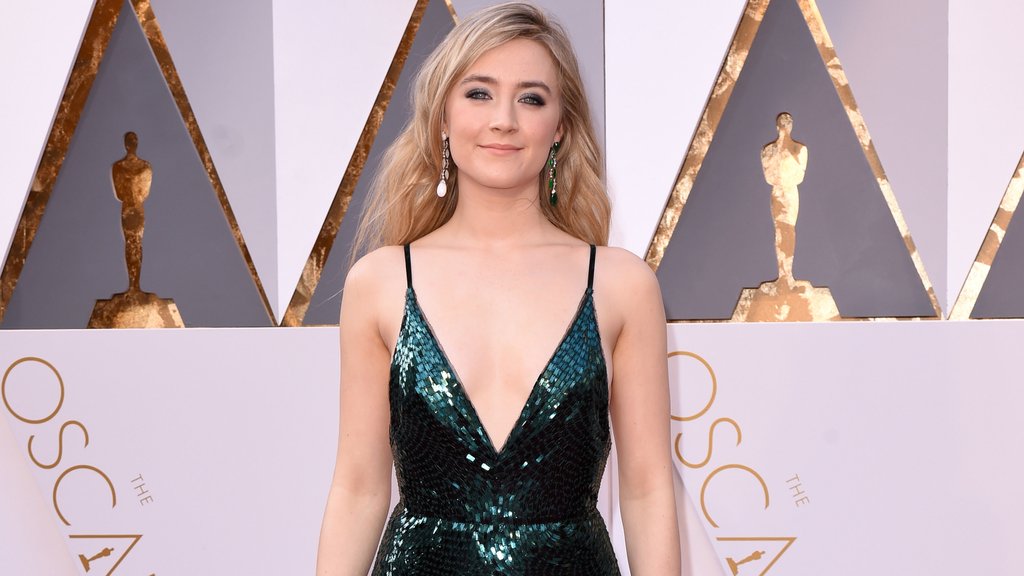 Saoirse Ronan is nominated in the best actress category for her performance in 'Brooklyn'.

The Academy is making up for the lack of 'colour' in their nominations with an extra glitzy golden stage.

The force is with 'Star Wars' actress Daisy Ridley at the Oscars red carpet.

Alicia Vikander, who is the frontrunner for Best Supporting Actress for her role in 'The Danish Girl', looked stunning in a yellow strapless Louis Vuitton gown with silver embellishment.

Sam Smith and Jimmy Napes, up for best original song for 'Spectre', has arrived at the Oscars

Mindy Kaling has arrived at the Oscars

Robin Roberts and Michael Strahan arrive on the red carpet.

A glimpse at the Oscars Red Carpet entrance.

Celebrities and fashion have long had a symbiotic relationship, from Audrey Hepburn and Hubert de Givenchy to Jennifer Lawrence and Christian Dior.

Since its inception in 1929, the ceremony has been a runway of spectacular fashion - daring cutouts, backless, strapless, layered in silk chiffon in bold red or classic black and the custom tailored suits.

The stars, as they glide down the red carpet, seem genetically-blessed with flawless beauty, oozing a style that looks effortless.

Getting the dress right can make a career - and choosing wrongly can kill a budding starlet's job prospects.

One dress designed specially by Prada for Lupita Nyong'o at the 2014 Oscars turned her into a fashion icon, opening the way to major advertising contracts.

The endorsement deals, the movie offers, grabbing eyeballs of millions of viewers and becoming a Twitter trend are just few of the perks of being the best dressed of the event.

On the other hand, a fashion faux pas can make you the laughing stock of online gossip forums.

The Cinderellas of the red carpet compliment their outfit with exclusive jewellery and are dressed by the world's best designers.

And the gentlemen of Hollywood who are always dapper - apologies for not swooning over your black suits.

The men somehow fail to make as much of a statement with their suits as actresses do with their annual parade of daring designer dresses.

For some viewers awards show fashion has more of an effect than the actual ceremony itself - and as far as Oscars is concerned it is the Olympics for the world of fashion.