British royals Prince Harry and Meghan Markle sent thank you cards to well wishers followers their wedding at St George's Chapel at Windsor Castle on May 19. 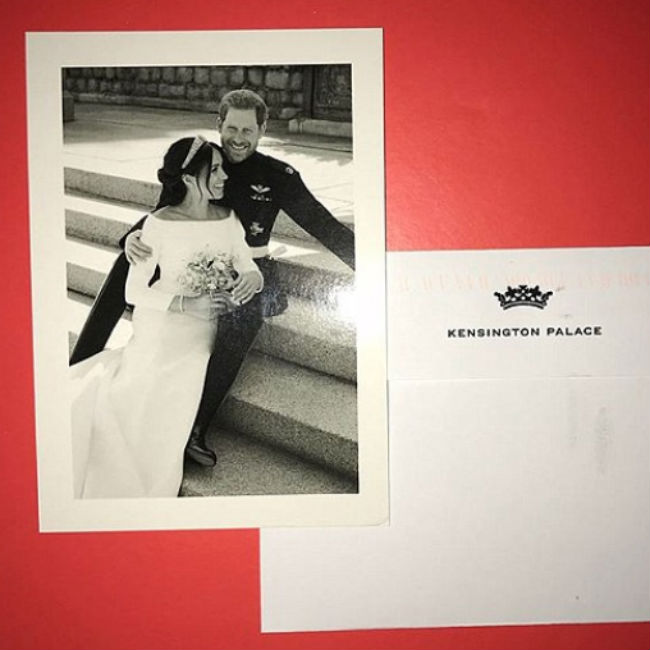 The loved-up couple tied the knot at St George's Chapel at Windsor Castle on May 19, and the royal fan Instagram account Letters Royal has now posted a photograph of the thank you cards sent by Kensington Palace.

The card - which has been sent to all of the couple's well wishers - features a candid black and white photograph of the Duke and Duchess of Sussex, which was taken by royal photographer Alexi Lubomirski.

The card also includes a message, which reads: "The Duke and Duchess of Sussex have been overwhelmed by all the incredibly kind cards and letters they have received on the occasion of their Wedding, and are so touched that you took the trouble to write as you did.

"It really was most thoughtful of you and greatly appreciated by Their Royal Highnesses who send you their very best wishes."

The photograph captures the 33-year-old Prince and the 36-year-old former 'Suits' actress in an intimate embrace while they sit together on a flight of stairs.

Alexi previously revealed that the romantic snap - which is markedly less formal than is traditionally the case for royal weddings - came about very naturally.

He shared: "It was just one of those magical moments, when you're a photographer and everything falls into place.

"The sun is setting right just over the top of Windsor Castle just behind them, it was just the most serene, beautiful light, they're in love, walking around this beautiful garden.

"I said just before you go in, let's sit down on these stairs, and she just slumped in between his legs. They were just laughing because they were joking about how they were exhausted and finally it was over."