Britain's Prince Harry weds US former actress Meghan Markle on Saturday in a pomp-filled ceremony at Windsor Castle, a globally-watched event overshadowed in the build-up by her fractious family's feuding.

Some 100,000 people are expected in Windsor, west of London, for the historic moment and street parties and afternoon teas are being held around the kingdom.

The service begins at noon (1100 GMT) in St George's Chapel with Harry's 92-year-old grandmother Queen Elizabeth II in attendance, alongside celebrities including Markle's former co-stars from the hit US television drama series "Suits".

The ceremony will be a traditional Church of England affair, but with unusual twists including a gospel choir singing "Stand By Me" and a lively US pastor delivering the address.

The Archbishop of Canterbury Justin Welby, who will marry the couple, said they were "very sensible" and "self-possessed".

"There's profound affection between them which is wonderful and a deep understanding and mutual support," he said.

"You see (it) in the way they respond to each other, caring for each other."

Markle will initially walk down the aisle alone, but will then be joined by her future father-in-law Prince Charles, who will accompany her after her own father dropped out through ill health.

Speculation has raged about her wedding dress, with the New York Post newspaper suggesting British designer Stella McCartney had been asked to make it, while others tipped Ralph and Russo.

Following the service, 33-year-old Harry and Markle, 36, will ride through Windsor in an open-top carriage.

Dozens of royal fans - many decked out in Union Jack paraphernalia - camped overnight for a front-row view.

Markle, a mixed-race divorcee from Los Angeles, is seen as a breath of fresh air for a royal family often seen as over-traditional. 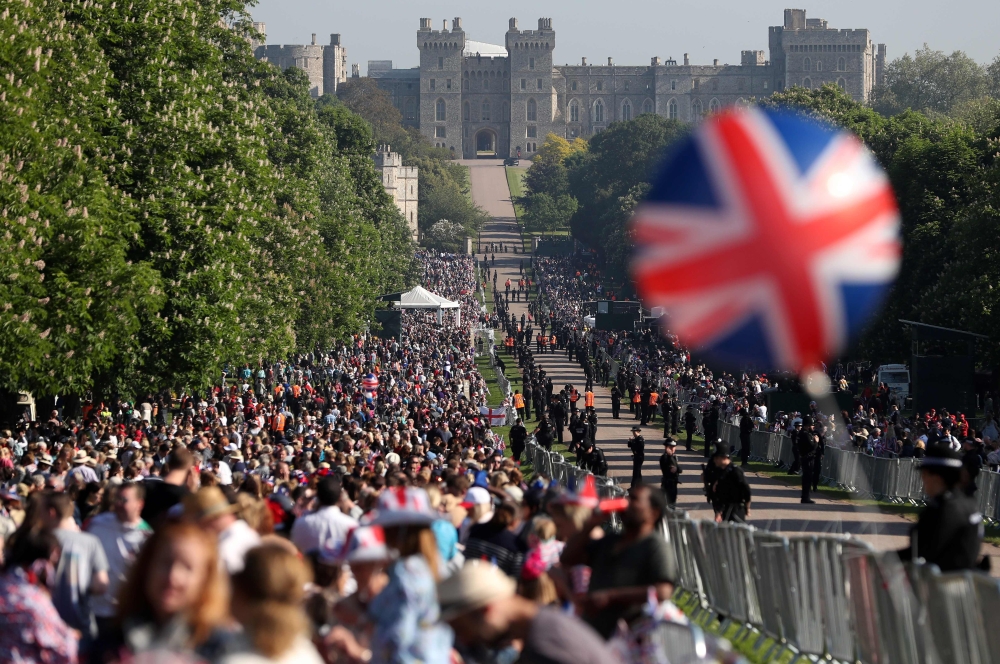 But her family's antics have risked stealing the show.

Her father Thomas Markle pulled out at the last minute after being caught up in a paparazzi scandal and undergoing an emergency heart operation in the days leading up to the wedding.

Markle's half-brother Thomas Markle Jr., who is not invited, has still travelled to Britain and given interviews to tabloid media, along with his ex-wife Tracy Dooley and son Tyler, a cannabis farmer.

The media circus around Markle's family has raised questions about the palace's preparations and risks further embittering Harry's tense relations with a press pack he blames for his mother Diana's death.

Harry and Markle met when she was passing through London in July 2016 and they were set up on a blind date by a mutual friend.

She was 34 and a divorcee of three years; he was 31 with a few foundered relationships and his 10-year army career recently behind him.

"All the stars were aligned. Everything was just perfect," Harry said when the couple announced their engagement in November 2017.

Harry proposed over a roast chicken dinner at his cottage in the grounds of Kensington Palace, where his mother lived after she and Charles divorced.

Harry was scarred by her death in a Paris car crash in 1997 when he was just 12, and he had to mourn in the full glare of the world's media.

He rebelled in his youth and spoke candidly last year about seeking help after coming "very close to a complete breakdown on numerous occasions".

She married producer Trevor Engelson in 2011 but the relationship collapsed in 2013 after she moved to Toronto to film the legal drama "Suits".

Markle biographer Andrew Morton has said Harry and Markle will be a "power couple" but some commentators have pointed out that she has had to give up her acting career, as well as her feminist causes.

Security was tight in Windsor ahead of the event, with police officers examining street lights, rubbish bins and manholes and using sniffer dogs to hunt for explosives.

The town has been inundated with tourists and some local residents have expressed frustration while shopkeepers have cashed in on the array of mugs, flags and Harry and Meghan masks for sale.

The event is a welcome respite for a country still burdened by austerity and deeply divided over Brexit.

Graham Smith, the chief executive of anti-monarchy group Republic, said the wedding was a showbiz sideshow.

"It's not a lot different from the international fascination with the Kardashians," he told AFP.

But a poll by Ipsos of 21,000 people in 28 countries registered wide international appeal.

In India, 54 percent of respondents said they were at least "fairly interested" in the wedding.

Even sceptical Britons can at least rest assured of a financial boon from the nuptials, with Brand Finance estimating a benefit to the economy of around £1.0 billion (1.1 billion euros, $1.3 billion).