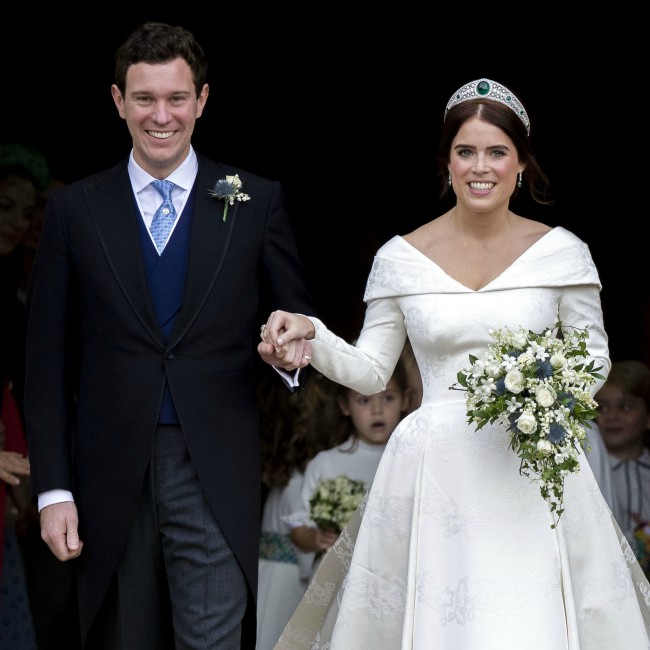 The 44-year-old singer and his wife Ayda Field, 39, were among the guests at the star-studded bash hosted by Eugenie's parents Prince Andrew and Sarah Ferguson in the grounds of the Royal Lodge at Windsor and Robbie delighted the crowd by jumping on stage to belt out his hits, according to MailOnline.

Model Kate Moss arrived with her daughter Lila Grace Moss Hack, whilst fellow models including Naomi Campbell, Cara and Poppy Delevingne, and Pixie Geldof were also in attendance at the event.

Musicians Ricky Martin, James Blunt and Ellie Goulding were spotted among the guests, as were comedians Jimmy Carr and Stephen Fry, as well as Stephen's husband Elliott Spencer.

Catherine, Duchess of Cambridge's sister Pippa Middleton arrived with her husband James Matthews, whilst football star Jamie Redknapp came to the ceremony on his own.

The wedding wasn't without some Hollywood glamour either, as actress Liv Tyler was in attendance, as was Demi Moore, who turned up with American florist Eric Buterbaugh.

Chelsy Davy and Cressida Bonas were also invited to the ceremony, which took place five months after Prince Harry - whom they both previously dated - tied the knot with his wife Meghan, Duchess of Sussex, in the same venue.

After a wedding breakfast at Windsor Castle following the ceremony at St George's Chapel, guests partied into the night at a fairground themed bash in the grounds of the Royal Lodge.