Priyanka Chopra Jonas has revealed she had a "panic attack" just before she walked down the aisle to marry Nick Jonas.

The 'Baywatch' actress tied the knot with pop star Nick Jonas during a three-day wedding last year, and she has revealed that she had a "freak out" when her 75-foot veil was being attached to her.

She told 'Good Morning America': "I kind of had a freak out moment right before I was supposed to walk down the aisle.

"I remember them putting the veil on me and the veil was like 75-feet, but I had a freak out moment when I was standing behind the curtains.

"They were going to tell me when to walk out and the music was going to start playing... I just started having a panic attack." 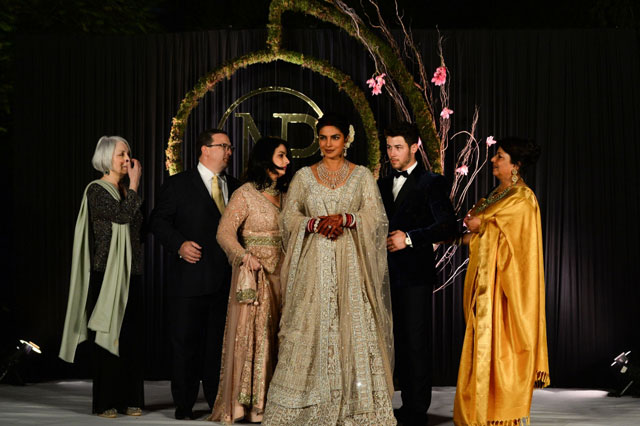 However, as soon as she caught a glimpse of the groom she was put at ease.

She added: "Then the doors opened and I saw [Nick] and I cannot forget that moment."

The 36-year-old star also opened up about how "different" it is being a wife.

"I didn't understand the gravity of that when I got married.

"But it's a good thing to be married to a good husband. That makes it easy."

Priyanka decided to add the former Jonas Brothers star's last name to her own because she doesn't want to "take away" her identity and instead "add" him to who she is.

She said: "The gravity of it, it's like a big deal! I didn't realise it was that much of a big deal until I did it ... No, I always wanted to add his name to mine because I feel like we're becoming family, and I'm a little traditional and old school like that. But I don't take away my identity. He gets added to who I am."

The high profile duo wanted their three ceremonies to be "super intimate", despite Indian weddings traditionally being much larger.

She shared: "One Indian ceremony, one western Christian ceremony, and one day of pre-rituals, which we have in the Hindu wedding. Usually Indian weddings are 1,000 people at least. We had only 200, which was mostly family because both of us have giant families. I think we just wanted to keep it super intimate."