Priyanka Chopra insists her wedding to Nick Jonas was very "conservative", despite the fact they had two ceremonies.

The 'Quantico' star had two weddings when she tied the knot with Nick Jonas last December but she insists for her culture, that is actually quite a conservative number.

Speaking on The Late Late Show, she said: "[We had] two weddings. One western Christian wedding and one Hindu wedding for our religions. Otherwise, we had pre-rituals. Indian pre-rituals can go on for like five days. Mine was just two. I was conservative!"

She shared: "One Indian ceremony, one western Christian ceremony, and one day of pre-rituals, which we have in the Hindu wedding. Usually Indian weddings are 1,000 people at least. We had only 200, which was mostly family because both of us have giant families." 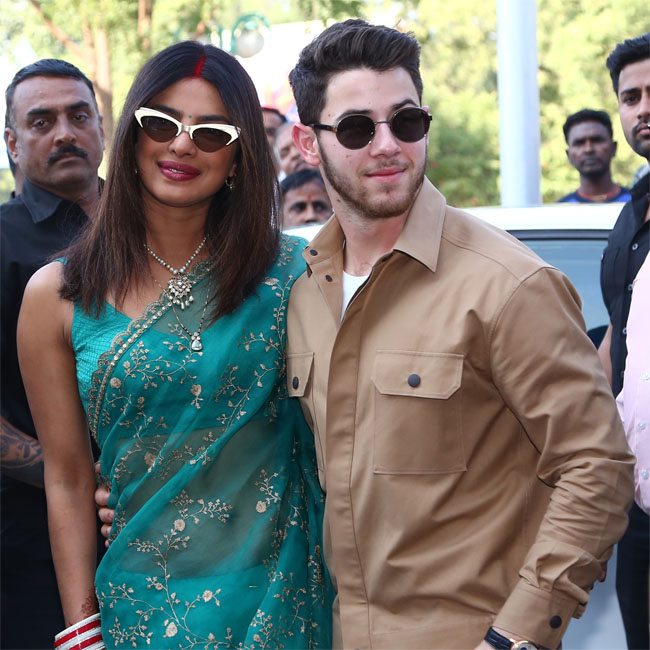 And asked why they didn't have more guests at their wedding, Priyanka added: "I think we just wanted to keep it super intimate.

And the 36-year-old actress previously admitted she never had a "plan" for how she wanted her wedding to look but it "melted [her] heart" when Nick suggested two ceremonies in India to celebrate their different backgrounds.

She explained: "Every girl dreams of being a princess on her wedding day. But I never had a plan about what I wanted it to be. It melted my heart. Being able to have two big weddings, in India, with our closest family and friends was unbelievably special."

And the couple are proud their wedding was a "religious mash-up" of "beautiful" traditions from their respective backgrounds.

She added: "I love that our wedding was a religious mash-up. We took beautiful traditions that we both grew up with and personalised them in a way that made sense for us. It's been incredible to find the commonalities between our beliefs and figuring out how to blend them in a respectful and meaningful way.

Priyanka Chopra not rushing into parenthood

Priyanka Chopra thinks she and Nick Jonas will start a family "in an organic way" and are currently too focused on their careers to have kids.

The 36-year-old actress wants to have children with her new husband eventually but they are not making any specific plans because they are currently focused on their wedding and feel it will happen for them one day.

Speaking to reporters at the premiere of 'Isn't It Romantic' in Los Angeles, the former 'Quantico' star said: "We both know that that's something that needs to happen, but it's not something I think about very much.

"We're both very driven, we love our work, we're married to our work, and we're both very supportive of each other's work. So I'm sure it will happen in an organic way."

Nick, 26, previously admitted he was keen to enjoy married life with his wife "for a while" before they thought about having children.

He said: "Let us be married first for a while before we have to make all these big decisions. We're in our honeymoon period right now and we will be for a very long time."

Meanwhile, the 'Baywatch' actress recently admitted she "always wanted" to add Nick's surname to her own in order to keep her own identity while also making a statement that they are now a "family" together.

She said: "The gravity of it, it's like a big deal! I didn't realise it was that much of a big deal until I did it ... No, I always wanted to add his name to mine because I feel like we're becoming family, and I'm a little traditional and old school like that. But I don't take away my identity. He gets added to who I am."

Priyanka Chopra and Nick Jonas will spend their first Valentine's Day as a married couple in London.

The 'Baywatch' actress has revealed she and the 'Jealous' hitmaker - who tied the knot with a three-day wedding in December - weren't initially going to be able to spend the most romantic day of the year together, due to their hectic working schedules, but she will now be joining her husband in the British capital for a couple of days whilst he's working there.

Priyanka told 'Extra': "I'm going to be in London, because Nick is going to be working in London so I am going in for two days to hang out."

The 36-year-old actress added that she doesn't believe in having one day to show how much you love someone, and gushed that the 26-year-old singer-and-actor is "thoughtful and sweet all the time".

She added: "I'm not a believer that you need a day to tell someone you love them, but it's always nice to hear it."

"We didn't put too much pressure on it."

"We're not supposed to be together this Valentine's Day because I was working in LA and he in London, but things moved so I am glad we can spend that time together ... The pressure does not exist - he's thoughtful and sweet all the time."

Meanwhile, the 'Quantico' star recently revealed she had a "panic attack" moments before she walked down the aisle.

Priyanka had a "freak out" when her 75-foot veil was being attached to her.

She recalled: "I kind of had a freak out moment right before I was supposed to walk down the aisle.

"I remember them putting the veil on me and the veil was like 75-feet, but I had a freak out moment when I was standing behind the curtains.

"They were going to tell me when to walk out and the music was going to start playing... I just started having a panic attack."

However, as soon as she caught a glimpse of the groom she was put at ease.

She added: "Then the doors opened and I saw Nick and I cannot forget that moment."

The 36-year-old star also opened up about how "different" it is being a wife.

"I didn't understand the gravity of that when I got married.

"But it's a good thing to be married to a good husband. That makes it easy."