Salman Khan shoots for 'Mental' and takes up modeling in Dubai

Bollywood actor Salman Khan, who was here in the emirates last weekend to support Mumbai Heroes during CCL, made an appearance at the Splash Fashion League in Dubai in support of the brand Splash.

The Celebrity Cricket League took place in the Dubai cricket stadium on February 23 but the party had started for the actor a day ahead.

Splash (and Iconic) is the sole distributors of Being Human merchandise in the region. The proceeds from sales go to the Being Human Foundation which works towards the upliftment of education and healthcare for the underprivileged.

The Actor flexed his star power at the Splash Spring/Summer 2013 fashion show, held at Madinat Arena in Dubai.

Splash Fashion League in Dubai saw forty-five models walking down the ramp which was designed like a track and field arena.

At the end of the show, Salman Khan walked the ramp to much applause. Accompanying Salman was the head honcho of Splash and Iconic, Raza Beig and Nisha Jagtiani. 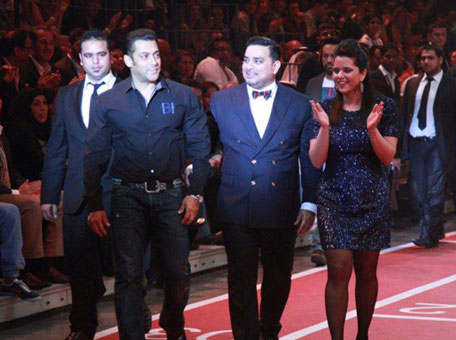 After some fashion and sports the actor returned to India for a brief period. But Salman is back in Dubai and this time it's going to be work for the beefy actor.

Salman along with actor Ashmit Patel, brother Sohail Khan and actress Tabu are here to shoot his next film 'Mental'.

They have completed their first schedule at a Belhasa Driving Institute. Emirates 24/7 has already reported that the film crew is scheduled to shoot over the weekend at the Wonderland Theme and Water Park in Al Garhoud.