The world’s biggest female artist added a new string to her bow this morning, presenting the weather on Channel 7’s Sunrise.

Katy Perry stepped up to the autocue and read the weather on Sunrise.

Appearing before hundreds of adoring Sydney fans, the pop star seemed happy to be put on the spot by presenters Sam Armytage and David Koch, confidently delivering today’s weather with only a couple of hilarious hiccups.

Pronouncing some of the city names wrong but the audience just adored her.

“20 degrees with a morning shower or two for Hogwarts,” Perry said, pointing to Hobart. Nation’s capital was pronounced “Coona-berra” and Cairns became “Carns”.

But the moment of truth came when Sam and Kochie sat Katy on the couch. 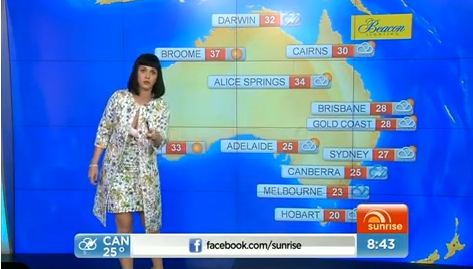 She was quizzed about her big kiss with Miley Cyrus last month.

Katy said when she got a mid-concert friendly kiss from Miley during her Bangerz tour stop in L.A. last month; she wasn't expecting so much intimacy!

"I just walked up to her to give her like a friendly girly kiss, you know, as girls do," Perry said, adding, "and then she like tried to move her head and I pulled away."

"God knows where that tongue has been," Perry joked. "We don't know! That tongue is so infamous!"

Channel 7 rolled out the red carpet as hundreds of screaming fans greeted Perry outside the network’s city HQ, her second day in Australia promoting her Prismatic world tour.

Perry took the time to take photos with the crowd before making her way inside.