Just one night out from Taylor Swift D-day spring 2019 - i.e., Thursday's release of a new single - Swift made an appearance Tuesday at the Time 100 event in New York, where she did not let loose with any spoiler performances of new music but did sing a few fan favorites, including "Style," "Delicate," and "Love Story."

Playing a five-song set for an intimate and exclusive dinner feting the hundred honorees including Dwayne Johnson and Gayle King, plus Nancy Pelosi and Jared Kushner, Swift had the room captivated during her entire performance, which also included "New Years Day" and "Shake It Off."

When she sat at the piano for "Shake It Off," Swift removed her high heels, later quipping, "You know when you don't think a plan through? I have to get back up and play my guitar now."

Reminiscing on when she wrote "Love Story" at just 17 years old - which was the first song she performed 10 years prior at her first TIME 100 Gala - Swift explained she would sit alone in her room and "would think about what love would be like and obviously overdramatize and romanticize it when I would write about it."

She also noted that she watched hours upon hours of "Grey's Anatomy" as a teen, and geeked out over a certain honoree in the room. "I know Sandra Oh is in the room, which shakes me to my very core. That's my whole life there."

The megastar gave an impromptu speech in the midst of her performance in which she said she believes she was selected for the TIME 100 list because of "the things she writes" - mostly songs.

"For me, writing, I've always known it was the main pillar holding up my career," said Swift, who took the stage in a floor-length, off-the-shoulder yellow and pink gown, with pink-dipped hair she'd earlier revealed in Easter photos on social media. "I've always looked at writing as sort of a protective armor, which is weird cause you'd think writing about your life, that's usually likened to vulnerability. But, I think that when you write about your life, it gives you the ability to process your life." 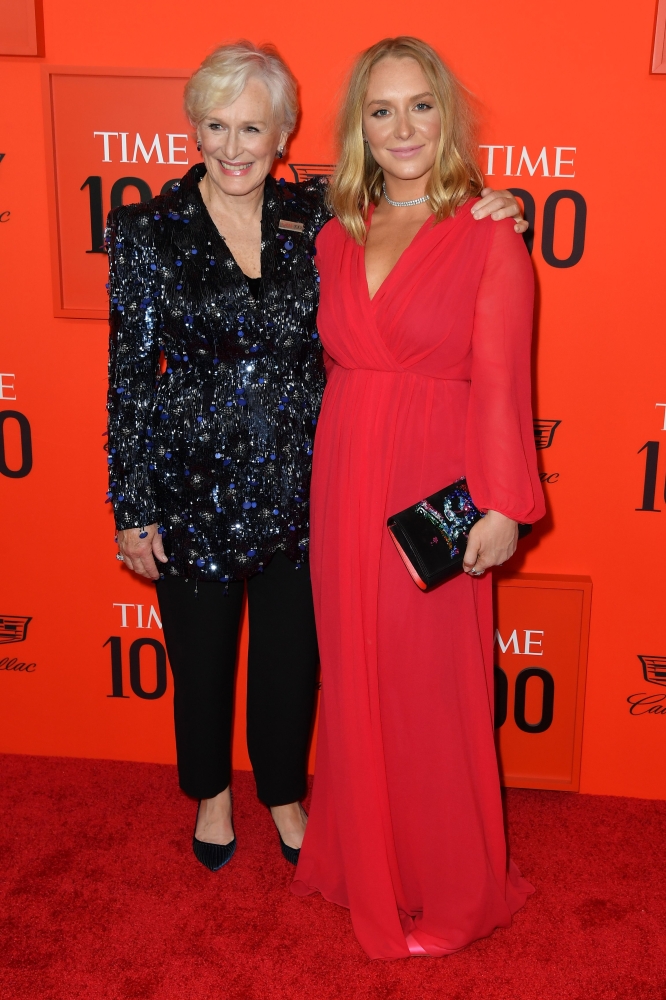 The event was to honor Time magazine's list of the 100 most influential people of the year, an accolade she shared with non-entertainers like Donald Trump, Pelosi, Brett Kavanaugh and Alexandria Ocasia-Cortez.

"I use [writing] as a way to justifying things that happen to me," Swift said. "Whether they're good or bad, I like the honor the good times and really process the bad times."

Before she performed, Swift made the rounds in the room, and was spotted chatting with "Captain Marvel" star Brie Larson. Another Oscar-winner was glimpsed enjoying Swift's singing: "Bohemian Rhapsody's" Rami Malek was dancing in his seat, alongside "Game of Thrones" alum Richard Madden and the Mother of Dragons, Emilia Clarke.

Swift's emphasis on how she values her writing provided nary a clue about the direction her new music will take when her first fresh material in two years goes up Thursday at midnight ET - though the color of her gown did match the aestheics of the trail of clues she's been laying out across social media. A countdown clock began on her website and social media exactly 13 days (13 being a lucky number in the Swift world) ahead of the release.

In contrast to the gothic snakiness that preceded the release of Swift's last new music in 2017, when she was in a more defensive mood, all the imagery she has put out in advance of this year's round of music has been warmer and friendlier, full of flowers, pastels and palm trees, suggesting a more determinedly sweet tone this time around.

Her online merch store was taken down prior to the new release, but she stepped out Monday in New York in a bright crop-top that appeared to be part of a forthcoming merch line emphasizing a literally rosier view of the world.