Prince William joked Duchess Catherine had "ruined" a painting when they met with an artist at the Global Ministerial Mental Health Summit on Tuesday.

The couple - who made their first joint public appearance since welcoming son Prince Louis into the world in April - were introduced to Dairo Vargas, who was painting 'Someone to Turn To', a piece inspired by the inaugural Global Ministerial Mental Health Summit and he asked the royals to contribute to the work.

William ushered his wife first and said: "My wife, she's the arty one!"

Catherine - an art history graduate - took the brush and asked: "Where can you hide it?"

After the artist pointed to one of the figure's shoulders, the duchess added a small stroke and asked: "Fine?"

William, 36, then quipped: "It's almost ruined the picture."

The prince was asked to add to the painting and said: "No, this is probably how you ruin a picture."

But encouraged by his wife, William added some paint near the bottom.

Catherine - who also has children Prince George, five, and three-year-old Princess Charlotte - then praised the artist for his work.

She said: "This is a great, great compliment. It's great to have some creative reason in which the same [mental health] conversations are going on."

The Colombian-born artist, who lives in London, later praised the "great" couple and was delighted they had got involved in his artwork, which represents the idea that mental health issues can stem from loneliness, but those who experience problems always have someone to turn to.

He said: "I had always rather hoped they might have a go but didn't know until the day that they would. I think I am going to leave their contributions untouched."

At the summit, which was held at London's County Hall, the royal couple also attended a session on children, young adults and the next generation.

William asked one attendee: "Have you noticed a shift in attitude in the last few years and months? Have you notice a general change, can you see this the shift? Are we slowly waking up to mental health?"

And his wife asked another: "What's the best was to access [help]? Is it online, apps?" 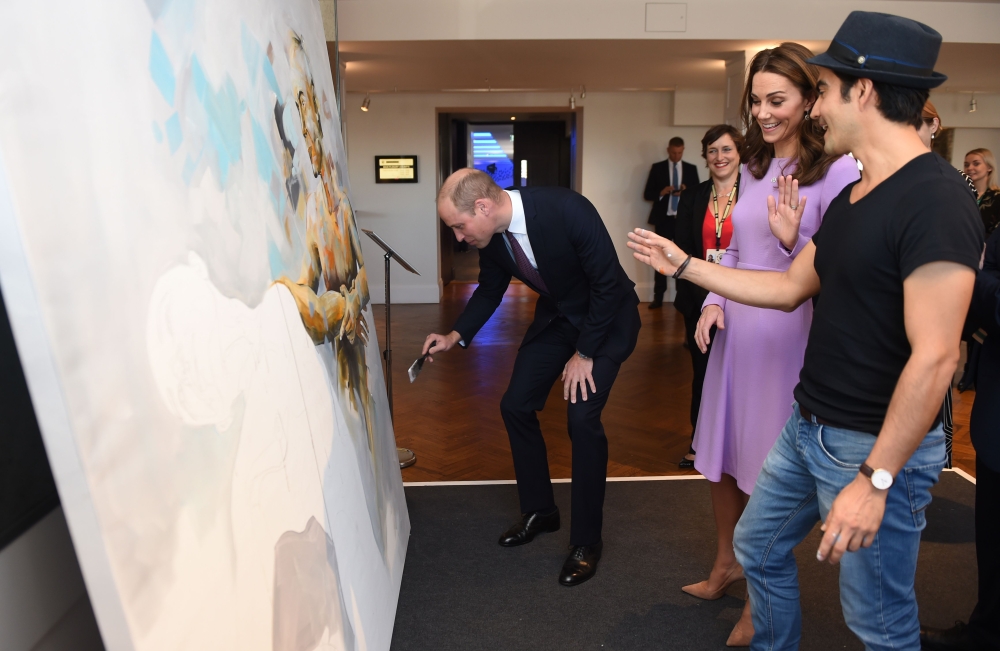 The royals also visited a stand run by United for Global Mental Health, where they were told about Dixon Chibanda, who started an initiative in Zimbabwe which has taught elderly women the skills to become lay health workers through the use of a "friendship bench".

William and Catherine then got the giggles as they posed for photographers on a friendship bench.