Celebrations have begun across the UAE after Dubai was voted winner of the World Expo 2020 bid at the 154th BIE General Assembly in Paris today. The UAE received 116 votes out of a total of 165.

It was a hard-fought victory; we were up against strong competitors, to whom we offer our full respect and sincere wishes," said the Dubai Expo 2020 team in a tweet.

Sheikh Ahmed bin Saeed Al Maktoum, Chairman of the Higher Committee on Hosting the World Expo 2020 in Dubai tweeted from Paris: I would like to congratulate #UAE President, @HHShkMohd & the people of #UAE on winning Expo 2020.

The World Expo 2020 will be held in Dubai under the theme ‘Connecting Minds, Creating the Future’, as announced by the Bureau International des Exhibitions (BIE) following voting by its member nations. It will be the first World Expo for the Middle East, North Africa and South Asia (Menasa) region, helping to unlock the vast potential of this area and creating significant opportunities for its more than two billion people.

“We are immensely proud to have been awarded the honour of hosting World Expo 2020 and thank the member states of the BIE for entrusting us with the spirit and values of the Expo. We will protect and be guided by them in delivering an exceptional Expo with a lasting legacy that will touch the lives of people across the globe for generations to come. The bid has been an incredible journey, led by the vision of His Highness Sheikh Mohammed bin Rashid, and we thank him for his faith in the Dubai Expo 2020 committee. The competition has been fierce and we respectfully commend our competitors. We also thank everyone, from across the nation, the region and beyond, who has supported Dubai Expo 2020 with unexpected and overwhelming enthusiasm.”

“This is a moment to be embraced and owned by the entire nation and beyond – this is your Expo. It is an Expo for the World. The vision of our bid has always been about more than just Dubai and the UAE. It has been about creating pportunity for the wider region and developing a truly global platform to find the innovative solutions required to address the future of Mobility, Sustainability and Opportunity, that impact all of our futures. Under the theme, 'Connecting Minds, Creating the Future', Dubai Expo 2020 will provide unprecedented opportunities for visitors, participants and for the member nations of the BIE.”

Earlier, Dubai had come first again in Round 2 of voting with 87 votes in its favour accounting for 52.73 per cent of the total votes cast.

Ekaterinburg had come in second with 24.85 per cent of the vote.

Izmir in Turkey was elminated after getting 21.82 per cent of the vote.

It was between Ekaterinburg and Dubai which will go head-to-head in the Final Round.

Earlier, the UAE ranked first in the first round of voting to select the host city for the World Expo 2020.

As soon as the first round resuts were announced, residents poured out onto the streets in an impromptu anticipatory celebration that erupted across the UAE.

That meant that Sao Paulo in Brazil, the fourth place candidate city, was the first to go out of the race.

Voting then began for the second round to select the host city from among the top three candidate cities - Duubai in UAE, Ekaterinburg in Russia and Izmir in Turkey.

Residents of the UAE and the wider Gulf are glued to their TVs, smartphones and computers following up the exciting finale of the UAE's bid for World Expo 2020.

Social media channels were alive with twitter and Facebook posts and news website such as Emirates 24|7 were swamped with readers wanting to know the minute-by-minute reportage as the voting went live at 5:30pm today.

The Dubai International Financial Centre and Burj KLhalifa Dowtown District were getting filled up by 6pm as a by-choice venue of Dubai residents gathering in anticipation of a positive vote.

Three members represent each candidate city during the Expo 2020 vote that is taking place behind closed doors.

Voting by 165 members started in Paris in presence of Reem Al Hashmi and 2 members of UAE delegation.

Candidate city with the least votes will be eliminated after each round, but if a candidate gets 2two-thirds of all votes at any round it wins.

The Bureau International des Expositions (BIE) is expected to announce the Expo 2020 host city at around 8:30pm UAE time.

The 165 member nations of the BIE will vote in less than 20 minutes to select the host city for World Expo 2020.

All four cities - Dubai, Sao Paulo and Ekaterinburg and Izmir - have completed their Expo 2020 presentations at the 154th BIE General Assembly. Voting will start at 17:30 Dubai Time.

Reem Al Hashimi: I stand before you representing millions… We are committed to bring about positive change in the future.

Reem Al Hashimi: Millions and millions of people in our region look to Dubai as a minaret worthy of hosting the Expo 2020.

Reem Al Hashimi: Dubai Expo 2020 will allocate a pavilion for every country.

Reem Al Hashemi: We strive to present an unforgettable experience for Expo 2020 guests.

Reem Al Hashimy: The world expo has inspired us and made us stronger.

"My generation has been inspired by our forefathers, they have entrusted us with a city that is capable of hosting the world": Reem Al Hashimi

Reem Al Hashimi: "I hope you have been touched by the spirit of our young country. We have pioneered the concept of one pavilion-one nation".

Reem Al Hashimi: "We will endeavor to give the world an exquisite and memorable Expo. We will give Expo 2020 the recognition it deserves."

Reem Al Hasmiy: "I am now delivering what is likely to be one of the most important speeches of my life"

The voting process is limited to 165 countries after excluding South Sudan, Chad and Costa Rica.

15-minute delay is expected in presenting the bidding files for the nominated countries.

OECD Conference of the 154 BIE General Assembly will start in less than half an hour.

Candidate city with the least votes will be eliminated after each round, but if a candidate gets 2/3 of all votes at any round it wins.

The conference hall where the final presentations will take place. (Supplied)


Dubai will be the first candidate city to present starting 1:30pm UAE time. 'Live' stream available from 1pm at http://www.expo2020dubai.ae

The excitement in the air is quite palpable. The buzz online is warming up to what should reach a viral crescendo by 8.30pm tonight.

A sense of unity, expectation and assured confidence has enveloped the United Arab Emirates (UAE).

Ahmed bin Saeed and members of the UAE delegation at the headquarters of the General Assembly of BIE. (Dubai Media Office)

The country’s bid to host the World Expo 2020 in Dubai will go to vote at 5.30pm, UAE time, this evening in Paris at the Bureau International des Expositions (BIE).

BIE is the intergovernmental organisation, representative of 154 nations, in charge of overseeing the calendar, the bidding, the selection, and the organisation of World and International Expos.

Any time after 8.30pm (UAE time), the results of the vote will be revealed.

The nation is geared to celebrate the resounding success of the UAE’s bid to host a global event in Dubai – paralleled only by the Olympics and the football World Cup in terms of sheer scale of organisation.

While rumours of an extra holiday tomorrow if the UAE wins fast gaining traction, the UAE team in Paris has already begun the hectic parleys and preparations for the final day presentation.

UAE Foreign Minister Sheikh Abdullah bin Zayed Al Nahyan and Sheikh Ahmed bin Saeed Al Maktoum, Chairman of the Higher Committee on Hosting the World Expo 2020 in Dubai have expressed their gratitude of the leadership, government and people of the UAE to the Arab ambassadors for their supportive stances to the UAE's bid to host the World Expo 2020 in Dubai under the theme ‘Connecting Minds, Creating the Future’. 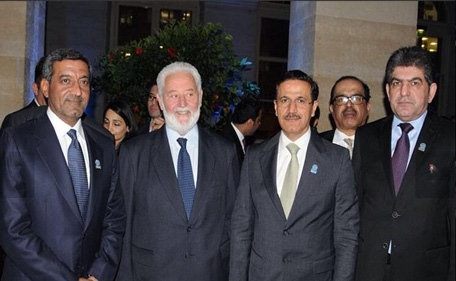 Not more than three rounds of voting are expected with Ekaterinburg in Russia, Izmir in Turkey and Sao Paulo in Brazil also in contention.

The hashtags #Expo2020 and  #DubaiExpo2020 are already topping the Twitter charts.

Why the bid matters

- Expo 2020 will provide a unique platform for the global community to come together and explore creative and pioneering solutions to the three subthemes which have been identified as key drivers of global development: Sustainability, Mobility and Opportunity.

- The total investment in the infrastructures related to Expo 2020 is estimated at Dh25 billion. Some of these facilities are permanent and will be utilised for other purposes after Expo 2020.

- Expo 2020 will enhance Dubai’s trade and support its tourism development strategy targeting 20 million tourists and tripling tourism contribution in the emirate’s economy by 2020.

- From the environmental aspects, the design of the exhibition centre is eco-friendly. Dubai Expo 2020 target to produce 50% of the Expo’s energy requirements on site