Amal Clooney reportedly changed her Met Gala outfit at the last minute and caused the designer to become "annoyed" at her decision. 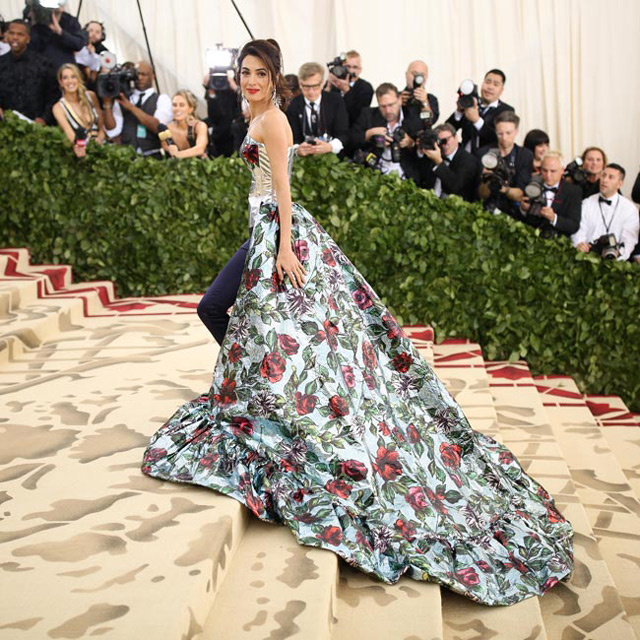 The 40-year-old human rights lawyer stunned on the red carpet in New York, wearing an extravagant tailored suit with a full skirt overlay by British designer Richard Quinn, but Amal has apparently angered the fashion house after she'd previously agreed to wear the custom design en route to the bash.

Tom Ford had created a hand-beaded, full-length, crimson red gown, which was intended to reflect the 'Heavenly Bodies: Fashion and the Catholic Imagination' theme.

But, after being shunned by Amal, the fashion house decided to save its creation for another occasion, when it will be worn by another celebrity.

A source told the New York Post's newspaper's Page Six column: "(Tom Ford) were annoyed, obviously, but they were gracious, and said it was fine to go with [another designer], but they would prefer that Amal not wear the dress at all if she wasn't going to wear it on the Met Ball red carpet."

However, after Vogue staff had reportedly encouraged Amal to stick to the original plan to avoid sabotaging designer relationships - especially as she is the Vogue cover star for May - Editor-in-chief Anna Wintour revealed she ignored Tom Ford's request to keep the dress for another event.

Instead, she decided to change into the outfit once inside the venue.

Anna shared': "She wore this incredible dress on the red carpet that was designed by a young British designer called Richard Quinn, but it was made of tin foil, so she was a little bit concerned it might rip during the evening.

"So she went into the gift shop and she changed into this extraordinary Tom Ford dress, which is designed to look like stained glass."