Cannes 2015: Aishwarya Rai has flab to work on; unveils 'Jazbaa'

Nevertheless, Aishwarya Rai Bachchan wore Oscar's maroon colour tiered dress in its full glory while giving a sneak-peek of her next movie. 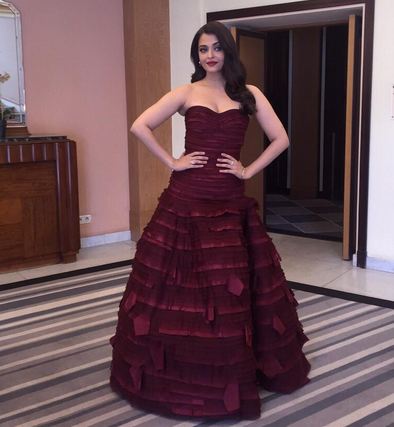 Aishwarya, whose comeback film this is, looked rather lovely with deep coloured lips and side-swept soft wavy hair.

With regard to accessories, she kept it simple with drop earrings and delicate rings with her usual gold single bangle.

Looks like she is on road to redemption after her first red carpet appearance in Ellie Saab did not impress all.

Her beauty is incomparable but the dress shows her underarm flabs - it's an awful sight.

We are not even mentioning the slight bulge on her waist but the flab swelling out of that dress is an eyesore.

And lets be honest, she needs to be more experimental with her hair. The same old side-swept hair is boring.

The actress, who is the ambassador of international cosmetic brand, L'Oreal Paris completes 14 years at the 68th Cannes Film Festival.

The first poster of 'Jazbaa' was released yesterday (May 19) while the trailer will be launched in Mumbai later.

'Jazbaa', in which she plays a lawyer, is her first film since 2010's 'Guzaarish' after which she went on maternity leave. The film also stars Shabana Azmi, Irrfan Khan and Anupam Kher.