In much of Europe and North America, September and October are peak months to get married. In Chile and elsewhere in Latin America, wedding guests are familiar with la hora loca, a wild late-night wedding party with masks, noisemakers and costumes.

More than two-thirds of U.S. couples still seek a parent blessing before tying the knot, compared to less than 10% in Italy and Spain, while Colombian weddings have the lowest guest count at an average of 91, as opposed to 524 in India.

Those are just a few of the insights in a report released Wednesday by the bridal site TheKnot.com and sister sites WeddingWire.com and the Spanish-language Bodas.net. The report is based on a survey of about 20,000 newlyweds in 14 countries: Argentina, Brazil, Canada, Chile, Colombia, France, India, Italy, Mexico, Peru, Portugal, Spain, the United Kingdom and the United States.

“One of the similarities that we saw across many countries was the strong desire to put a personal stamp on a wedding,” said Lauren Goodson, senior director of insights for parent company The Knot Worldwide. “We see that springing up from engagement all the way through to the ceremony, the reception and the honeymoon.”

While personalization is a strong trend, some longstanding traditions are common across the countries, she told The Associated Press ahead of the report’s release. An average of 78 percent of those surveyed took a honeymoon, for instance, though in parts of Latin America, couples tend to stay closer to home, Goodson said. 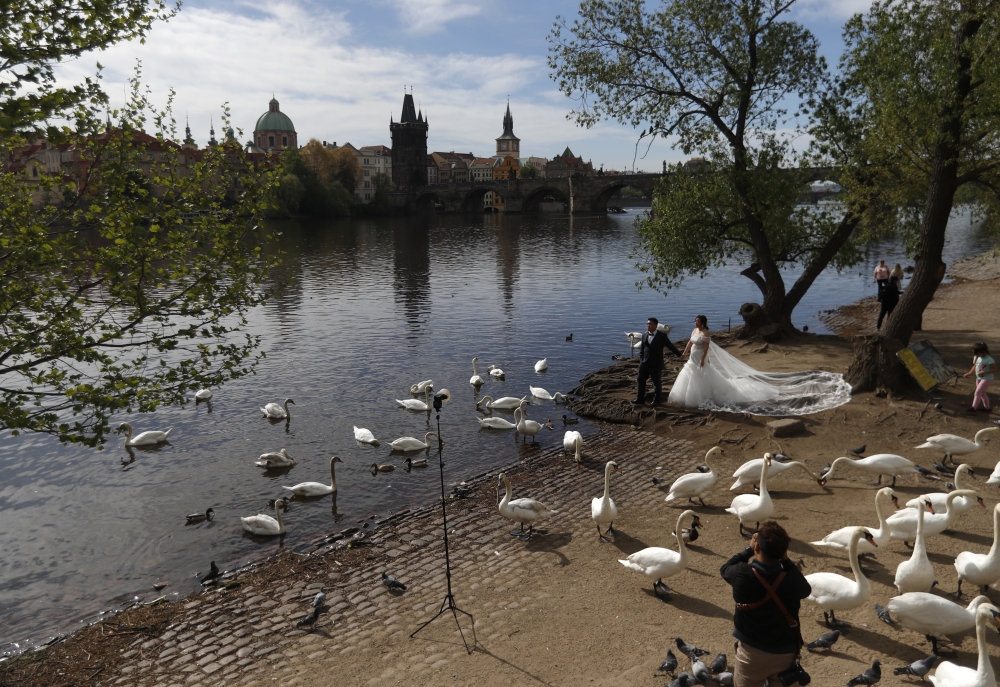 Wedding traditions vary widely by region in some parts of the world, including India, where a range of cultures have their own flavors, and auspicious and good luck dates are chosen for ceremonies. For Hindu weddings, for example, such dates are distributed in an annual calendar.

But other aspects of weddings offer more commonality, such as fall being a popular time to get married in the U.S., Spain, Portugal and elsewhere in Europe and North America due to mild weather. In Europe, extended summer vacations are common, making wedding planning difficult. December is the top month for engagements in all countries except India.

Timelines for planning weddings varied among respondents. Colombian couples had the shortest wedding planning period at seven months, followed by India and Chile at eight months. Goodson said countries where couples are less likely to live together before marriage tend to have shorter planning timelines. Respondents in the U.K. had the longest at 15 months.

As for bride attire, those in the Americas and Europe continue to embrace white dresses, with many personalizing their looks through non-traditional silhouettes and accessories. In the U.K., Meghan Markle wasn’t the only one to rock a tiara at her wedding: 22% of British brides wore one, Goodson said.

The traditional parent blessing before engagement isn’t necessarily widespread outside of the U.S., she said. It’s less common in Europe, where couples will make the decision to marry, then share the news with parents.

“Seeking parents’ permission ahead of time is one of the areas where we saw some of the biggest differences,” Goodson said.

In terms of wedding price tags, in Mexico it’s traditional to name a “padrinos” who serves as a type of sponsor for the engaged couple — often relatives, godparents or others with a special relationship to the couple, according to the report. It’s considered an honor to serve in the role but there are big responsibilities, such as contributing to the cost of the wedding or participating in the ceremony.

In Latin America overall, Goodson said, couples tend to cover a hefty portion of expenses. In Spain, parent contributions are much more substantial. In Peru, Chile and Colombia, couples pay about 55% of wedding costs, and a significant percentage take out loans or amass credit card debt to make it happen.

Countries where couples see more financial support from parents or other family members also include Italy, where they cover two-thirds of expenses, the report said.

The number of invited guests varies, with smaller receptions, including those driven by economic constraints. Some are influenced by other factors.

“It’s actually a pretty big honor to be invited to a Colombian wedding,” Goodson said. “It really says something to your connection to that couple.”

While receptions are as personalized as ever, great music keeps the party going until the wee hours in such countries as Chile and Peru, where a Latin American tradition of la hora loca, or “crazy hour,” is popular.

At one recent wedding in Santiago, Chile, a couple reported hiring gigantic LED robots to blast confetti in the air while guests danced under neon lights, according to the report. Some of those surveyed said they take on la hora loca themes, like the pair who decided on costumed characters from Super Mario Bros to entertain guests and hand out hats, beads and other wacky party favors.