Bidding stopped at a whopping 333.6 million yen for the enormous 278-kilogramme (612-pound) fish - an endangered species - that was caught off Japan's northern coast.

"I bought a good tuna," Kimura said after the auction. 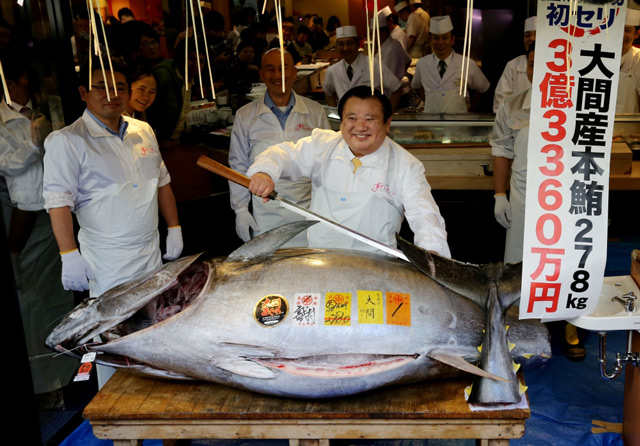 "The price was higher than originally thought, but I hope our customers will eat this excellent tuna."

Tsukiji - the world's biggest fish market and a popular tourist attraction in an area packed with restaurants and shops - moved in October to Toyosu, a former gas plant a bit further east.

Opened in 1935, Tsukiji was best known for its pre-dawn daily auctions of tuna, caught from all corners of the world, for use by everyone from top Michelin-star sushi chefs to ordinary grocery stores.

Especially at the first auction of the new year, wholesalers and sushi tycoons have been known to pay eye-watering prices for the biggest and best fish.

Despite the relocation, the auction ritual remained intact: before dawn, buyers in rubber boots were inspecting the quality of the giant fresh and frozen tunas by examining the neatly cut tail end with flashlights and rubbing slices between their fingers.

At 5:10 am, handbells rang to signal the auction was underway and the air filled with the sound of auctioneers yelling prices at buyers, who raised fingers to indicate interest.

"We have a lot of tuna here like we did in Tsukiji," he said. 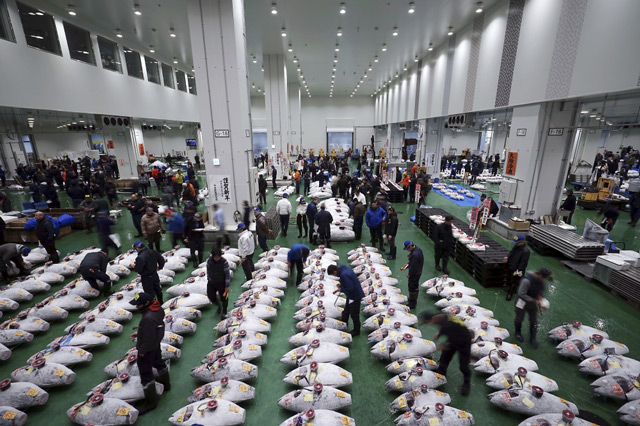 Tokyo governor Yuriko Koike said: "I sincerely hope this market will be loved by many people."

The relocation was a lengthy and controversial process.

Few would contest the fact that Tsukiji was past its prime, and there were concerns about outdated fire regulations and hygiene controls.

In contrast, the new market, located around two kilometres to the east at Toyosu, boasts state-of-the-art refrigeration facilities and is nearly twice as big again as Tsukiji.

But Toyosu is located on the site of a former gas plant and the soil was found to be contaminated, forcing local authorities to spend millions of dollars to clean it up and delaying the move.