Now, they'll be expecting something in return: faster, bolder action on long-promised reforms to transform the economy and improve the lives of India's 1.3 billion people. 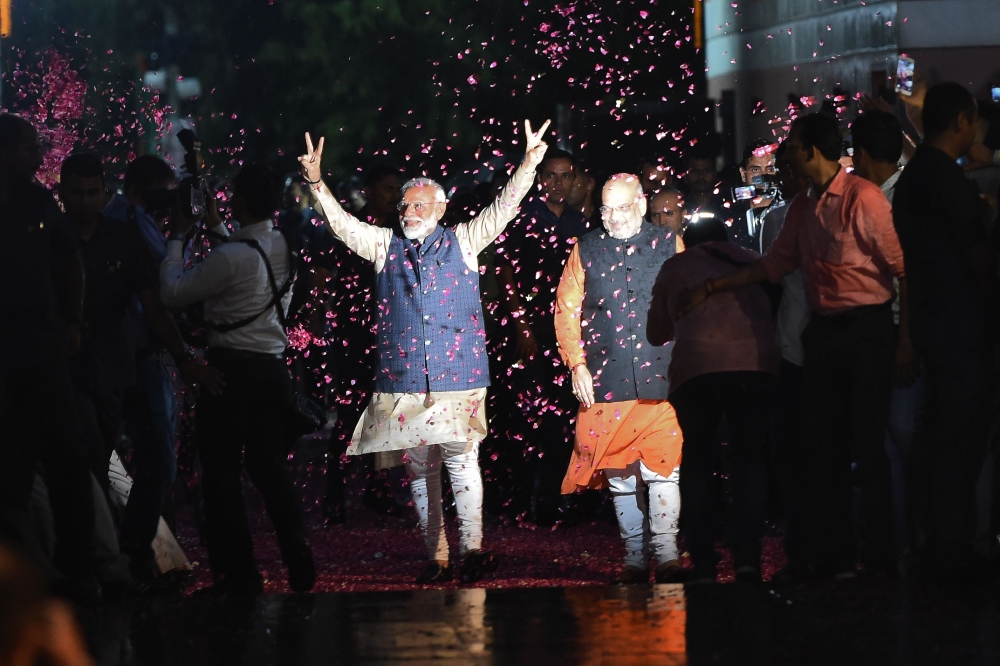 Modi made big promises ahead of the vote, viewed by many as a referendum on his first five-year term, which began in 2014. His election manifesto included pledges to double farmers' incomes and provide lavish aid to rural areas. He also vowed to make India the world's third-largest economy by 2030.

Such promises rang hollow for many unhappy with rising unemployment, slow progress in reforms and infrastructure construction and other initiatives that helped him win office in the first place.

The BJP's main rivals Congress were on just 49 seats, with Rahul Gandhi - the great-grandson, grandson and son of three premiers - in danger of a humiliating loss in the seat held by India's once-mighty political dynasty for generations.

"Together we grow. Together we prosper. Together we will build a strong and inclusive India. India wins yet again!," Modi tweeted as the outcome of the world's biggest election became clear.

The preliminary count predicts a commanding majority in the lower house for the BJP and its allies, who are on course for almost 50 additional seats.

They will still lack a majority in the upper house, however, putting a brake on Modi's legislative agenda.

"Today's mandate... shows that people of India have entirely uprooted casteism, nepotism and appeasement to choose nationalism and development," tweeted BJP president Amit Shah, in a swipe at Congress and Gandhi.

Celebrations broke out at BJP offices including in Mumbai where a few hundred party supporters and workers danced, played drums, chanted slogans and waved party flags.

At Congress headquarters in Delhi, a handful of dejected supporters sat in groups under the shade of trees.

"We are sad but we will rise again. Modi won because of his lies and false promises. The country is in danger now," Rajesh Tiwari, a Congress supporter, told AFP.

India's main Sensex index breached the 40,000-point level for the first time as the count pointed to a Modi win, following strong gains since Monday.

"Time for transformation of India. Time for deep reform. I dream of us as a global superpower in my lifetime," tweeted India's richest banker, Uday Kotak, as he congratulated Modi.

The Bombay Stock Exchange's Sensex index jumped more than two percent to pass the 40,000 mark for the first time ever while the Nifty crossed 12,000 points, also a new landmark.

After almost three hours of counting, figures from the Election Commission showed the BJP in the lead in 291 seats out of 542 with the rival Congress on just 51.

If confirmed - no results have been published yet - this would push the BJP over the 272 seats needed for a majority.

It could also beat its tally of 282 when Modi swept to power in the world's biggest democracy in 2014 with the first majority in 30 years.

The result would give the BJP and its allies, which early trends suggested would win close to 50 seats, a commanding majority of around 330 seats.

Indian stock markets have rallied since exit polls on Sunday pointed to a Modi triumph.