All 9 aboard rescue chopper crashed in Japan confirmed dead

All nine people aboard a Japanese search and rescue helicopter that crashed into the central mountains were confirmed dead Saturday, authorities said.

The Bell 412EP helicopter carrying seven local rescue workers from the Gunma prefecture and two from a flight service company lost contact about an hour after takeoff Friday and crashed.

A helicopter attends a rescue operation for crew members of a helicopter crash accident in Maebashi, Gunma prefecture. (AFP)

Prefectural officials said the last person aboard was retrieved Saturday and pronounced dead.

The helicopter was on a two-hour flight to monitor the opening of a mountain trail. The prefecture said it canceled Saturday’s event due to the accident. It wasn’t clear what caused the crash.

An investigation continued Saturday at the mountainside crash site, where debris of the helicopter was scattered and trees torn down apparently from the impact of the fall. 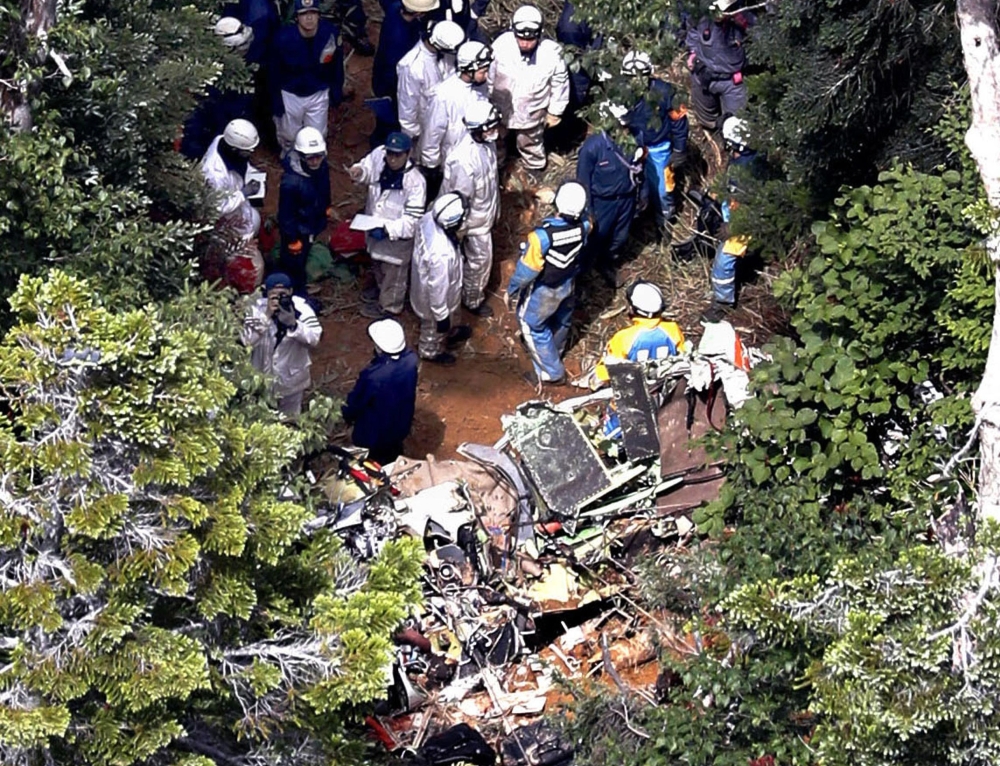 Prefectural officials said the helicopter, which was about 20 years old, had its engine repaired in April but had no abnormality since it resumed operations in June.

Helicopter with nine aboard crashes in central Japan

A rescue helicopter with nine people aboard crashed on Friday in a mountainous area in central Japan during a training flight, officials said.

Aerial footage broadcast on Japanese TV showed the wreckage of the crashed helicopter surrounded by trees in Gunma prefecture, northwest of Tokyo, and officers in navy uniforms examining the site.

"Eight people were found near the site, but we don't know their condition," a defence ministry official told AFP.

The Bell 412 helicopter left its base earlier Friday on a two-hour flight to observe climbing routes between Gunma and Nagano prefectures from the air, according to public broadcaster NHK.

But the helicopter did not return by its scheduled arrival time and lost contact with air traffic control, said Hiroshi Yoshida, a local official.

The defence ministry official confirmed that the crashed helicopter in Gunma was the one that went missing.

Helicopter accidents are not rare in Japan.

In February, two pilots were killed in a military helicopter crash in southern Japan. It went down seven minutes after takeoff, slamming into and setting on fire a house that was completely destroyed in the accident.

And last year, nine people aboard a helicopter were killed after it crashed during a mountain rescue drill.