Investigators on Friday returned to the skeletonized building where a man raging about theft set a fire that gutted an animation production studio, killed 33 people and crushed the hearts of comic fans in Japan and beyond.

Witness accounts and reports suggested the man had a grudge against Kyoto Animation, but police have not discussed the alleged motive of the suspect, a 41-year-old man who did not work for the studio.

The man told police that he set the fire "because (Kyoto Animation) stole novels," according to Japanese media, though it was not known if he had any contact with the studio.

The company founded in 1981 and better known as KyoAni made mega-hit anime series about high school girls and trained aspirants to the craft. The shocking attack drew an outpouring of grief for the dead and injured, most of them workers at the studio.

Construction worker Takumi Yoshida, 23, liked many of the studio's works. "I am shocked and I'm sure for their families it must be very difficult. So with those feelings in my mind, I brought flowers," Yoshida said.

Anime fan and university student Yuki Seki took a day trip to Kyoto after hearing the news. "After properly recovering while taking their time, I hope Kyoto Animation can once again share their power and energy with us."

On Thursday morning, about 70 employees were inside the three-story Kyoto Animation No. 1 studio in southern Kyoto, Japan's ancient capital.

The arsonist arrived carrying two containers with flammable liquid he was believed to have purchased on the way; shouting "You die!" he entered the studio's unlocked front door, dumped the liquid and set it on fire with a lighter, according to officials and media reports. Police have secured the gasoline tanks, as well as a knapsack containing knives, though it's not known if those items were the attacker's.

The blaze blocked the front door and quickly engulfed the workspace, rising up the stairs to the third floor, sending panicked employees fleeing, some crawling out the windows. The man fled, too, but was chased by studio employees who eventually caught him.

He collapsed to the ground outside a house and was quickly surrounded by police.

"They are always stealing. It's their fault," he told policemen bending over and asking him why he set the fire, according to a witness who described the scene outside her house. The man complained bitterly about something that had been stolen from him, the witness told NHK and other networks.

The suspect was considered a troublemaker by neighbors of the apartment believed to be his in Saitama, north of Tokyo.

A neighbor knocked on the man's door earlier this month to ask him to stop banging on the walls, but he was instead yelled at, "I will kill you," according to TBS network. The neighbor alleged the man pulled his hair and grabbed him by the chest.

Thirty-six people were injured in the fire, some critically. The suspect was also injured and remained hospitalized Friday.

Kyoto Animation's hits include "Lucky Star" of 2008, "K-On!" in 2011 and "Haruhi Suzumiya" in 2009. It has an upcoming feature film, "Violet Evergarden," about a woman who professionally writes letters for clients.

It's also done secondary animation work on a 1998 "Pokemon" feature that appeared in U.S. theaters and a "Winnie the Pooh" video.

Details emerged Friday of a horrifying inferno that tore through a Japanese animation firm and killed dozens, with people jumping out of the three-storey building and others trapped in a staircase unable to escape.

Eyewitnesses described a fire that was like "looking at hell," after a man apparently doused the production company office in the city of Kyoto with flammable liquid and set it alight.

Experts and firefighters said the blaze would have raged uncontrollably throughout the structure almost instantly, leaving the dozens of people inside with almost no chance of escape.

That was borne out by the grim toll: 33 dead, with dozens more injured, including several in critical condition.

The attack appeared to be among the worst violent crimes in decades in Japan, which has a famously low crime rate.

It sparked an outpouring of grief in Japan and beyond, as fans of the country's famed anime industry expressed horror at the enormous loss.

On Friday morning, people were arriving at the charred Kyoto Animation building to lay flowers and pay respects.

"These young people were the age of my grandchildren," 78-year-old Sachiko Konishi told AFP of those killed in the attack, most of whom are presumed to be young employees of the company.

"If my grandchildren died under circumstances like this, I wouldn't want to go on living."

Yasuko Tomita, 59, was offering prayers near the building, which was still cordoned off.

"I'm praying to help the souls of those killed find release," she said.

The toll in a suspected arson attack at an animation company in the Japanese city of Kyoto has risen to 33, a fire department official said Thursday.

The blaze also injured 36 people, 10 of whom were in serious condition, the official told AFP, adding that all those inside the building had now been accounted for.

A suspected arson attack on an animation production company in Japan killed 24 people and injured dozens more on Thursday, with flames gutting the building in the city of Kyoto.

Police said the fierce blaze appeared to have been started deliberately but there was no immediate information on a possible motive.

The toll continued to climb hours after the fire began, with fire department officials saying bodies were being discovered as they searched the ravaged building.

A fire department official told AFP that at least 11 more people had been found "in cardio-respiratory arrest," a term used in Japan to signify a victim's death before it is officially certified.

The discoveries, on the building's second floor and a stairwell leading to the roof, raised the toll to at least 24 dead.

Officials said 35 people had also been injured in the fire, 10 of whom were in serious condition, and local media said around 70 people were believed to have been in the building when the fire started.

Footage of the blaze showed thick white smoke pouring from the windows of the three-storey building. Its facade was charred black on much of one side where the flames had shot out of the windows.

"It's so dreadful that I'm lost for words," he wrote.

"I pray for those who passed away."

A suspected arson attack on an animation production company in Japan killed 13 people and injured dozens more on Thursday, with flames gutting the building in the city of Kyoto.

Police said the fierce blaze appeared to have been started deliberately but there was no immediate information on a possible motive.

There were fears the toll could rise further, with officials saying they believed several more people had failed to escape the fire.

"Twelve people were found in cardio-respiratory arrest on the ground and first floor," a fire department official told AFP, using a phrase commonly employed in Japan to signify victims have died but their deaths have not yet been officially certified.

Officials had already confirmed one death earlier in the blaze.

"Also, several other people appeared to have failed to escape on the second floor," he added.

Officials said 35 people had been injured in the fire, 10 of whom were in serious condition, and local media said around 70 people were believed to have been in the building when the fire started. 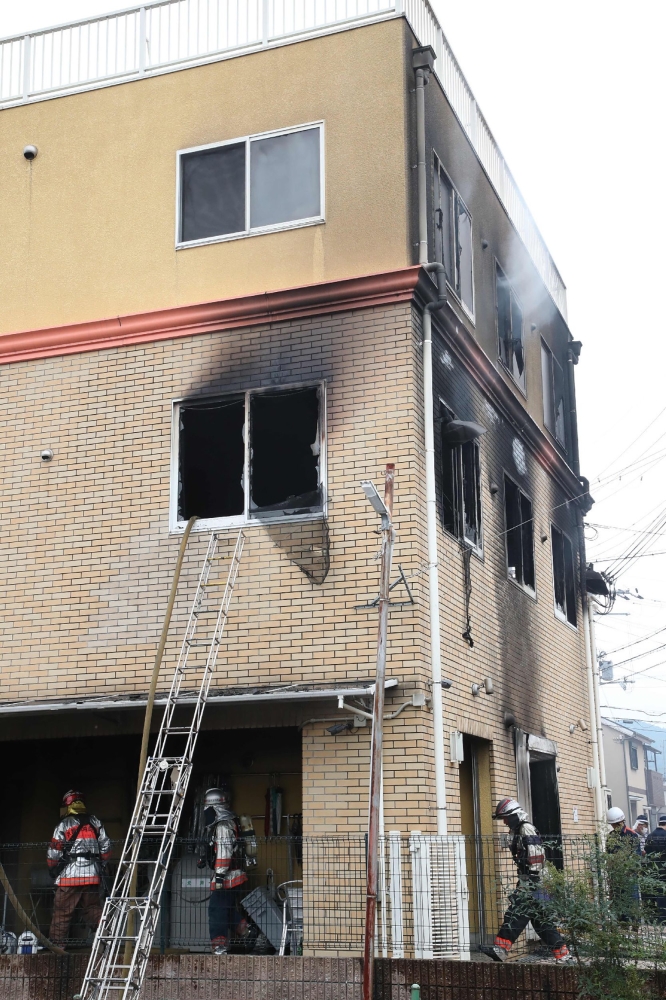 Footage of the blaze showed thick white smoke pouring from the windows of the three-storey building. Its facade was charred black on much of one side where the flames had shot out of the windows.

"Rescue operations are continuing, and we are trying to bring out several victims who are trapped inside... including ones who may not be able to move by themselves," a second fire department spokesman said.

"We can't immediately determine their condition," he said.