Two bomb blasts which brought carnage to the Boston marathon with three dead and more than 100 injured was being treated Tuesday as a "potential terrorist" attack.

The two explosions 13 seconds apart threw victims into the air as the famed race came to an end, tearing the limbs off some. An eight-year-old boy was reportedly among the dead.

As cities from New York to Los Angeles went on high alert, Americans with ever-vivid

Security was stepped up in major cities across the United States amid fears of a repeat of the September 11, 2001 attacks. President Barack Obama said those who planted the bombs will "feel the full weight of justice." 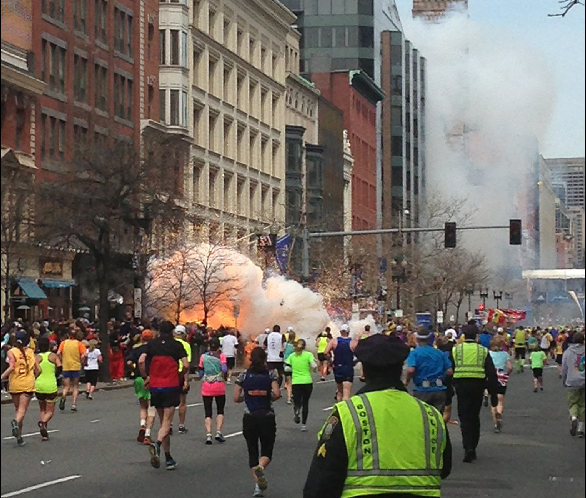 Obama went on national television to warn against "jumping to conclusions", but a senior White House official said such an attack was "clearly an act of terror."

Special agent Rick DesLauriers, who heads the FBI's Boston bureau, told reporters: "It is a criminal investigation that is a potential terrorist investigation."

More than 100 people were injured, Massachusetts governor Deval Patrick said, without giving an exact figure. The Boston Globe said more than 140 were hurt and that one of those killed at the scene was an eight-year-old boy.

Surgeons worked into the night on the wounded from the two powerful blasts, which were about 100 yards (metres) from each other.

Police and doctors quoted by US media said ball bearings had been packed into the bombs causing horrific injuries.

Some people had arms and legs torn off at the scene. Several victims had "traumatic amputations" at the race medical tent or in hospitals, said Alasdair Conn, head of emergency medicine at the city's Massachusetts General Hospital.

Five other hospitals were also used for the victims.

More than 27,000 runners were in the 26.2 mile (42 kilometer) race that is one of the world's most prestigious marathons. Tens of thousands of people were packed around the finish. Many of the runners had completed the race when the bombs erupted.

The blast and clouds of smoke tore through crowds on Boston's Boylston Street and blew out nearby shop windows. Streets around the bomb sites were kept closed as forensic experts moved in.

Video footage on American TV showed the detonation behind a row of national flags. One 78-year-old runner was blown to the ground and many bloodied spectators were pushed by the force of the blast through barriers onto the street.

Bill Iffrig, the runner who fell, said "the shockwave must have hit me. My legs felt like noodles." But he got up and walked away again and told his story to many US media.

But other witnesses near the bombs told how bodies had been piled up on top of each other.

"We saw people with their legs blown off," Mark Hagopian, owner of the Charlesmark Hotel, told AFP from the basement of a restaurant where he had sought shelter.

"A person next to me had his legs blown off at the knee -- he was still alive."

"It was very loud. You could feel the ground shake," added Dan Lamparello, another witness.

Boston authorities urged people not to congregate in large crowds and the area around the attacks was sealed off.

Police warned there would be heightened security around the city on Tuesday with random checks of backpacks and bags on buses and commuter trains. Many streets would also remain closed.

Governor Patrick said late Monday "the city of Boston is open and will be open tomorrow, but it will not be business as usual."

The twin explosions come more than a decade after nearly 3,000 people were killed in airplane strikes on New York, Washington and Pennsylvania on September 11, 2001.

Security was stepped up in New York and Washington -- both sites of 9/11 attacks -- as well as in Los Angeles and San Francisco.

New York police boosted security at hotels and other city landmarks. The Boston blasts rattled US markets, sending the Dow and the S&P 500 down at the close.

The national flag over the white dome of the US Capitol in Washington was lowered to half-mast in honor of the blast victims.

New York City police officers patrol outside the Barclays Center prior to a Brooklyn Nets basketball game on April 15, 2013 in the Brooklyn borough of New York City. Police say they have stepped up security following explosions at the Boston Marathon that resulted in two deaths and more than 100 injuries.  (Getty Images/AFP) 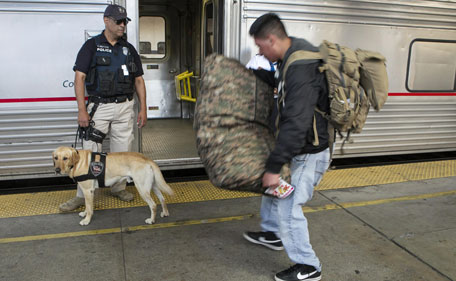 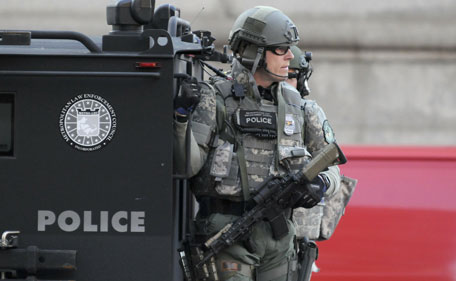 78-year-old runner knocked down by blasts 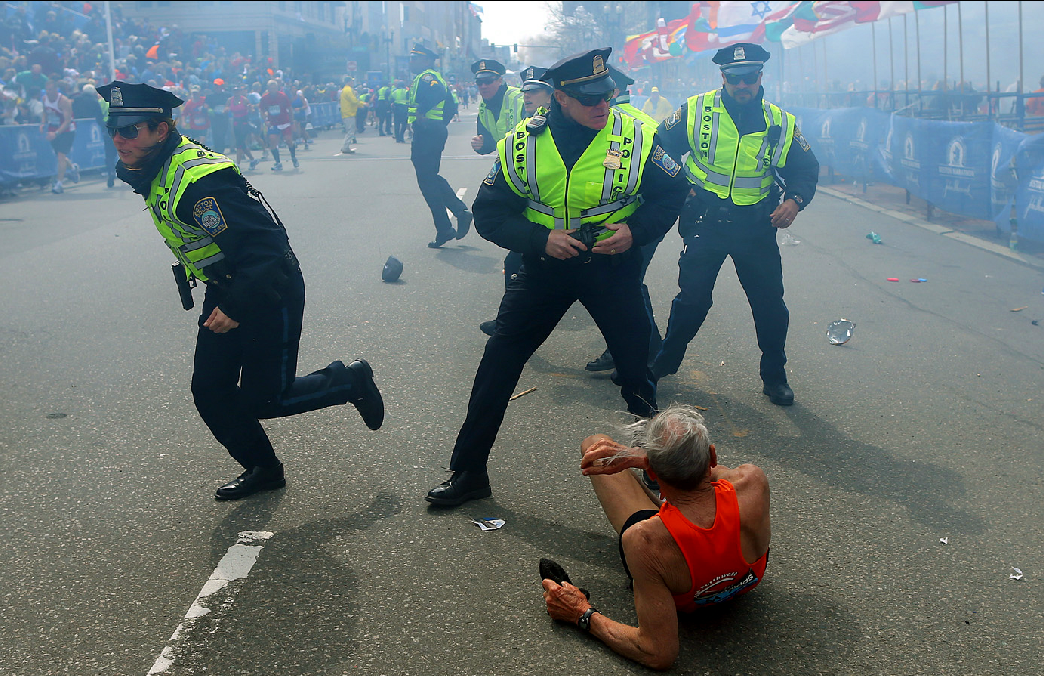