Brazil on Monday rejected aid from G7 countries to fight wildfires in the Amazon, with a top official telling French President Emmanuel Macron to take care of "his home and his colonies."

Nearly 80,000 forest fires have broken out in Brazil since the beginning of the year - just over half of them in the massive Amazon basin that regulates part of Earth's carbon cycle and climate.

G7 countries made the $20 million aid offer to fight the blazes at the Biarritz summit hosted by Macron, who insisted they should be discussed as a top priority. 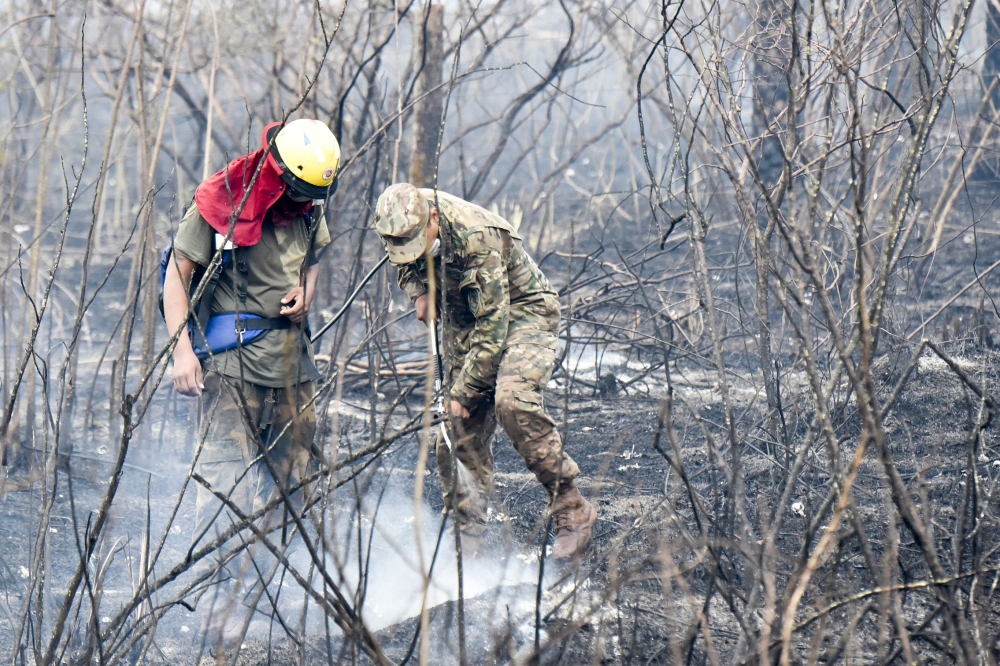 "We appreciate (the offer), but maybe those resources are more relevant to reforest Europe," Onyx Lorenzoni, chief of staff to President Jair Bolsonaro, told the G1 news website.

"Macron cannot even avoid a foreseeable fire in a church that is a world heritage site," he added, referring to the fire in April that devastated the Notre-Dame cathedral. "What does he intend to teach our country?"

The presidency later confirmed the comments to AFP.

Brazilian environment Minister Ricardo Salles had earlier told reporters they had welcomed the G7 funding to fight the fires that have swept across 950,000 hectares (2.3 million acres) and prompted the deployment of the army.

But after a meeting between Bolsonaro and his ministers, the Brazilian government changed course.

"Brazil is a democratic, free nation that never had colonialist and imperialist practices, as perhaps is the objective of the Frenchman Macron," Lorenzoni said.

Although about 60 percent of the Amazon is in Brazil, the vast forest also spreads over parts of eight other countries or territories, including the French overseas territory of Guiana on the continent's northeast coast.

Hundreds of new fires have flared up in the Brazilian part of the forest, data showed Monday, even as military aircraft dumped water over hard-hit areas.

Smoke choked Porto Velho city and forced the closure of the airport for nearly two hours as fires raged in the northwestern state of Rondonia where firefighting efforts are concentrated.

Bolsonaro - a climate-change skeptic - has faced criticism over his delayed response to the fires at home and thousands have taken to the streets in Brazil in recent days to denounce the destruction.

British Prime Minister Boris Johnson on Monday pledged £10 million ($12.3 million) to help restore the Amazon rainforest which has been ravaged by fires, sparking a wave of global concern.

The money would be made available immediately to help restore the habitat, including areas that have been hit by the fires, the British government said in a statement released at the G7 summit in the French resort of Biarritz.

The pledge came after French President Emmanuel Macron, who is hosting the summit, said Sunday that world leaders had agreed to help the countries affected by the wildfires as soon as possible. 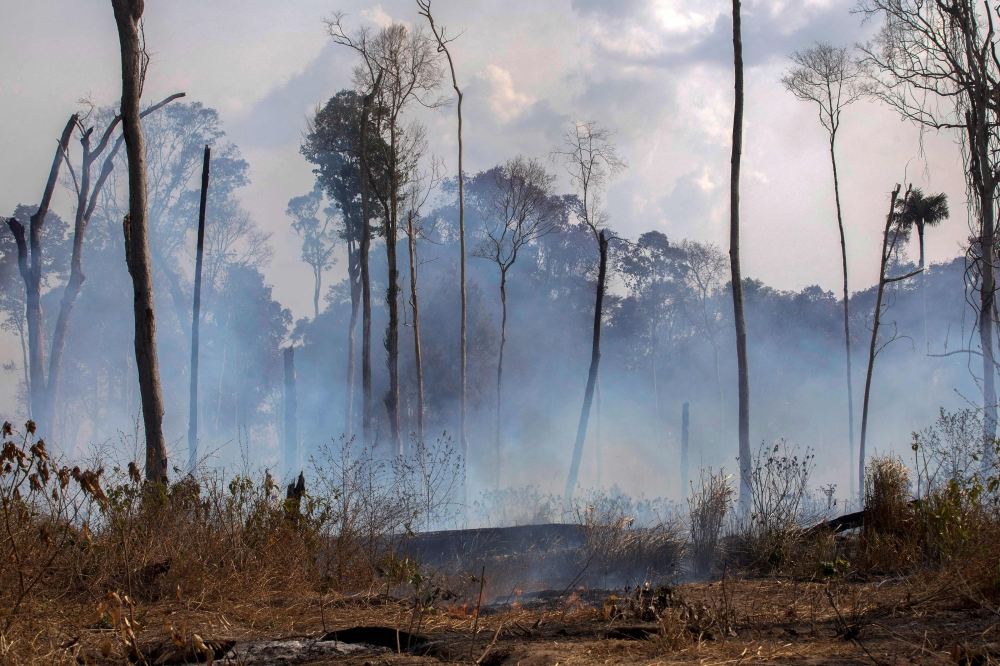 "In a week where we have all watched, horrified, as the Amazon rainforest burns before our eyes, we cannot escape the reality of the damage we are inflicting on the natural world," Johnson said in a statement.

Although about 60 percent of the Amazon is in Brazil, the vast forest also takes in parts Bolivia, Colombia, Ecuador, French Guiana, Guyana, Peru, Suriname and Venezuela.

Macron's bid to put the Amazon crisis high on the agenda at the G7 angered Brazil's far-right leader Jair Bolsonaro, who lashed out over what he sees as outside interference, denouncing the French leader's "colonialist mentality".

Johnson also said it was essential for the international community to tackle the key environmental issues of climate change and biodiversity loss.

"These are two sides of the same coin - it is impossible to solve one challenge without fixing the other," he said.

He confirmed Britain hopes to host the 2020 UN Climate Change Conference, known as COP26, which experts see as a critical moment in testing the commitments of governments to fight against global warming.

Johnson said the conference "will have as a major focus the solutions to climate change that can be found in nature - such as reforestation".

Hundreds of new fires in Brazil as outrage over Amazon grows

Hundreds of new fires are raging in the Amazon rainforest in Brazil, official data showed Saturday, as thousands of troops were made available to help fight the worst blazes in years following a global outcry.

Multiple fires billowing huge plumes of smoke into the air were seen across a vast area of the northwestern state of Rondonia on Friday when AFP journalists flew over the area.

Several residents in the capital, Porto Velho, told AFP on Saturday that what appeared to be light clouds hanging over the city of half a million people, was actually smoke from the blazes that had scorched swaths of land and left tree trunks smoldering on the ground.

"I have a daughter with respiratory problems and she suffers more because of the fires."

The fires in the world's largest rainforest have triggered a global uproar, and are a major topic of concern at the G7 meeting in Biarritz in southern France.

Official figures show 78,383 forest fires have been recorded in Brazil this year, the highest number of any year since 2013. Experts say the clearing of land during the monthslong dry season to make way for crops or grazing, has aggravated the problem.

More than half of the fires are in the massive Amazon basin, where more than 20 million people live. Some 1,663 new fires were ignited between Thursday and Friday, according to Brazil's National Institute for Space Research (INPE).

The new data came a day after Bolsonaro authorized deployment of the military to fight the fires and crack down on criminal activity. 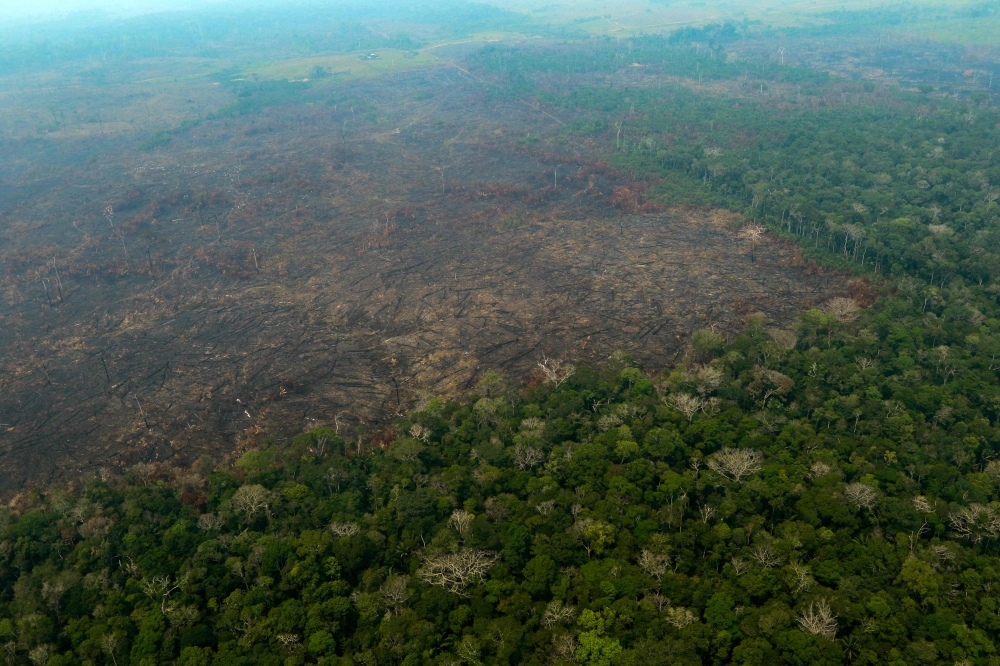 Seven states, including Rondonia, have requested the army's help in the Amazon, where more than 43,000 troops are based and available to combat fires, officials said. Firefighters and planes are also being deployed.

Six aircraft, including two Hercules C-130s equipped to carry 12,000 liters (3,170 gallons) of water each, have been sent to Rondonia to fight the fires. They are expected to be joined by 30 firefighters on Sunday.