Kneeling in front of her King, Suthida Vajiralongkorn na Ayudhya was invested as Queen on Saturday in Bangkok's Grand Palace, taking up a prominent role in a country where the monarchy is deeply revered, a fairytale ascent for the former flight attendant.

Wearing a pink traditional dress, Suthida took her seat next to King Maha Vajiralongkorn in the throne hall after he poured a few drops of sacred water on her forehead and handed over insignia according her status as queen.

The newest member of the royal family is the fourth wife of 66-year-old Vajiralongkorn, a deeply private monarch who spends a lot of his time abroad in Germany. He has a 14-year-old son from his third marriage and six other children.

King Maha Vajiralongkorn's coronation Saturday came just three days after a stunning palace announcement that the pair had married bestowing Suthida with the title of Queen.

But not much is known about his long-time consort-turned-queen, who faces a new and protocol-filled life in the wealthy and venerated Thai monarchy.

Broad biographical details such as her work as a flight attendant and her education at an upper-crust institution have emerged in Thai media. But the palace has so far declined requests for more information.

Suthida does not have the same royal lineage as Vajiralongkorn's mother Queen Sirikit, who is the great-granddaughter of the Chakri dynasty's fifth king.

She has "really come from the people", said Sophie Boisseau du Rocher, Thailand specialist at the French Institute of International Relations (IFRI).

Harsh lese-majeste laws mean unguarded discussion about the monarchy inside the country is dangerous and can result in a prison term of up to 15 years per count.

Thailand's normally effusive social media have been subdued in reaction to the royal news. 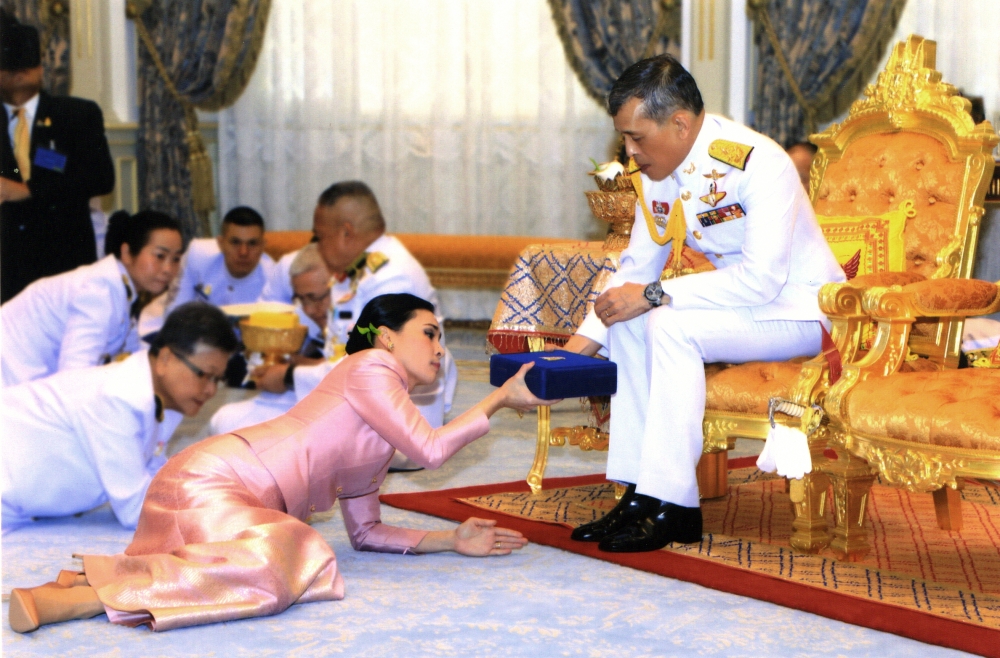 On Friday, she accompanied her husband to the sacred Temple of the Emerald Buddha in the heart of the Grand Palace.

Born on June 3, 1978, she graduated with a Communication Arts degree in 2000 from the Catholic-run Assumption University of Thailand.

She then worked as a flight attendant for national carrier Thai Airways.

According to a local media report she met the future king, a keen aviator with a pilot's licence, when he flew the company's aircraft during a charity event in 2007.

In November 2013, Suthida entered the royal army before becoming part of the monarch's prestigious security detail less than a year later.

She was promoted to the rank of general in December 2016 two months after the death of revered former King Bhumibol Adulyadej as Vajiralongkorn took to the throne.

Less than a year later, in 2017, she was made deputy commander of the king's Royal Guard, often seen shadowing the monarch at public events.

One of her latest appearances was in April, when she sat stone-faced behind her future husband wearing a white uniform with a black tie and epaulettes as he addressed police.

The couple would often travel to Bavaria in southern Germany, where Vajiralongkorn has several residences.

The king's marriage to Suthida is a "way of further legitimising" his reign, said Paul Chambers, political analyst at Thailand's Naresuan University.

"A king is supposed to have a queen and now he has one."

Thai King Maha Vajiralongkorn was crowned Saturday with a golden-tiered headpiece, the highlight of an elaborate three-day coronation ceremony two years after he ascended the throne.

The 66-year-old monarch, known as Rama X and dressed in a bejewelled golden robe, was handed the 7.3-kilogram Crown of Victory, which he placed on his head before issuing his first royal command.

The official coronation of Thailand’s King Maha Vajiralongkorn, who is also known as Rama X, involves months of rituals that will culminate in three days of elaborate pageantry, including a parade and an appearance by the monarch on a balcony of the Grand Palace. The final event will be a royal barge procession in October.

The last coronation, of Vajiralongkorn’s late father King Bhumibol Adulyadej, was on May 5, 1950 . Bhumibol died in 2016 at age 88 after reigning for seven decades. 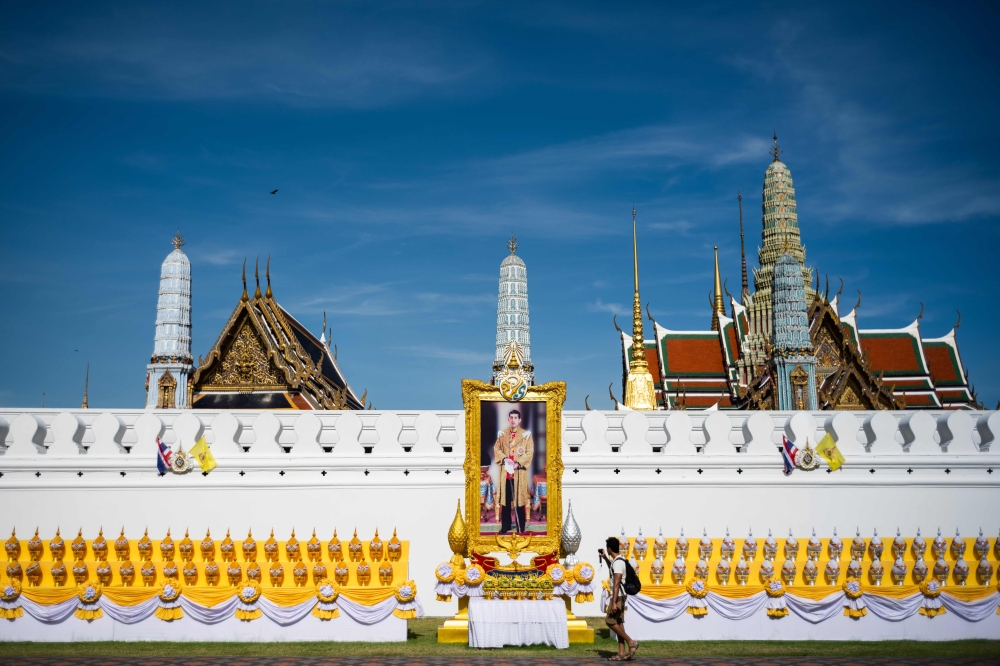 PRELIMINARY RITUALS: Preparations for the royal coronation began in April with the collection and blessings of water from across Thailand to be used in this weekend’s ceremonies. Prayers by monks at the Temple of the Emerald Buddha preceded the inscriptions of royal golden plaques and the Royal Seal of State, according to a schedule released by the Thai government. The king also has paid his respects to earlier monarchs, Rama I and Rama V, at statues and memorials in Bangkok, and worshipped “sacred beings” at locations within the palace.

MAY 4, SATURDAY, CORONATION DAY: In a royal purification ceremony at the Grand Palace , holy water is poured over the king’s head. An anointment ceremony with more consecrated water follows. He then ascends the royal throne and sits beneath the royal 9-tiered umbrella, used only by the king, to receive the royal golden plaque, royal regalia and weapons of sovereignty, among other symbols of the monarchy, from the chief Brahmin — a dignitary whose role reflects the influence of Hinduism on Thai’s monarchy.

The king later receives members of the royal family, the Privy Council and Cabinet, among other senior officials, who will pay their respects in the Throne Hall. Afterward he will visit the Temple of the Emerald Buddha to announce he is the royal defender of Buddhism. The day’s events end with a ceremony of the Assumption of the Royal Residence, a symbolic palace housewarming. 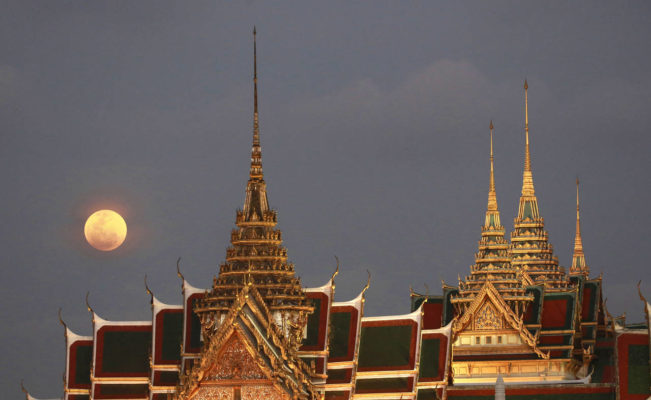 MAY 5, SUNDAY: The day begins with a ceremony in the Throne Hall where the king grants royal titles to members of the royal family. It ends with a 7-kilometer (4.3-mile) royal procession involving 343 men, some of them carrying the king through old Bangkok in an ornately decorated palanquin, allowing Thais to pay homage to their new king. A light and sound show and a display by drones are planned for the evening. Free food and public transport are provided for spectators. 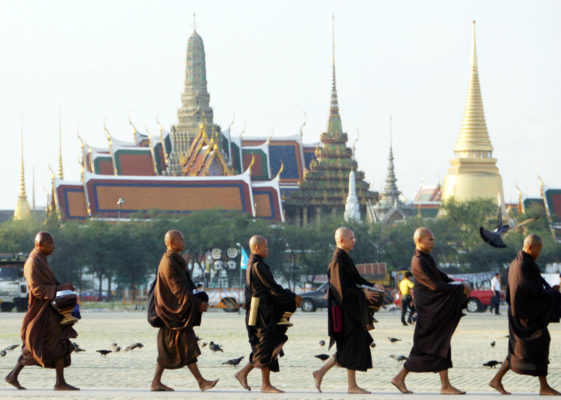 MAY 6, MONDAY: The king greets the public from the balcony of the Grand Palace in the late afternoon and then holds a reception for the diplomatic corps. 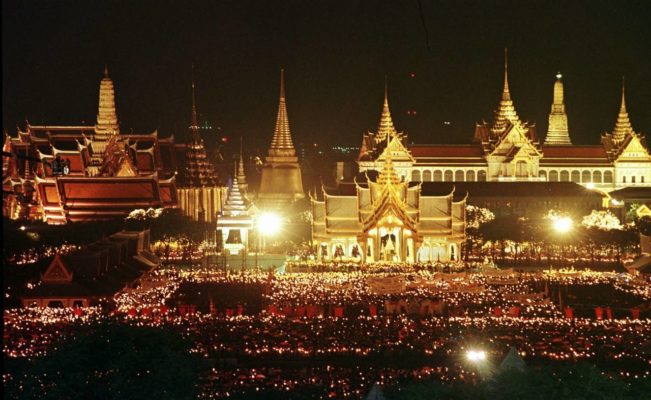 OCTOBER 2019: In the final rite of the coronation, about 2,300 oarsmen, paddling to rhythmic barge-rowing songs, will convey the king on one of 50 ornate royal barges to present robes to Buddhist monks at Wat Arun (the Temple of Dawn), one of the most famous of many temples along Bangkok’s Chao Phraya River.