Tens of thousands of tourists and locals gaped skyward Tuesday as a rare total eclipse of the sun began to darken the heavens over northern Chile. 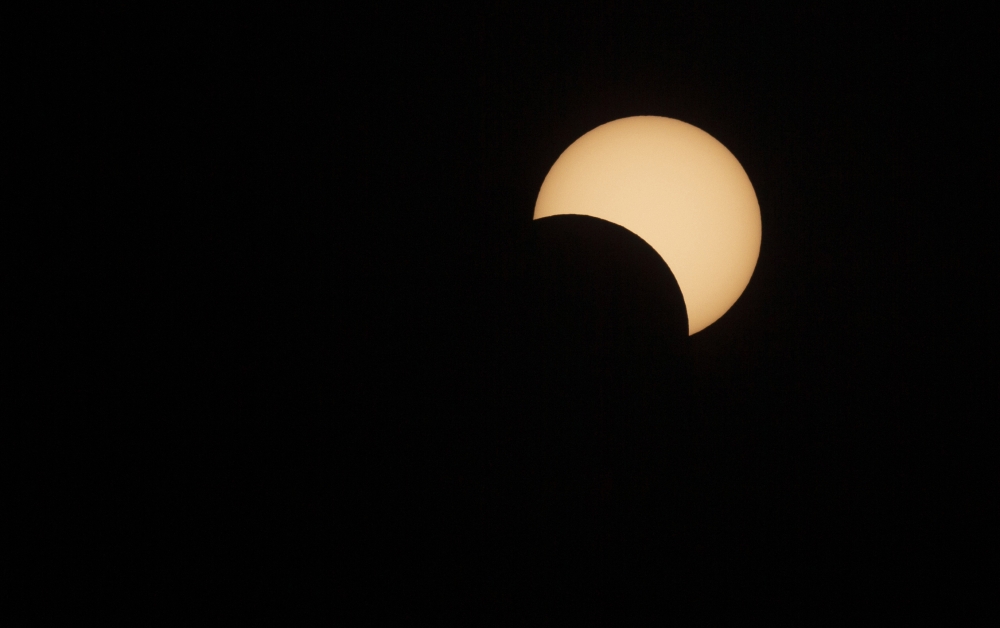 Tourists from around the world gathered to witness the cosmic spectacle, which began at 10:24 a.m. local time (1824 GMT), crossing over a tiny atoll in the South Pacific. Chile and Argentina are the only places that the total eclipse will be seen aside from the uninhabited island.

The eclipse made its first landfall in Chile at 3:22 p.m. (1922 GMT) in La Serena, a city of some 200,000 people where the arrival of more than 300,000 visitors forced the local water company to increase output and service gas stations to store extra fuel. Police and health services were also reinforced.

The total eclipse will begin there at 4:38 p.m. and last about 2½ minutes.

Northern Chile is known for clear skies and some of the largest, most powerful telescopes on Earth are being built in the area, turning the South American country into a global astronomy hub. 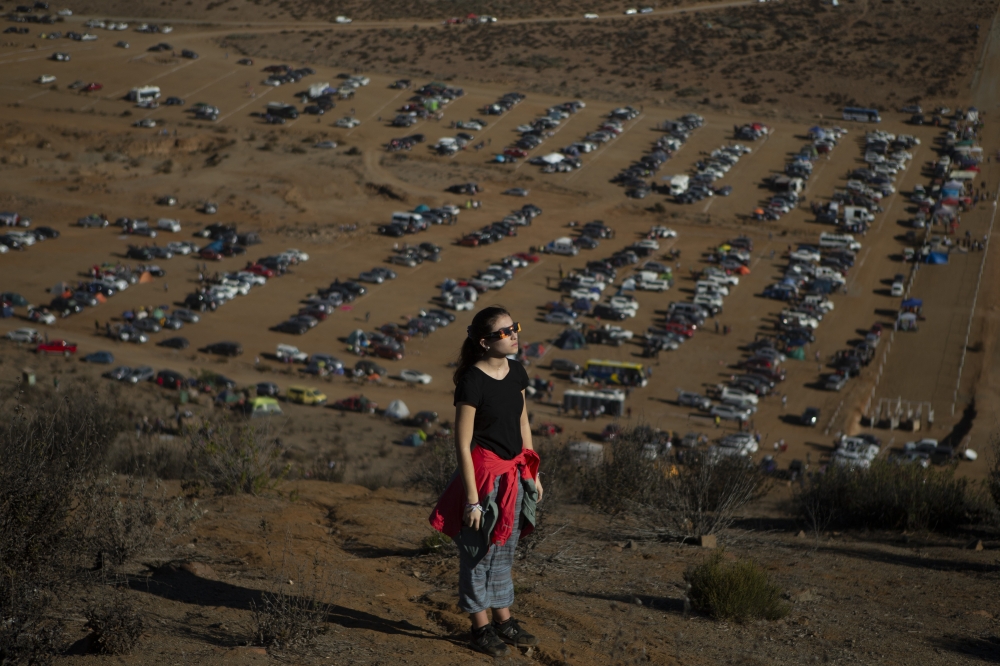 "In the past 50 years we've only had two eclipses going over observatories. So one when it happens and an observatory lies in the path of totality, it really is special for us," said Elyar Sedaghati, an astronomer working as a fellow at the European Southern Observatory in Paranal, Chile.

"We can finally use our toys during the day because it's always at night that we use them."

The town of La Higuera will also be plunged into total darkness.

"We hope this milestone will transform (our town) into a tourist attraction, so that visitors ... can come to La Higuera and take a picture where there once was a total sun eclipse," Mayor Yerko Galleguillos said.

Town officials distributed more than 2,000 cardboard-frame protective eyeglasses at local schools and community centers while workers built statues of huge sunglasses and a darkened sun on a local square.

A solar eclipse occurs when the moon passes between the Earth and the sun and scores a bull's-eye by completely blocking out the sunlight. 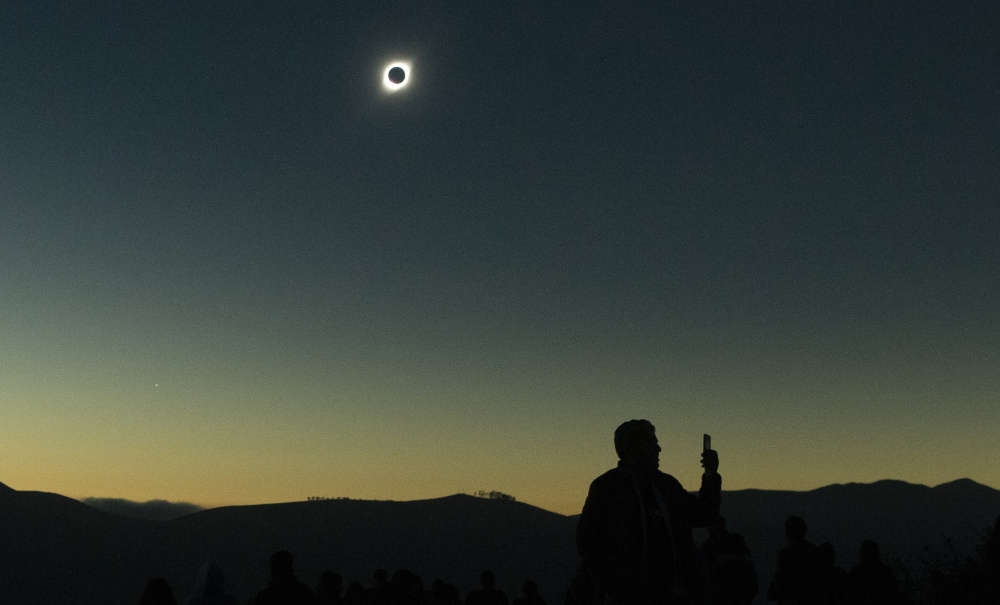 "It's going to be very dark and we're going to have a Milky Way in its full splendor," said Chilean astronomer María Teresa Ruiz. "I invite you to look at hundreds of thousands of stars."

Thousands of visitors also trekked to neighboring areas of Argentina where the eclipse also will be total.

The San Juan provincial government installed telescopes and public viewing areas. Meanwhile, astronomers in Buenos Aires province planned to offer yoga and meditation classes during the eclipse, which will also be partially visible in other South American countries.

Total eclipses are relatively rare for a particular spot. In 2017, millions of people in the United States witnessed the phenomena, with a full solar eclipse visible in parts of 14 states and a partial eclipse seen in nearly the entire country. It was the first such widespread eclipse in the U.S. since 1918.

Day will briefly turn to night Tuesday over large parts of Chile and Argentina as a total eclipse of the Sun plunges a vast swath of the southern Pacific and the cone of South America into darkness.

Both countries will be under the narrow, 6,000-mile long band that will experience a total eclipse when the Moon will completely block the Sun.

According to Chilean astronomers, the breathtaking natural phenomenon will begin at 13:01 (17:01 GMT) in the Pacific Ocean and a 95 mile (150 kilometer)-wide band of total darkness is set to reach Chile's coast 4.38 pm (2038 GMT), then cross into southeastern Argentina.

People in some areas under the path of the eclipse will experience more than two minutes of total darkness, the Chilean Foundation of Astronomy says.

"There's a lot of expectation. This is a historic event in the region," said Catalina Henriquez, who runs an astrotourism agency in Vicuna, a town 280 miles north of Santiago renowned for clear skies that have made it Chile's "astronomy capital".

Vicuna is part of the Coquimbo region that is dotted with observatories equipped with high-powered telescopes and where the eclipse will be strongest.

An estimated 300,000 tourists have flocked to the region where dryness, crystal-clear air and low light pollution has created a stargazers' paradise.

Matias Badilla, 19, said his family had been anticipating the event for years. "It's something we've been planning for a long time. For us, to see it so closely in such a beautiful place is something that we couldn't miss."

Thousands of people have descended on the nearby town of La Higuera, located on the so-called "path of totality," where the eclipse is predicted to last longest, around 2 minutes and 36 seconds.

Chilean President Sebastian Pinera and several members of his cabinet will watch the event from the La Silla Observatory, on a mountain peak towering 2,400 meters over the Atacama Desert, operated by the European Southern Observatory.

The observatory and its fleet of powerful telescopes will livestream the event on the internet and has also opened to the public, hosting school tours along with talks and workshops.

"The 2019 total solar eclipse will last about 1 minute and 52 seconds from the La Silla summit. The Sun will be setting just as the entire eclipse ends and the peak of totality will happen when the Sun is a mere 13 degrees above the horizon from the view of La Silla Observatory," the observatory said.

Further south, the capital Santiago will experience a near-total eclipse.

Solar eclipses happen when the Sun, the Moon and Earth line up, allowing the Moon to cast its shadow on Earth.

The next total eclipse will be visible in southern Chile on December 14, 2020.