A Chinese plane that slid off the runway at Manila airport was removed from the muddy spot where it had been stuck for more than a day, officials said, allowing normal operations to resume on Saturday.

Around 165 international and local flights were cancelled on Friday and Saturday at the Philippine capital's main airport after the plane's bumpy landing, said airport media officer Connie Bungag.

The Xiamen Airlines aircraft landed on its second attempt before skidding onto the grass, ripping off its left engine and blocking the runway late Thursday evening.

The 157 passengers and eight crew aboard were able to disembark without suffering any major injuries.

Moving the plane was complicated by heavy rains that softened the ground, making it difficult to install the two cranes needed to lift the aircraft, officials said.

By noon on Saturday, flights had resumed their normal schedule, but some passengers were not impressed by the speed of the recovery operation.

"At last," tweeted one disgruntled observer. "That's a record 36 hours."

Civil Aviation Authority of the Philippines spokesman Eric Apolonio said investigators had recovered the plane's black box and flight data recorder and would be summoning the pilots next week to find the cause of the mishap.

The airport will schedule special flights after midnight to make up for some of the flights that were cancelled earlier, Bungag told AFP.

A Chinese passenger jet slid off the runway as it landed at Manila airport in torrential rain, authorities said Friday, with all 165 people on board safely evacuated.

The Xiamen Airlines aircraft, carrying 157 passengers and eight crew, landed on its second attempt before skidding onto the grass and ripping off its left engine, airport general manager Ed Monreal said.

Four people suffered "superficial scratches" as they evacuated the Boeing 737-800 jet, which had flown to the Philippine capital from Xiamen in southeast China, he added.

"With God's blessings all passengers were able to evacuate safely," Monreal said, adding the cause of the incident was under investigation. 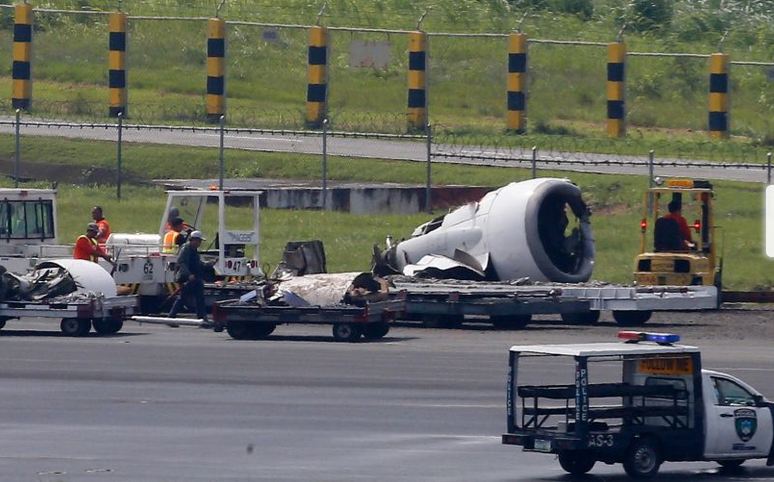 Civil Aviation Authority of the Philippines spokesman Eric Apolonio earlier told AFP the incident occurred in heavy rain and passengers and crew used an emergency chute to leave the aircraft.

Local television network ABS-CBN later aired photos of a group it said were passengers from the flight wrapped in blankets as they lined up inside the passenger terminal.

Chinese state news agency Xinhua reported the plane circled the airport for an hour before attempting to land.

The aircraft is still resting on its belly near the end of the airport's main runway where it came to a stop after the accident, which occurred late on Thursday evening.

The authorities lifted part of the body off the ground Friday morning to recover its cargo as well as its flight data recorder and cockpit voice recorder, both vital to determining the cause of the accident.

"The Manila (airport control) tower told us that the aircraft tried to land once, aborted, then circled back. After landing the tower lost contact with it," civil aviation chief Jim Sydiongco said.

The incident forced a partial shutdown of the Philippines' main airport Friday.

Aviation authorities have closed the airport's main runway until 4:00pm (0800 GMT), forcing some airlines to cancel, delay or reroute flights.

The runway for smaller aircraft remained open, but the authorities said the accident has delayed thousands of passengers, including holidaymakers travelling ahead of a long weekend.